As vegans, I feel like we are united by some really important beliefs and ideals. How we live our lives stands for something: we stand for animal rights, we stand for environmentalism, and we stand for health and nutrition. However, we are on the so-called “fringe” of mainstream society (I wouldn’t want to be anywhere else), and because of that we’re under a microscope. If we really want to make a difference, if we really want to make the world a better place, we must do so together. So why is there so much infighting? Why does blogging sometimes feel so competitive? Wouldn’t serving the community be a better use of our energy? And why does it seem so hard to make Vegan Friends?

I love making Vegan Friends. And nothing makes me quite as happy in quite the same way as having a community of Vegan Friends, both online (read: around the country and the world) and in “real life.” 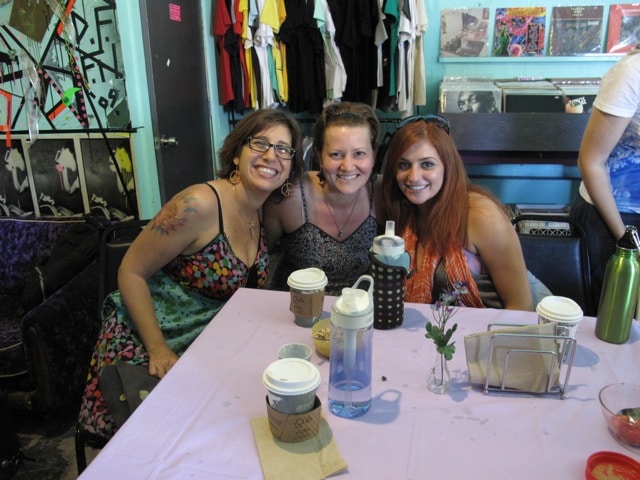 Last year, I’d been considering a move to Austin. It fell through for a variety of reasons (and I know now that I am meant to be in Miami Beach), but that didn’t stop me from my Amazing Austin Adventure (and by adventure, I mean awesome vegan food binge) last October. And you know what made that weekend so very amazing and awesome (besides the food)? Making Vegan Friends. Through the magic of social networking (primarily Twitter, I can’t recommend it enough), I met a whole lot of people, and upon arriving in Austin, I had people to hang out with. I went to a Meetup at The Vegan Yacht and a Halloween party with people from Vegans Rock Austin. I spent the day driving (and eating) around Austin with my friend Nanette, who taught me all about the neighborhoods I wanted to live in.

What drew me to Austin was its thriving vegan community. At that point, there were not a lot of vegan or vegan friendly places to eat in Miami, and my only Vegan Friends were online. It was lonely locally. But as I said, my move to Austin fell through, so I started to focus on finding ways to help create the kind of vegan community in Miami that they have in Austin.

I started to do some searching, and I discovered that while I’d been preparing to move, more and more vegan and vegan-friendly restaurants were popping up in the area. Meetup groups had become more active. The vegans I’d been looking for were coming out of hiding! And they were all doing some awesome stuff! Activism! Potlucks! Waffle Parties! I could finally make me some local Vegan Friends! Do you hear the choir of angels singing?!

As thrilled as I am with this blossoming vegan community locally, I also have a deep love for my online Vegan Friends, many of whom I have plans to meet in real life, some of them sooner than others! Our online connections are so important, especially for people new to veganism, or living somewhere without a strong local vegan community.

And if you don’t have a strong vegan community yet, you can start building one. There are Vegan Friends in your city too, you just don’t know them yet. Here are a few tips: