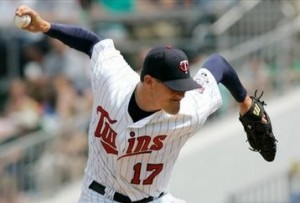 Minnesota Twins relief pitcher, Pat Neshek, is vegan and proud of it.  He recently sat down with the Star Tribue to talk about his life, career and his vegan diet.

Pat says that he became vegan in 2007 after he read “The China Study” by Dr. T. Collin Campbell and Thomas Campbell II.  And while ethics wasn’t his main focus he does say that he “…like(s) knowing everything I eat was served in a humane way.”

But being vegan in a major league baseball team means that he gets teased from the other players.  He says:

[manager Ron Gardenhire], he’ll make fun of me and stick a hot dog in my face and say, “You want to eat this?”  A lot of guys are curious.  Most of the time, there’s a lot of guys that make fun of you.”

But getting teased doesn’t faze him at all.  For him, his food choices means better health and a better game.  Pat says it best when he said “It’s pretty neat to know you don’t have to use animal products and can still function — most of my results had improved.”

There you have it.  One more athlete proving that animal products are not necessary and can, in fact, lower your performance levels.  And what athlete wants that?  Because, in Pat’s own words:

“You have to get your sleep and take care of yourself and all that stuff — it’s not a cakewalk. It’s 220 days out of the year we’re playing, and if you’re not ready, somebody else is going to take your job.”