This is the story of Tully Banks, the little calico cat who walked into oncoming traffic, and how she came to live with me. This is part two, so if you missed part one you can find the full story right here, Cat Rescue: The Story of Tully Banks.

Before I go on, I wanted to thank everyone for leaving such sweet comments about Tully here and on Twitter and Instagram. Some of you told me stories about animal losses you had experienced. I appreciated every single story. Loss is not an easy topic, but one that’s important to talk about regardless. 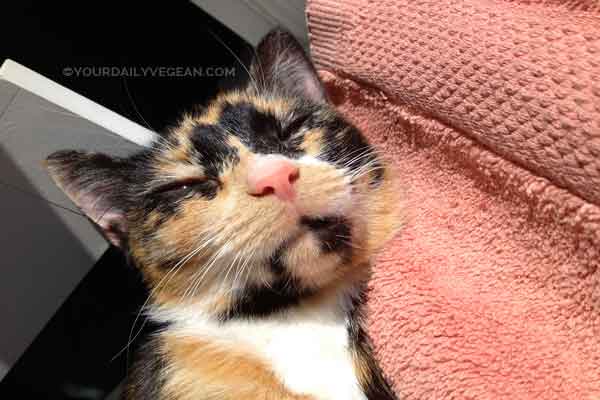 Any time you bring a new cat into your home, it’s a good idea to keep them separated from existing animals in the house for the first few weeks. This is for a few reasons. It allows the cat adequate time to adjust to new surroundings without having the added stress of meeting new animals. It also allows the other animals time to adjust to a new smell. And probably the most important, the incubation time of two fatal viruses: Feline Leukemia Virus (FeLV) and Feline Immunodeficiency Virus (FIV or Feline AIDS).

Standard disclaimer- I’m not a veterinarian. Please do not use the information contained in this article to diagnose or treat any disease. This is for informational purposes only.

Feline Leukemia (FeLV) can be spread easily through the saliva from a cat who is infected with the virus. It is passed from one cat to another by grooming, eating together, touching noses, or spitting at each other in a fight or even through a window screen. Feline Immunodeficiency (FIV), on the other hand, is more difficult to transmit from one cat to another, with the primary mode being bite wounds. Both are fatal.

Stray or feral cats are at a high risk for these viruses, so it’s a good idea to take kitty to the vet for an initial checkup within days of bringing them inside. The veterinarian will perform an initial FeLV and FIV at that time and again in four to six weeks. In cases where the cat is suspected of being recently exposed to FeLV, a vet may suggest re-testing again at the three month mark after the incubation period is over. I kept Tully separated from my existing household. But don’t feel too bad for her; a life of extreme spoiling awaited.

It all started with the nipples 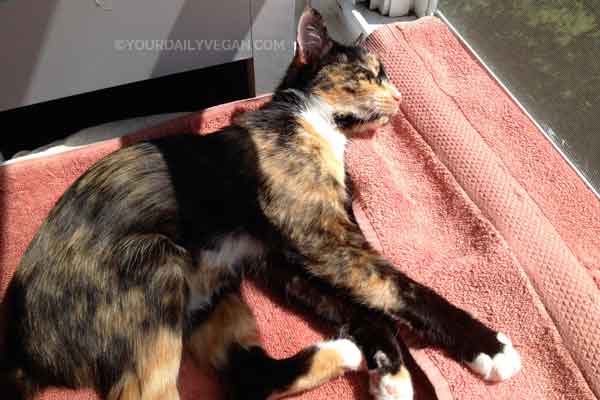 Because of her size, I thought Tully was a kitten. And because I gave Tully a bath, I knew about the nipples. They were larger than any kitten nipple I had seen before. [That completes the list of “things I thought I’d never write ever.”] I immediately thought that she was pregnant, but just as quickly dismissed it because she was so small. Within days we were at the vet’s office for her first checkup. I also wanted to know about the nipples. And what my vet said made me cry.

There is this thing about me that is always true and has always been true- I am profoundly emotional when it comes to animals. So when my vet said that it was possible that Tully could have recently given birth to a litter that didn’t survive, yup, I cried. I asked if it was possible if Tully could currently be pregnant. After feeling around her belly for awhile the vet said that she didn’t feel any kittens, but that it was still possible- we’d have to wait a month to see. She joked, “She could have gotten pregnant the day you found her, you know. Wouldn’t that be something?”

Yes, wouldn’t that be something?

The results are in

I took Tully in for her FeLV and FIV test when she had been living with me for six weeks. And yes, she still had those nipples. Within the first three minutes into the examination, the vet declared he felt three babies. Tully was pregnant. And, going by the date she was found and the date of the vet visit, it was determined that it was likely that she got pregnant the day she was found. Suddenly, rescuing one cat turned into rescuing four. My head was spinning.

Kittens. What the hell was I going to do with kittens?

What the hell was I going to do with kittens?! 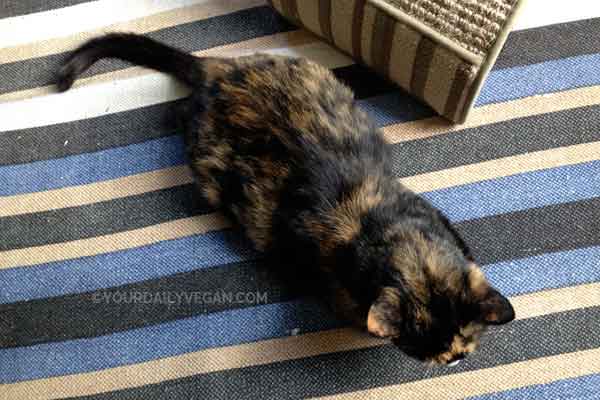 Tully was halfway through her pregnancy by the time I found out. I read somewhere that you should place a birthing box in the room with a queen (a pregnant cat is called a queen) so that she can become familiar with it. So, I bought a large moving box and lined it with sheets and placed it in the corner. I started slowly upping her food intake, first to three meals a day and then to four. I weighed her every week. I read article after article about what to expect when your cat is expecting. I worried about what I was going to do with the kittens.

Seriously, what in the hell was I going to do with three kittens? 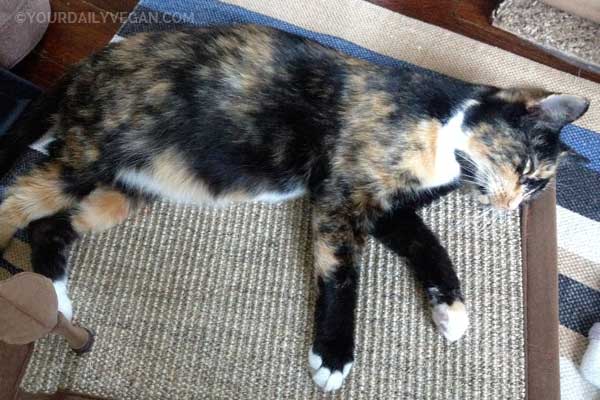 As her pregnancy progressed and her belly got bigger, the friendlier Tully became. I had been trying to woo her affection since the day we met, so this change in behavior was a welcome one. Slowly, she started sitting in my lap for a minute or so at a time. She began purring. And then this thing happened, this amazing thing.

After weeks and weeks, Tully finally felt comfortable enough to lay with me to take a nap.  She climbed on my belly and laid down. As I laid there, still as a board because I didn’t want her to leave, I could feel the kittens inside her belly move against mine. Any mother or anyone who has felt life move inside of a mother can attest how indescribable it feels to have life fluttering underneath your palms. It was amazing. Obviously, such an emotional moment with such a special gift should be documented. With a selfie, naturally! 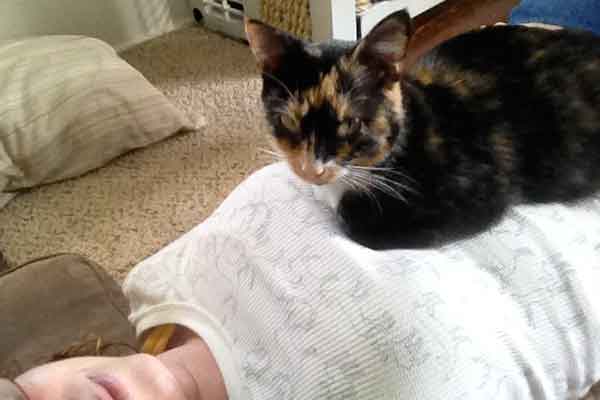 Tully’s pregnancy went like clockwork. She got pregnant on July 19, 2014 and gave birth on September 19, 2014. Tully, bless her, gave birth in the box as I intended and without so much as a peep. Which is more than I can say for myself- I probably said “oh my god” eight million times watching Tully give birth.

The first kitten was born at 9am, a little grey tabby. A boy. 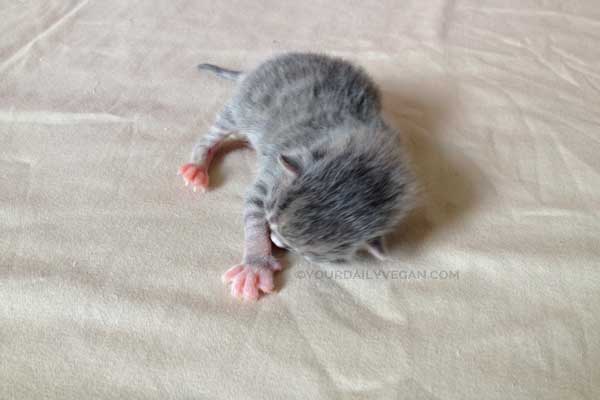 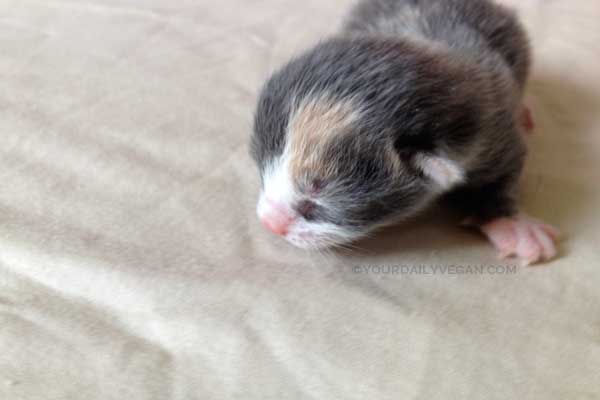 And the third kitten came at 11:30am, a black and orange calico. A girl. 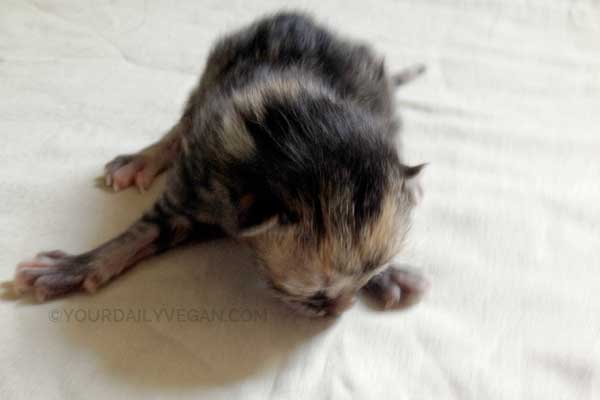 A family was born. 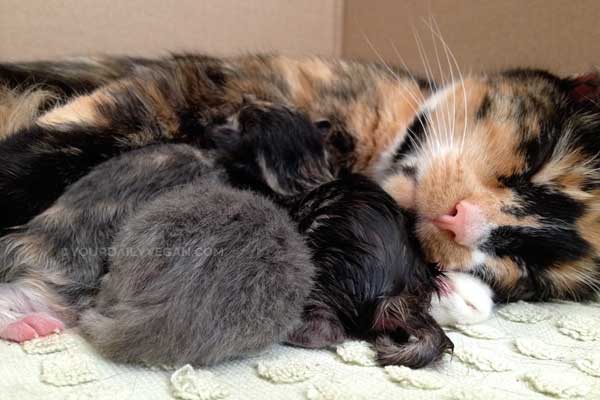 I have been talking about Tully Banks on social media since the day we met. Hell, I’ve even created her own hashtag, #tullybanks. I may not have been happy about her arrival initially, but from the moment we met I have loved her. When I found out she was pregnant, I decided not to say anything about it until she gave birth. I knew I would eventually tell her story and I didn’t want to do it in bits and pieces on social media.

I have never experienced the birth of an animal before. Being around life so new was incredible, and watching Tully with her babies is something I’m not likely to forget. Awed, I took ten million photos and I started posting the pictures online. There is one thing universally true about the internet: everyone loves cat photos/videos. I started getting comments asking if I had gotten Tully pregnant on purpose, or if I was willing to sell and/or give away one of the kittens when they were “ready.”

No, no, and no. Just, no. Breeding animals is so much no.

Approximately 7.6 million dogs & cats enter animal shelters nationwide every year. Of those, 3.4 million are cats. Euthanasia in animal shelters is the number one documented cause of death of all cats in the US. According to the most comprehensive study done to date, 72% of all cats entering these facilities are killed. A mere 23% are adopted, and only 2% are reunited with families. (1) (2)

While impossible to verify, the estimate for the stray cat population in the US ranges up to 70 million. The average number of litters a fertile cat can produce is one to two a year. The average number of kittens per litter is four to six. That means that the average, unaltered female cat produces eight to twelve cats a year.  And male cats? Lots and lots of cats per year.

I don’t know one person who wants another cat, let alone twelve or more.

Tully is lucky. She walked in front of the right car at the right time. Neither she nor her children will be a part of the cycle of overpopulation, even if that’s exactly how they all came to be. I mentioned this in my last post, but I wasn’t looking to adopt any more cats. And now there were three more. What the hell was I going to do with three kittens? I’ll tell you what I wasn’t going to do, I wasn’t going to keep them.

But that’s a story for another day.

Here’s what you really came to see though, the Banks babies :)