I’m going to admit it straight away- I wasn’t happy when I got the call, not at all. I wasn’t mad exactly, but I was. I hung up the phone and began to walk around, gathering all the things I would need, mentally planning all of the serious maneuvering that I was going to have to do. And it was raining, naturally.

I watched for the car to pull into the driveway, and when it did I went outside with a blanket. Out of the car came the dirtiest looking ball of fur I’d ever seen. Sighing, I wrapped the animal in the blanket and walked into the house and straight into the bathroom. I set the blanket on the ground and unwrapped it to find a small, wide-eyed calico cat staring me, not making a sound.

I sighed again, looking at the little shivering cat sitting on my bathroom floor. She was covered in mud and soot from the metal recycling plant where she had been found- or rather, where she decided to walk into oncoming traffic to be discovered. But I didn’t know that story just yet. The priority was getting the cat clean, dry, and fed if she was interested.

First up, the bath.

Have you ever bathed a cat? Did you need tequila and bandages afterwards, too? And bathing a stray cat? You’ll need a bottle of vodka as well. I was prepared for a bathing battle, but the cat never moved- she let me wash the dirt from her fur and towel dry her without so much as a peep. 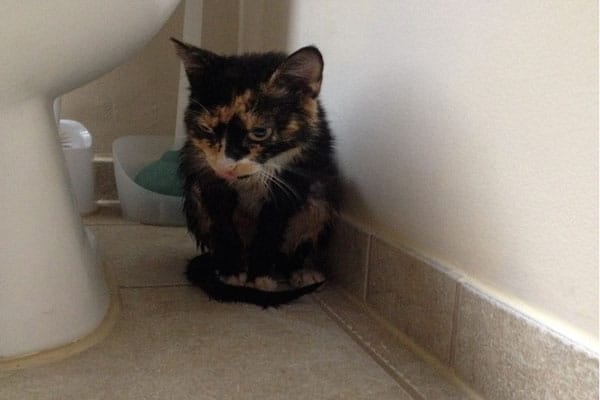 I checked for fleas after her bath. My heart sank as I raked the flea comb through her fur- she was infested with fleas. Lots of fleas. Big ones. I sighed again, this time much more exaggeratedly because of course there are fleas, of course there are.

I proceeded to pick fleas off of her for the next hour or so. I talked softly as I worked, asking silly questions, complimenting her beauty, and petting her gently. You know, the things one does when trying to impress a new cat. She fell asleep, obviously exhausted from the whole ordeal. I felt bad for her, really I did. But all I could think about, sitting there watching her sleep, was, “Great. Now the whole house is going to become infested with fucking fleas.”

And it did. Of course it did.

I’ve been rescuing cats since I was in my twenties, which I like to pretend was only a few short years ago but it’s really more like a decade or so ago. In that time, I’ve rescued 13 cats- five were adopted out to forever homes, one was too sick to save, and seven of them came to live with me because I couldn’t find them a home. Somewhere along the way, three dogs also came to live with me. It’s been a full house for many years.

There’s this thing about sharing your life with animals that people don’t tell you, but you already know- cats and dogs don’t live long. Of course I knew this, everyone knows this, but I had never experienced it. As a child, my family was never without several animals, but my parents didn’t feel comfortable exposing my brother and I to death- all of the animals we lived with eventually found themselves with other families.

[Yes, this was misguided. It was a long time ago. My parents have evolved so much since that time. Every animal they’ve rescued since then (and there have been a lot) has lived with my parents doting on them until their death.]

Rescuing a lot of animals means that you experience a lot of death. The first cat who died was the first cat I ever rescued, Kitten. One might assume that since I lost my son I would handle the loss well, but one would assume wrong. I’m ridiculously soft-hearted when it comes to animals. Kitten’s death devastated me. And it was only the beginning. Of the original seven cats and three dogs that I adopted, only three cats and two dogs are still here. Those left are aging: now 9, 10, 12, 15, and 20 years old. All seniors.

The deaths of the animals have been very hard for me. The losses have come one a year, every year, since 2011, and only after a lengthy battle with a debilitating disease. I feel guilty saying it, but hospice care is not only physically and emotionally draining, it’s expensive. It consumes your entire life. For the past four years I’ve been caring for several terminally ill animals. I’ve syringe fed them, stayed up late with them, and slept on the floor beside them. I’ve taken them for weekly vet visits and appointments with specialists. I’ve rearranged my life so that I can be here with them during the day, just in case, and I’m never away longer than a few hours at a time. I haven’t taken a vacation in seven years. Don’t misunderstand- I’d do it all over again in a second and continue to do it today. It’s just hard. And if I’m honest, it sucks. The hospice situation, not the cats. The cats most definitely do not suck.

Worn down from the stress and heartache of it all, I decided I wasn’t going to adopt any more animals. Help animals forever, yes. Bring more home, no.

So you can see, I wasn’t thrilled when I got the phone call about the cat. Do you know a lot of people who are ready and willing to adopt a stray cat? I do not. I wasn’t ready myself, especially since I am still caring for one terminally ill cat. But, what are you going to do? Probably what I did, which is adopt her. I certainly wasn’t going to turn her away. 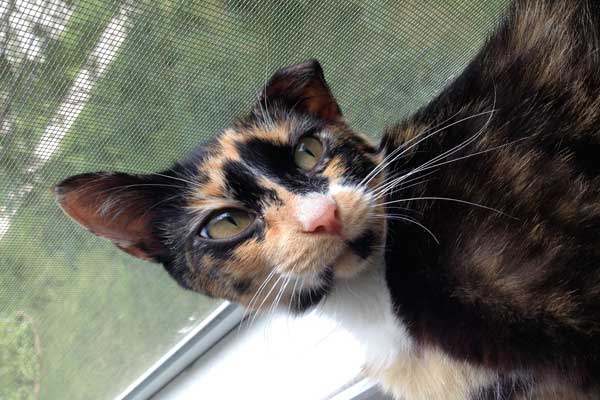 I ended up naming the little stray Tully Banks. Tully because it’s cute, and Banks after the name of the road she was found on. Tully had to be segregated from the rest of the household for the first six weeks until she could be screened for feline leukemia, so I turned my upstairs office into a room just for her. We spent the next few weeks getting to know each other. I spent hours with her, hoping that we’d become friends and she would adjust to living inside. She was sweet, but standoffish. She hated anything soft. She would only sleep on the floor, which made me sad for some reason. She liked to play.

Several days after her arrival, I took Tully to the vet for a general checkup. She was severely malnourished, weighing barely five pounds, but was otherwise healthy. We got rid of the fleas (and the worms) and set out to fatten her up. Tully would get her first round of shots after her leukemia test.

What I didn’t know was that, as I worked on trying to make Tully comfortable and healthy, she was working on a plan of her own. Tully had a secret. And I wouldn’t find out what it was until a month after she got here. 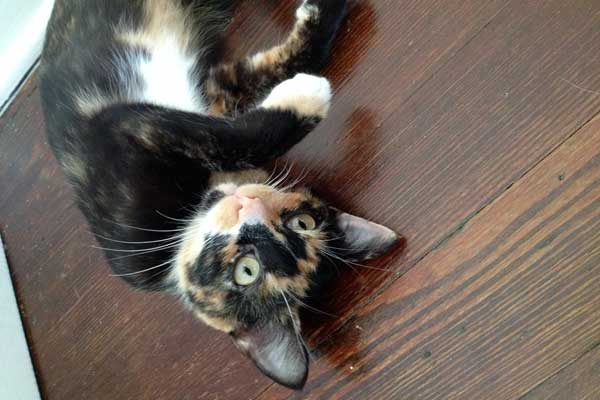 Tully has a secret

This is Part One

This is the first in a series of articles about Tully the rescue cat. Over the next week, I’ll be sharing her story and the challenges that we’ve faced together- and more, but I can’t say anything else because I don’t want to give away her secret!