I’d like to clear up some confusion regarding the post published last week titled, “Ohio State Issue 2.” 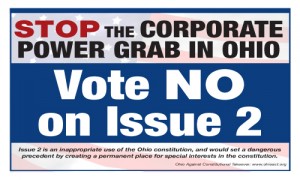 For those of you who have not read the language of Ohio House Joint Resolution 2, which put Issue 2 on the ballot, or the language of the ballot initiative, Ohio Issue 2, I want to sum it up for you again.  Issue 2 does not propose to seek more humane ways of farming, unlike California Prop 2.  Issue 2 is a state constitutional amendment that creates an appointed 13 member board comprised mostly of supporters of corporate (factory) farms in the state of Ohio.  This board would have oversight of all livestock care standards as relating to the animals and food safety.  The decisions made by this board would trump any by the Ohio Department of Agriculture and the Ohio State Legislature.  I want to stress again, this is a constitutional amendment granting livestock producers the power to regulate themselves.  It is a preemptive move by agribusiness in the state of Ohio to stall any future legislation regarding animal rights as it pertains to livestock.  This issue has nothing to do with creating “more humane” livestock farming practices.  The only similarity to California Prop 2 is the number “2,” which was chosen by the farm lobby to dupe more liberal voters into thinking this issue is similar to California Prop 2 and will create better conditions for farm animals, as was thought in California.  This issue is presented to more conservative voters by the farm lobby, as being necessary to forestall any future legislation by the Humane Society and their “radical vegan agenda” (their words).  As such, YDV does not support this issue and is urging Ohio voters to vote against this attempt by the farm lobby to regulate their own industry with impunity.

Now, that said, I would like to address a statement I made in that original post.  “This issue is nothing more than a power grab and a preemptive move by corporate agribusiness to stall any future legislation that would actually provide real care for farm animals, such as Prop 2 that passed in California last year. ”  Perhaps in my haste to publish the piece in advance of the November vote, my wording of this came out inaccurate.  I had insinuated that California Proposition 2 will provide “real care for farm animals,” which of course, it will not.  Let me stress my position here that I believe there does not exist a “humane way to raise animals for slaughter-” the statement itself is absurd.  ALL exploitation of non-human animals by humans has no place in a civilized society.  Some supporters of Ohio Issue 2 have stated that the Issue is needed to prevent legislation such as California Prop 2, and further, have stated that it is needed to defeat a “radical vegan agenda.”  Again, my wording of this point came off as appearing to imply that I believe Prop 2 will provide real care for animals, and I apologize for that misrepresentation.

However, I would to to take this opportunity to distinguish between all out support for welfarist ideology (which does nothing to further the abolition of non-human animal use) versus making a decision to support legislation to prevent special interest groups from unbridled power.  While I would have never introduced legislation such as California Prop 2 (not that I’m in a position to do so anyway), I certainly would have voted for it.  Why, you ask, would I vote for something that I do not wholeheartedly support?  The same reason I chose to vote for Kerry in ’04 and Obama in ’08.  I’m an Independent, an American voter, and I’m going to take advantage of it.  When it comes to legislation relating to animal rights, I’m going to take a position.  Voting against Prop 2 would have been a victory for livestock “farmers” in California.  Now, accepting Prop 2 as a final initiative for non-human animals would also be a victory for livestock farmers, and that is unacceptable.  We should still be fighting for the complete abolition of livestock farming.  Not voting against Ohio Issue 2 will be a victory for livestock farmers as well.  This is a chance for the Ohio livestock industry to make its own rules, and we cannot let that happen.  I do not support California Prop 2 as a be all and end all for “humane farming practices.”  And, I do not support any future Ohio legislation that would do the same.  These are but two battles in what is, and will be, a long, hard war against the exploitation of non-human animals.  A battle is just that, an event within something bigger- a revolution.  Eventually one battle will be the last, but this one is not it.  In the meantime, please keep this in mind,  there’s an old saying when engaged in a fight, “the enemy of my enemy is my friend.”  On Tuesday, November 3rd, Ohioans- citizen voters, the enemy of your enemy is the defeat of Ohio Issue 2.  Go to the polls on Tuesday and win this battle- for the chickens, the cows, the pigs, the lambs, the goats, the turkeys, and all the others not mentioned who suffer every- single- day.  Do not put more power into the hands of those who kill non-human animals.

VOTE NO on OHIO STATE ISSUE 2.