Arby’s Wants Attention, Will Mock Vegetarians to Get It

Share90
Tweet45
Pin3
Reddit
Buffer
Today in Incredibly Stupid Things Companies Do, Arby’s published an open letter addressed directly to (American) vegetarians. While (American) vegans were not mentioned specifically, I think it’s safe to assume that Arby’s directed the open letter to anyone (in America) who doesn’t eat meat. Arby’s, a once-popular fast food restaurant whose slogan is ‘We Have the Meats,’ wants (American) vegetarians to know that they respect you and your life decisions… but they are also going to mock you.

Here’s the open letter in its entirety (so that I don’t have to link to it, thus driving more traffic to Arby’s):

An Open Letter From Arby’s to Vegetarians Across America:

We respect you. We respect your life decisions. With that in mind, we want it to be abundantly clear that this letter is not meant to sway or convert you. We’re sharing this to offer our support.

Nearly a year ago, we embarked on a journey to tell America about our meats. By now, you’ve likely heard the Arby’s tagline: We Have The Meats®.  It’s tough to hear, but it is what it is. We have many meats. And we have quality meats.

It is understandable that you disapprove of our meat-bravado. Your voices have been heard. Letters, emails, voicemails, Tweets and Facebook comments – we hear you. We love our meats, but realize they’re not for everyone.

Then on Sunday, June 28, we launched a meat innovation that has likely tempted you: Brown Sugar Bacon. It’s our pepper bacon, glazed in-restaurant with brown sugar and then cooked to perfection. It may be hard to resist…even for you. Hardcore vegetarians likely won’t budge, but for those of you who are on the fringe or new to the game, avoidance can’t be easy.

We, at Arby’s, have created this temptation. So, we’d like to help.

We’re giving you a number to call: 1-855-MEAT-HLP. This is a Vegetarian Support Hotline. When your nose betrays you and alerts the rest of your senses to find and devour this sweet meat, please call 1-855-MEAT-HLP. You will receive the support you need to resist this gateway meat and get tips on how to avoid temptation. Delicious. Sizzling. Temptation.

Be strong. We’re here for you.

I have not visited the website or called the 1-800 number, but Daniela Galarza at Eater did. Here’s what happens if you call that number:

…you’ll be greeted by a soft-spoken female: “Hello, you have reached the Vegetarian Support Hotline…” You are given two options: Option 1 is for vegetarians who can’t stop thinking about the bacon; Option 2 is for vegetarians who have already given in and eaten the bacon. Callers are either instructed to “take a deep breath… and go with the salad” or are told “you’re secret is safe with us.”

This is 100% a marketing ploy to get everyone talking about, and linking websites to, Arby’s. And it’s working. Already there are more than a few responses from vegan bloggers. I read several that started out the same way: “I don’t respect you,” continuing on using words like flesh and corpses*- which, I don’t know, seemed like it played right into what Arby’s was looking for- the stereotypical angry vegan/vegetarian responses à la PETA-esque style ranting on social media.

* I’ve never felt completely comfortable using ‘corpses’ to describe meat. I understand that it’s technically correct, and that some advocates want to paint a vivid picture of the atrocities that are done to animals as a result of our desire to eat them. But for me, using such an emotionless word to describe a once beautiful, sentient animal feels a little like I’m reducing that life to an analogy to further the vegan agenda. I’d rather focus on the animal and paint the picture of the individual who died, not what happened after they did.

A spokesperson for Arby’s has confirmed that the sarcastic, didactic tone of the open letter and hotline was “completely intentional.” Basically they’re admitting that they are resorting to school yard tactics to get attention. Is it any different than an errant Twitter message from someone who cares about the feelings of plants or can’t live without cheese or any of the other reasons from Defensive Omnivore Bingo? 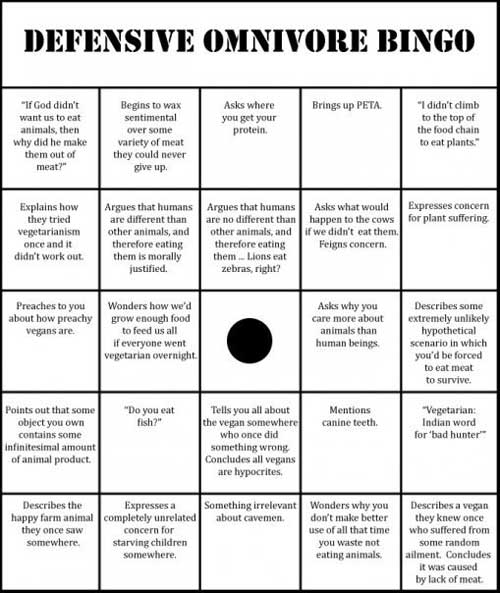 Ad Agency: “We thought you could get people talking by mocking vegetarians with bacon. Everyone thinks that’s funny and the vegetarians will rage all over social media. It’s a win-win!”

Listen, I’m all for telling it like it is via unapologetic vegan activism, please don’t misunderstand me. I’m also not saying that vegan advocates shouldn’t respond to Arby’s little PR stunt, we should- absolutely, without a doubt. I’m a firm believer that the more people know about the lives of animals, the more that they will see these animals as individuals and not food. Shouldn’t we start out with respect and a willingness to have a discussion? Even in the face of school yard antics? Especially in the face of school yard antics?

Who’s going to listen if the first words are how we don’t respect them? Non-vegans? Not likely.

Some might say that Arby’s doesn’t really deserve respect given the industry that they are in. Some might even say that vegans have a right to respond to Arby’s in the same manner in which they were spoken to. How we treat others is certainly up to each of us to decide, but let me ask you this:

Shouldn’t we educate people and pull the curtain back on animal agribusiness and those companies who profit from the lives of animals?

If we are asking people to respect animals, including ourselves and veganism in general, shouldn’t we also show people how to do that by responding to marketing ploys in an educational, savvy way? I’m not saying that vegans shouldn’t have sass and passion. What I am saying is that animals suffer every time we can’t get our message across. And we can’t get our message across if the people who need to hear it the most are turned off at the first sentence.

Before I go, I also want to tell you that you don’t need to get bacon from a pig. No indeed. Get the full 411 on all things vegan bacon (recipes! shopping guide!) by checking out the Amazingly Thorough Totally Rockin’ Vegan Bacon Guide.

So, what do you think? Tell me in the comments.