Road Kill as “ethical fur” for fashion, but is it?

Who wants to wear Road Kill?

Metalsmith/jeweler/taxidermist, Lucy Jenkins, has designed gold-plated bangles with fur which is “sourced” from actual road kill. 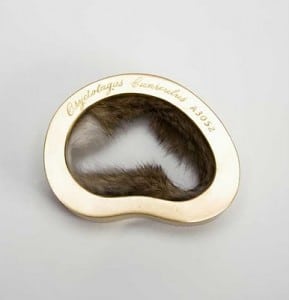 The use of Road Kill here is an attempt at using “ethical fur” for fashion.  But is it?  Sure, the animal is already dead.  But is that the end of the argument?  Ultimately, these animals are (accidentally) killed by human action.  Perhaps instead of claiming the jewelry is made from “ethical fur,” the artist could have used the opportunity to express and expose the travesty of the very concept of Road Kill.  Some may argue that the artist is doing just that by engraving the animal and road name into the bracelet.  I would almost concur if the term “ethical fur” had not been used.

“Ethical fur” is no different than buying a leather jacket at the thrift store.  They both promote the idea of wearing animal skins.  The goal of veganism is to eliminate the use and abuse of all animals on this planet- not to sanction “humane” or “ethical” practices of inducing death for human purposes.

So, who of you would wear Road Kill, and why?  Let’s hear your thoughts.

(Thank you to Caroline for the heads up)