Save the Elephants receives $20,433 donation after GoDaddy fallout 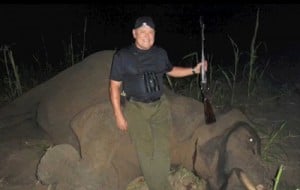 A disgraceful photo of the arrogant Bob Parsons and his "trophy"

By now everyone has heard that GoDaddy CEO Bob Parsons shot and killed an elephant in Zimbabwe.  Maybe you’ve even seen the video.  I’m sure you’ve heard that a competitor, Namecheap, was offering to switch GoDaddy customers for a low fee, as well as donate a portion to an elephant rescue group.

Many a vegan, myself included, spread the word to encourage people to switch registrations to another company.  Are you wondering the results?  Well, Namecheap agreed to donate $1 for every domain moved and they sent a check for $20,433– so that means that 20,433 domains were moved as a result of Parson’s actions.  And that is just the folks who moved to Namecheap.

GoDaddy obviously doesn’t give a shit that you left though.  Know what Bob Parsons says to you?

For anyone leaving GoDaddy, someone new has come. It has had minimal impact—and probably overall, I see it as a net positive. All publicity is good publicity if you’re on the right. I can’t quantify it for you. I didn’t do this to promote GoDaddy. But the average American is a reasonable individual, and they see this for what it is. They can see past the PC bullshit. When the only argument

[critics] have is to ridicule me, that’s when I get a customer.

Bryan Walsh, a Time.com report, had this to say in a the article GoDaddy CEO on Shooting an Elephant: I’m Not Sorry:

Parsons told me he spent $60,000 to $70,000 for his elephant safari. That’s obviously money that could have gone to any number of organizations that deal with human-wildlife conflict, like WWF, the Wildlife Conservation Society or Conservation International. Or, if Parsons wanted to directly help the people of Zimbabwe, he could have donated money to an NGO like Operation Bootstrap Africa, which has a five-star rating from the watchdog Charity Navigator.

Bryan, I agree.  So to sum it up, Bob Parsons doesn’t give a shit about you or your values- will continue to spend his “vacation” money on killing animals- nor does he think it’s going to impact his business.

I’m no businesswoman nor do I play one on TV, but I’d say the 20,000+ people is an impact.  It’s the Power of Small and we should keep the momentum going.

One last note, I’ve read plenty of posts on this subject.  There are vegans who have pointed out that moving domains to another company is futile, as the new company is most likely not vegan.  While I agree that we should not get caught up in single-issue campaigning, I completely disagree that moving your domain(s) is (are) futile.  First, every opportunity to (peacefully) stand up against atrocities towards non-humans should be taken.  If we are against animal use in any way, then we are against elephant hunting and egregious CEO’s- our actions should reflect that.  Second, you can try to move your domain(s) to a vegan company.  I’ve been told that Manica Net is vegan owned, though I haven’t verified that (and it isn’t listed on their website anywhere).  What I can tell you about them is that they also will be donating money if you transfer to them (100% of the first month’s hosting fee and $2 for every domain transfer) and they volunteered at an elephant sanctuary in the past. (promotion runs until the end of April so you still have time to switch)  It’s worth looking in to.

Sometimes we use our money in place of our voices, but the outcome is still the same- we are heard.

Note: Your Daily Vegan, like other bloggers, will be moving our domains to another registrar.  Due to our domain expiration dates, if we were to move our domains now, GoDaddy would actually make money rather than lose it since our domains all renewed in January.  I will not permit GoDaddy to earn another penny from me, I will move all of my domains upon expiration.

KD Traegner is an unapologetic vegan. She believes that animals besides us, and including us humans, have the fundamental right to a natural and free life. She is compassionate, believing that her choices matter, and she takes that power seriously.

Her mission is simple: to bring the vegan evolution to the masses, connect vegans with other vegans, and support vegans in their own lives, as well as their advocacy work. She does that through the use of her website, Your Daily Vegan, and her big mouth.