What is silk made from, and is it vegan? The answer might surprise you. 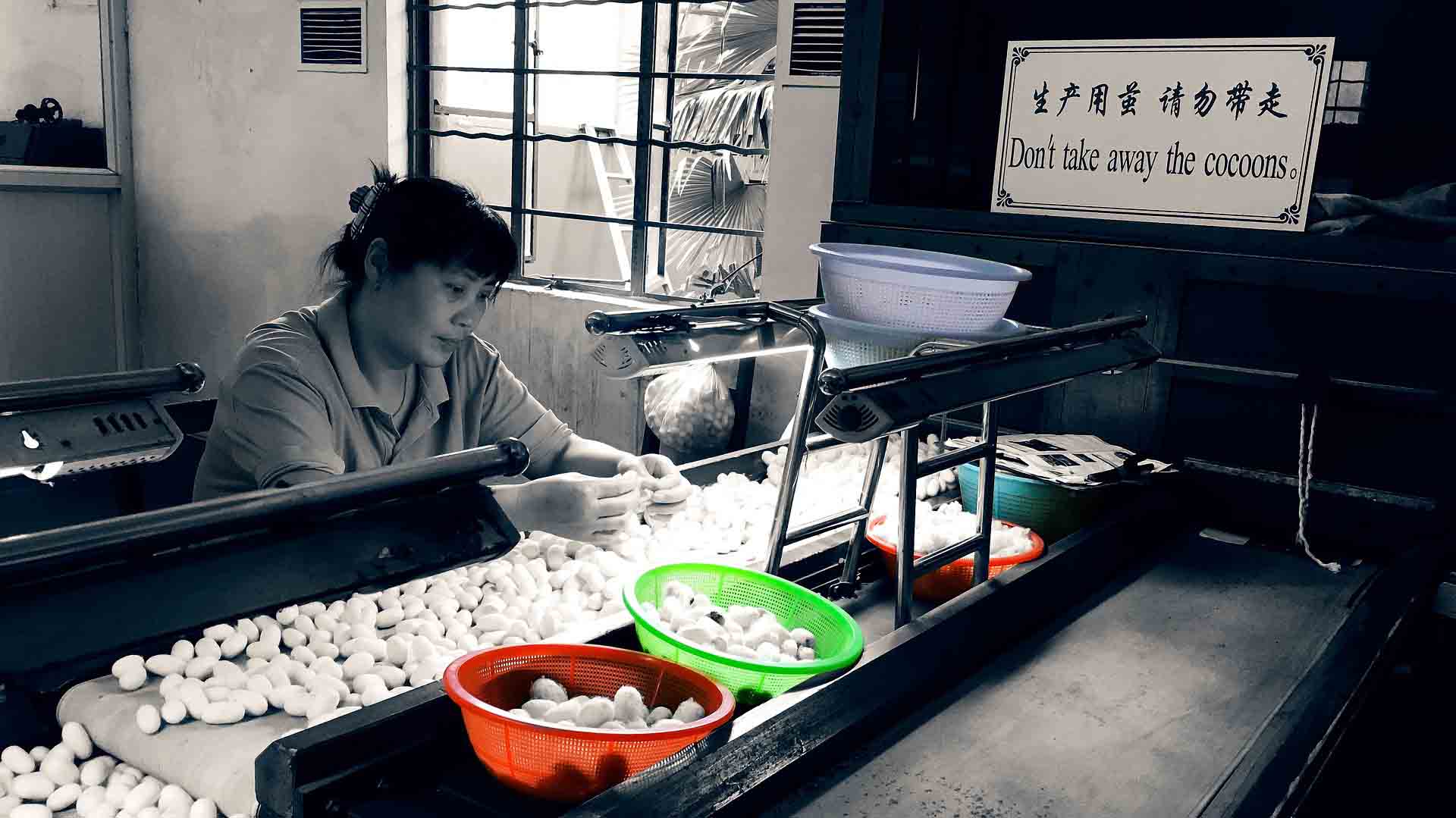 Silk is synonymous with luxury; it’s known for being soft, delicate, and lustrous. You’ll spot it in clothing, bedding, furniture, and paper products like wallpaper or stationery. It’s easy to understand why vegans don’t eat meat, but reasons for avoiding fabrics like silk aren’t as straightforward.

Foreword: The human cost of silk

It would be wrong to discuss the ethical problems with the silk industry without also mentioning its human costs because they're pretty big.

The global silk market rose to an estimated $14 billion in 2021 and will continue to climb to a projected $22 billion by 2027. (1) Huge numbers like this are made through child labor, bonded or slave labor, and the exploitation of vulnerable Asian communities.

According to the U.S. Department of Labor, The Bureau of International Labor Affairs, the silk industry uses child labor in India and forced labor in Uzbekistan. (2, 3)

» Silk's Dark Side: Uzbek Kids Made to Grow Cocoons

Not only that, according to the Sustainable Apparel Coalition's Higg Index, silk has bigger impacts on the environment than almost any textile, natural or synthetic.

Veganism is anti-oppression and intersectional. Environmental devastation and the enslavement or exploitation of vulnerable people are vegan issues.

Silk isn't just bad for caterpillars; it's bad for humans too. 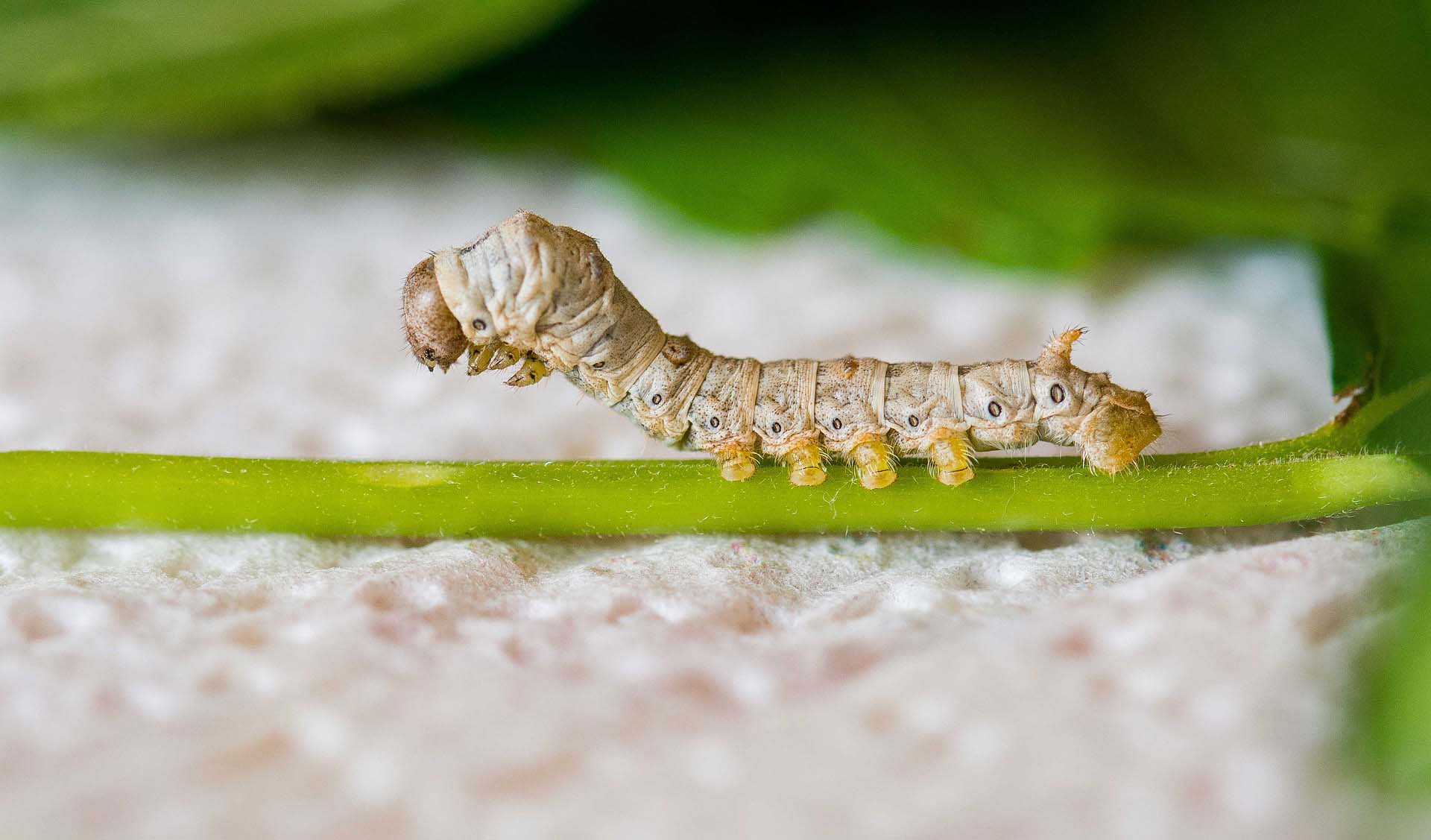 Silkworm on a green stem / Source

A definition and look at who we collect it from.

What is silk fabric made from?

Silk is a fabric woven from fibers made from the cocoons of the larvae of the silkworm Bombyx mori before becoming moths. The species are bred in captivity and rely entirely upon humans for survival. They no longer exist in nature.

Silk is a fabric woven from fibers made by insect larvae before becoming moths.

Although several species can produce this fiber, only moth caterpillars are bred for silk production. The most-used and best-known silk come from the mulberry silkworm, Bombyx mori.

Sericulture is the process of cultivating silkworms for the sole purpose of producing silk. (4)

The Lifecycle of a Silkworm

Silkworms begin their lives as an egg that hatches ten days after being laid.

The newly hatched silkworms will eat for 20-30 days, consuming many tender mulberry leaves. They'll continue to eat non-stop, eating so many leaves that they will have increased their weight over 10,000 times and molted through four skin changes.

Once fully grown, the silkworm will attach itself to a twig to begin the task of spinning a protective cocoon for protection as they develop into the chrysalis (pupa). The silkworm secretes chemicals that solidify once they react with the air to form silk. From beginning to end, this process takes around three days to complete.

After the silkworm has spun its cocoon, it will stay there for 16 days to transform. Once complete, they'll begin to excrete a brown fluid that dissolves a hole in the silk so that they can emerge. 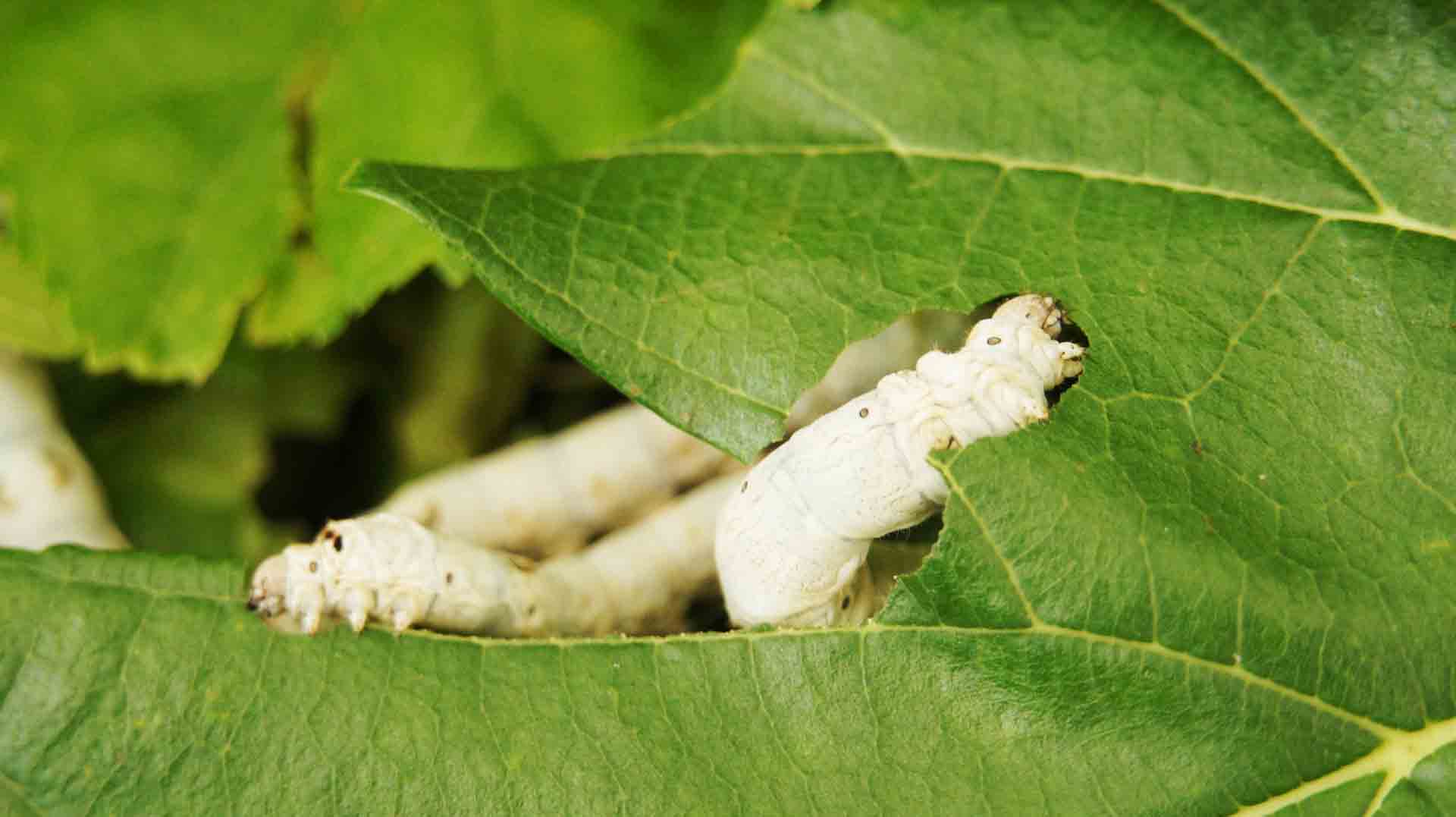 The Bleak Evolution of the Silkworm

Silkworms were first domesticated over 5,000 years ago in China.

Today, the species entirely depends upon humans for survival and no longer exists in the wild. (6)

Are you serious? Are you trying to say we should care about silkworms? That makes vegans look extreme.

Well, yes. I’m saying we should care about silkworms. Some well-intentioned people may think avoiding silk is extreme; after all, it comes from a worm. Caring for worms can seem unimportant on the larger scale of animal exploitation. But that misses the vegan point entirely. As an ethical philosophy, veganism begins with the idea that we should avoid all forms of animal use to the extent possible and practical. Since we can avoid silk, we should.

The processing of animals.

Do silkworms die in the process of making silk?

Yes. To prevent the silk filament from being broken by the moth’s emergence, silkworm cocoons undergo stifling treatments to kill the pupa inside. Treatments include sun exposure, hot steam from boiling water, or hot air for hours or even days.

The purpose of the stifling process is to kill the pupae to prevent them from emerging from the cocoon as a moth to save the cocoon filament from being broken. (7)

Stifling begins with good-size cocoons that are eight to ten days old.

Methods of stifling include:

Reeling takes place after the stifling is complete. Cocoon sorting separates defective cocoons from good ones. Only cocoons with uniform size, shape, and shell thickness go for reeling.

First, the cocoons take a hot water bath to soften the adhesion of the silk filaments to help facilitate unbinding. This cooking process enables the silk protein to unwind without breaking.

Next, a machine reels the cocoons. Either a hand-operated system or a more complex mechanical one twists several ends of the cocoon filaments into one thread with the help of a croissure. After winding, the silk ends up finally to spools.

The raw silk can then be further stretched or purified with acid or fermentation to bring out desired qualities. (8)

Is it really cruelty-free?

Is ahisma or peace silk cruelty-free?

Unfortunately, no. While it’s true that the Ahimsa silks avoid stifling, that’s only one part of the processing. The other parts still require the deaths of many moths and remain dire for the environment.

What is Peace Silk?

Peace silk, also known as Ahisma Silk, refers to silk produced without killing the silkworms. Ahisma comes from Sanskrit and translates as "non-violent" or "non-injury."

Its creation comes from Kusuma Rajaiah, a government officer from India with 40 years of experience in sericulture. Inspired by Gandhi, Rajaiah developed a way to gather silk from cocoons without killing the silkworms within. (9)

Peace silk might seem cruelty-free at first glance, but when examined closely, it isn't much better at all.

Often touted as an ethical alternative to traditional silk, peace silk avoids the process of stifling and allows the moths to climb out of the cocoon and breed. Sounds good, right? Not so fast.

Like other industries that rely on animals, silkworms must reproduce to create more silk cocoons. When breeding, farmers use male moths repeatedly until their fertility decreases. Once they are no longer needed, they find themselves thrown out of the factory and left for the local birds to eat. (10)

And don't forget, centuries of breeding for the sole purpose of silk production creates moths that live just a few days, bumbling about with large bodies and tiny, wholly inadequate wings. The unusual shape of their mouth makes it hard for them to eat. (11)

Here's how the numbers add up. One female moth lays around 200 to 1000 eggs, and most silkworms raised for Ahimsa silk have multiple breeds per season. That's a lot of offspring.

It is impossible to feed every single silk moth. Instead, many are left to die from starvation and dehydration.

So, instead of killing just one pupa per cocoon in traditional silk production, Ahimsa silk kills hundreds. (12)

3. It's Still Bad for the Environment

Silk is a biodegradable natural fabric, so it might surprise you to know that it's so resource-intensive.

First of all, producing silk uses a ton of water.

Silkworms eat ten times their weight in mulberry leaves during their lifetime. One mature tree produces enough foliage for just one hundred silkworms. Doing the math, 3,000 cocoons for one yard of silk equals a lot of trees. Thirsty trees can place strains on freshwater supplies.

Plus, several steps in the processing require large volumes of water.

Next, silk requires a lot of energy. Farms must keep controlled temperatures during processing. Harvesting and cooking cocoons use both hot air and hot water.

Keep in mind; there's no such thing as an official peace silk certification. The companies who claim to have peace silk don't receive inspections, so there's no guarantee that they follow the Ahisma process.

Research and investigations by BWC India revealed that some companies claiming to use the Ahisma label, in reality, kill their silkworms. Others didn't kill the silkworms but did kill the males used for breeding at the end of their useful life. (1)

What About Wild Silk?

You'll find varying claims on whether or not this product is vegan-friendly since it allows the animals to go through their typical lifecycle. Choosing wild silk would indeed be better for the animal, no doubt about it.

But, wearing these items still sends a message that silk clothing is not only acceptable but it's also fashionable. After all, people will have little to no clue that the item is peace silk. They will only see the thing for what it is; silk, the product of an animal.

Instead, let's work on reducing and eliminating these items from being manufactured while at the same time rejecting silk as fashion. 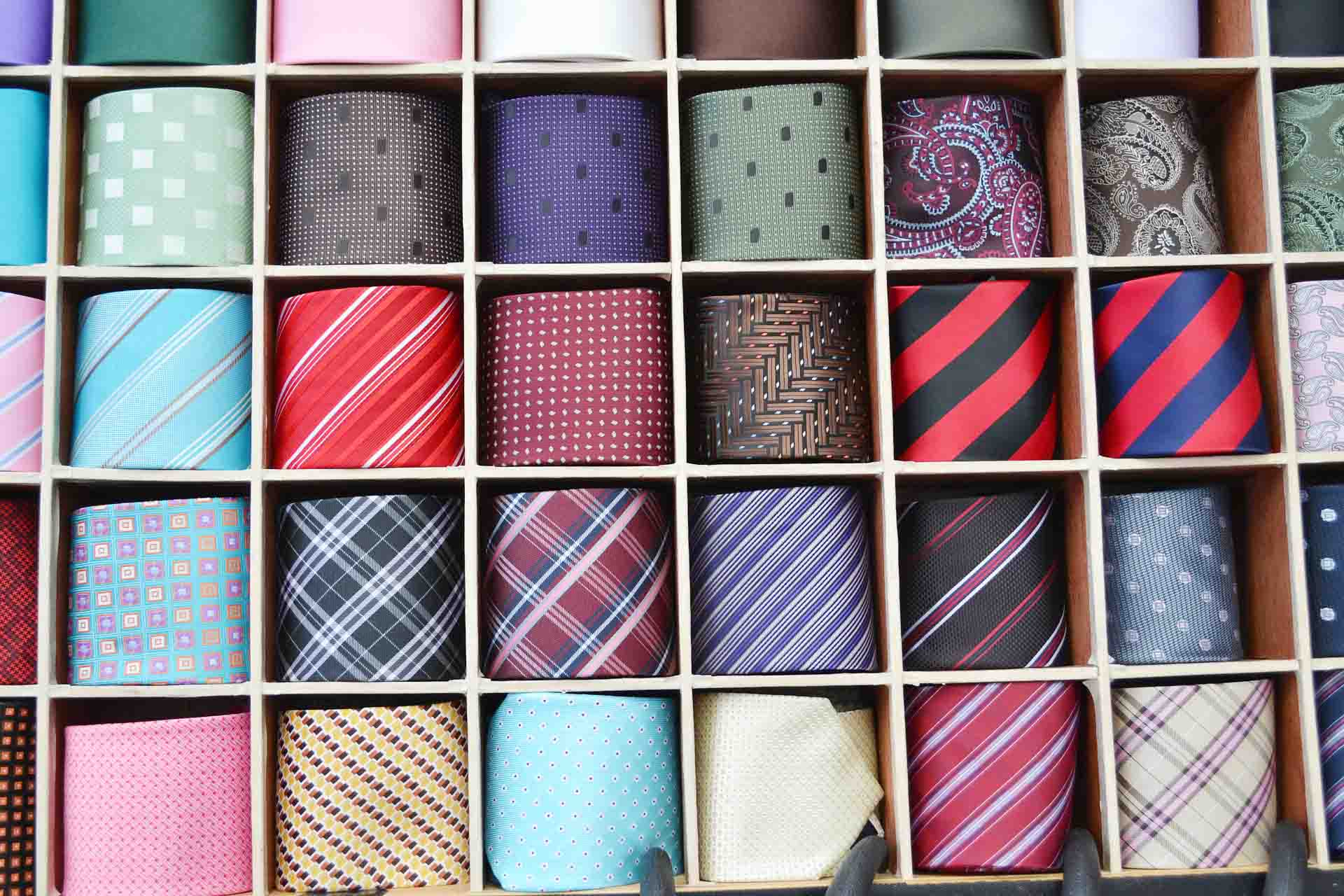 An array of silk ties / Source

Know what to look for before heading to the store.

It would be great if the labels on our clothing, bedding, and other textiles would list their animal origin, but sadly that isn’t the case. Not only are labels ambiguous in terms of animal origin, but they also use a wide variety of names to describe the textile.

This practice can confuse even the most well-informed consumer.

How is Silk Listed on Labels

Here are a few common names for silk on labels; keep in mind this is in no way a full list:

Want to know more? Find out the 50 types of silk fabrics used to make your clothes.

Note: Chiffon, Georgette, Crepe, and Satin can also be synthetic fibers, so be sure to check the label for fabric content before purchasing. If the animal origin of textile is in doubt, avoiding it in favor of plant materials may be the only option. 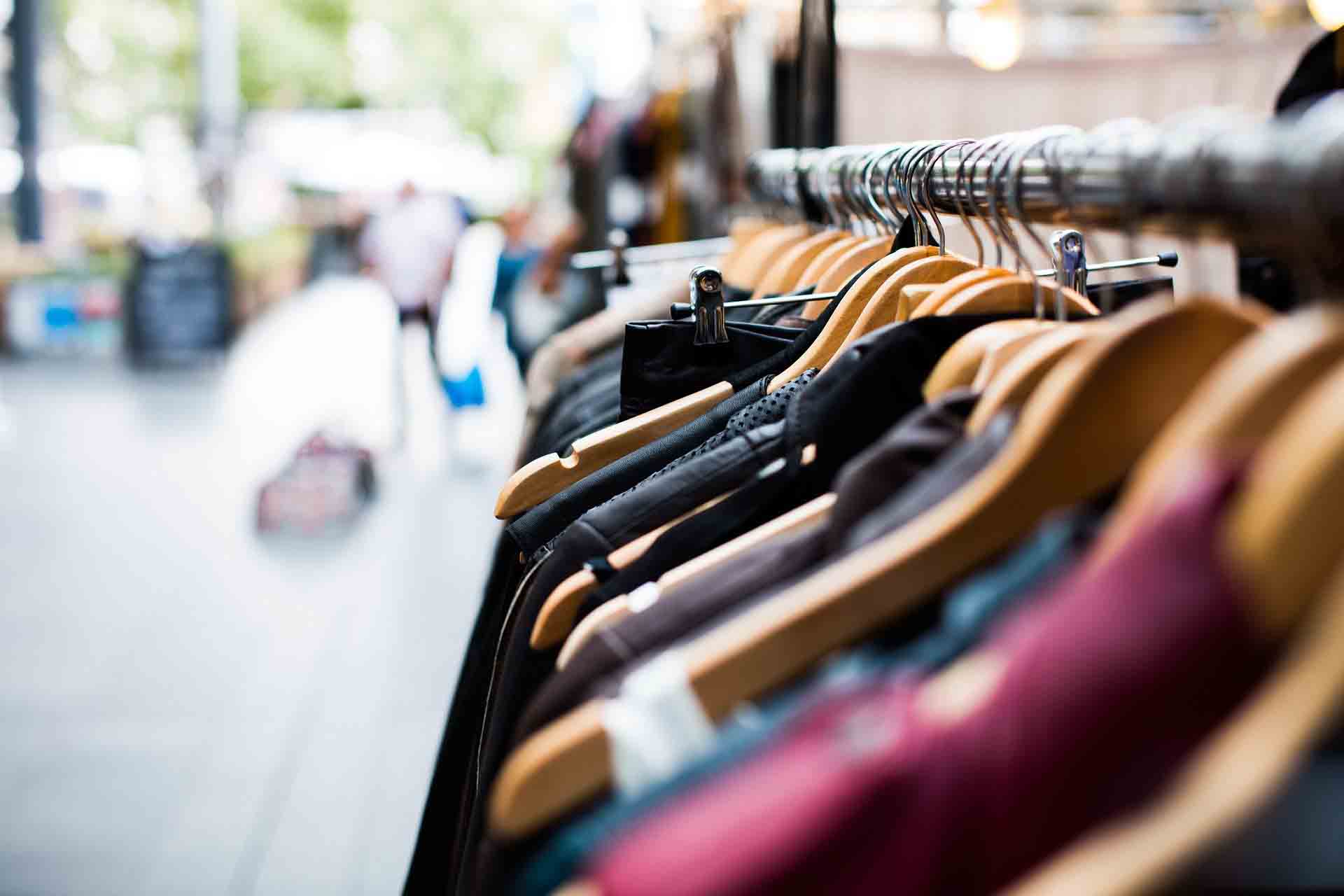 Know what to look for before heading to the store.

When replacing silk with vegan alternatives, there are more than a few options.

One common go-to silk alternative is polyester. Widely used and mass-produced, this fabric is easy-to-find and inexpensive.

But polyester comes with some environmental issues. First, it isn't biodegradable. Next, it's petroleum-based, aka a non-renewable resource. And let's not forget the microplastics that polyester sheds when they get washed.

To avoid these issues, you can choose alternatives that do not involve synthetics. 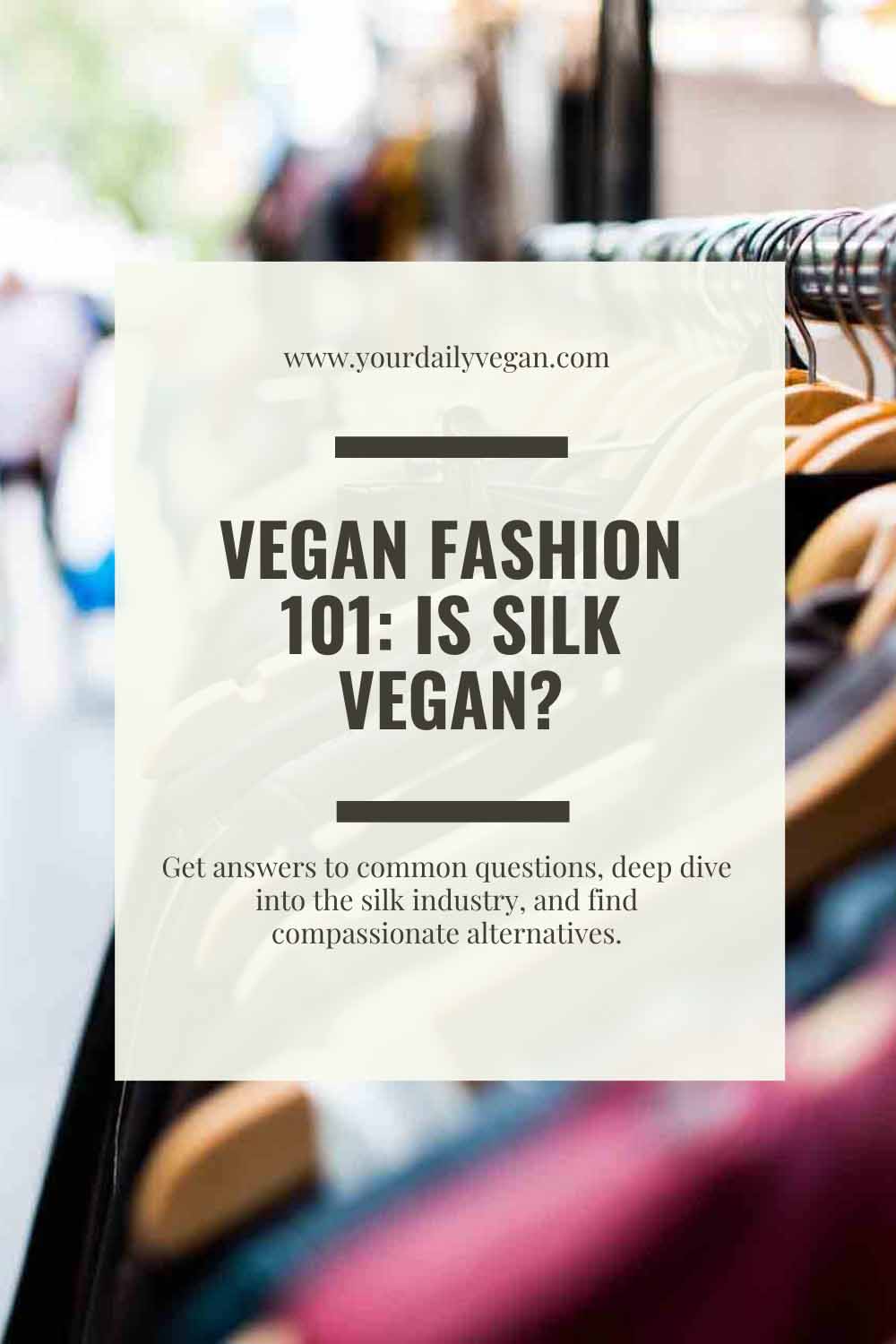