I don’t eat vegan cheese a lot, I (gasp!) don’t care for it that much.  As a non-vegan I never really cared for the dairy version either, most often leaving it off of my pizzas, sandwiches, and pasta.  As a vegan, I eat vegan cheese as a treat- and then only sparingly.  All of that said, sometimes you just need want cheesy nachos.  When I do, it’s Daiya that I’m reaching for.  Why?  It melts, it’s one of the only vegan cheeses I’ve had (that are available to me in my area) that melts.

[I am dedicating my nachos to Jenna of JenoJoon because (she’s awesome and) she’s taken on the arduous task of making nachos in all manners of happy ways for Vegan MoFo.  All that nacho talkin’ inspired me to make some!]

These are pretty basic nachos; beans, onions, tomatoes, olives, salsa, with cheese alongside a pile of homemade guacamole.  I didn’t have refried beans on hand, I made my own smokey version that turned out pretty darn good.  I cooked some red beans in a mix of vegan chicken stock and the soaking water from rehydrating a chipotle pepper until they were falling apart.  I mashed them in the saucepan until no whole beans were left.  I added diced onion and lots of minced garlic.  I cooked that for a few minutes.  I added oregano, black pepper, cumin, and smoky paprika- stirred well.  Let cook for an additional minute and then removed from heat.  I added a bit of hot sauce at the end, I like them hot.

I layered beans, olives, salsa, and cheese over my chips then tossed them in the broiler for a few minutes.  Viola! Melted vegan cheesy goodness. 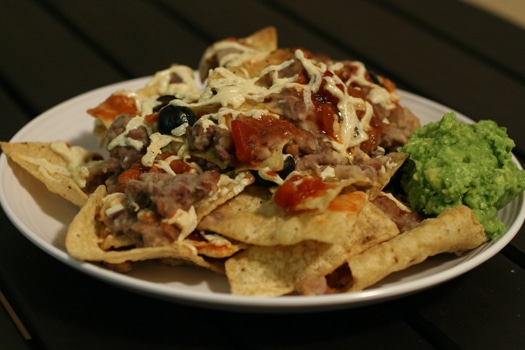 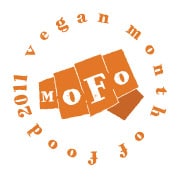