Warning: What You Don’t Know About Food Colors

Artificial food colors, they’re everywhere. Pick up virtually any food or drink item at most mainstream stores and you’d probably see, “Blah, Blah, Blah, FD&C Red No. 40, and FD&C Yellow No. 5”- or something like that. There is one place that I often run into artificial food colors that catches me off guard- vegan recipes.

Not only are these chemicals toxic, they aren’t without cruelty.  Artificial food colors are tested on animals.

Shocking, right?  I know.  I wouldn’t have immediately thought of it either, but I looked them all up to get an idea of what they are made of.  Guess what?  They’re achieved through the wonder of chemistry and the industry of oil drilling.  Certainly not something I want on my vegan cupcake, gross.

Why Do We Need Bright Yellow Sports Drinks?

Artificial colors keep the food sitting in warehouses and on grocery shelves fresh and cheery looking so that we’ll buy it thinking how good and tasty it must be.  Perhaps more insidiously, the bright blues, reds, and oranges of candy and beverages lure children with promises of tasty delight- an experience and association that persists into adulthood when it’s time to decorate cakes and cookies. If you need an example, just look at how many websites there are dedicated to cute and perfectly decorated food. There are plenty. 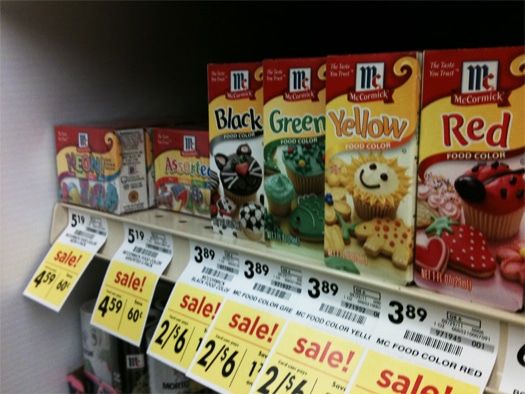 Have you ever noticed that the artificial food colors at the grocery stores always go on sale around holidays?  We are constantly bombarded with ways to incorporate these synthetic chemicals into our diets.  I’ve seen special colors for drinks, for baked goods, for ice cubes for goodness sake- all in the name of “fun.”  Food colors don’t add flavor to our food, they actually taste pretty damn bad.  So, is our fun really worth the lives of animals?

To determine the safety of these chemicals as they are used as food additives, they are tested on animals.  Of course, these tests do not indicate the substance’s effect on humans, only how much is needed to cause cancer and death in the animals they are administered to. Let’s take a closer look at what goes into getting bottles of artificial food colors to grocery store shelves.

The Seven Deadly Primary Colors are the most common colors used in the US. This by no means is an exhaustive list, there are many more that I don’t cover here. But this is a good place to start to demonstrate how awful these synthetic colors are.

The seven listed here aren’t the only ones out there.  Citrus Red 2 is approved for one use only in food- to color the peel of oranges.  That’s a pretty big vegan conundrum, if you ask me, considering that it too, is tested on animals.

So what is a vegan to do?  Use natural food colors made from fruits and vegetables found right inside your fridge!  Here is a list of colors that are chemical-free to get the perfect color you’re looking for. Here is a visual tutorial if you’ve never made homemade food dyes before.

If you would prefer to buy natural chemical-free dyes and sprinkles, no problem. India Tree has a full line of colors and sprinkles that are colored with vegetable juice and/or spices and contains no synthetic dyes. These are the sugars and colors that I use and I love them. Some people have said that they can taste the natural food used to create the colors- the green sprinkles use spinach and was the one most commonly said to taste like spinach- but I have never had that experience myself. To me, they taste like pure sugar and nothing else.

A note about India Tree products, not all of their product line is vegan. Some of the sprinkles contain beeswax so be sure to check the label prior to purchasing. Look for sprinkles made with raw sugar and carnauba wax, which is made from the leaves of the palm plant.

The India Tree Decorating Sugars Variety Set and this 3-pack of India Tree Natural Decorating Colors Set make a great starter set combo and are both vegan and free of artificial junk.

Updates to this Article

Without a doubt this article is one of the most popular articles I have ever written. It’s been shared hundreds of times and I’ve been flooded with comments and questions since it has originated. The most frequently asked question and/or comment has to do with when these colors were/are tested on animals, and if the practice continues today.

This information can be found by clicking the studies and sources that I have linked to in each example. Each one links to recent scientific data collected using animal-based studies- some as few as 1 year ago. Personally, I don’t view avoiding these toxic synthetic chemicals any differently than I do avoiding health and beauty products that are tested on animals. I know that there are some people willing to overlook animal testing because “at some point everything was tested on animals” and, “no one can avoid everything non-vegan so why should we make a big fuss over it,” but I think that misses the vegan point. There is so much we cannot avoid as vegans- things like medications, cars, or computers, for example. Since I can’t avoid everything, I avoid everything I can. Rejecting toxic synthetic chemicals disguised as food isn’t all that hard anyway.

Oh, before I forget. I use the term chemical when referring to artificial food colors. Before you start to type me an angry comment about how the entire world is made up of chemicals! Water is a chemical! Chemicals are everywhere! I know. My claim is not that all chemicals are bad- my claim is that artificial colors are toxic, unnecessary chemicals that are tested on animals. They can and should be avoided.

Got a comment or question? Ask me in the comments!


Disclosure: This guide contains Amazon affiliate links. As an Amazon Associate, I earn from qualifying purchases. See my Affiliate Policy for more details.