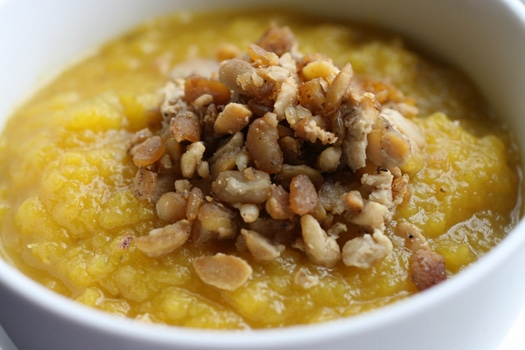 I’m not going to lie, this is the best soup I’ve ever made in my whole life.  And it was completely by accident, a delicious bowl-licking-worthy accident.

So.  I had some pumpkins that I bought for Halloween that I hadn’t carved yet (what? Like you’ve never been behind on something before?) sitting on my deck (free refrigeration).  They were just sitting there (for a month) so I decided to cook them up.  See, I’ve recently stumbled upon an insane new way to make pumpkin – it tastes like pumpkin pie and even has the same consistency (maybe a bit less dense but not by much) which is SO. DELICIOUS.  The best part?  It’s made with 2 ingredients (not counting the spices) and is super healthy.  It’s so incredibly good.

I originally planned to use the pumpkin I cooked up from the ones on the back deck for pumpkin pie pudding (which is what I call the insanely yummy new dish I make) because, well- it’s pudding. Then last night I needed to find something for dinner.  There wasn’t much in the fridge- I had half an onion, some celery, cooked pumpkin, and tempeh.  I thought it might be good to test my hand at making a coconut curry pumpkin soup (since I always have coconut milk on hand, always).  I’ve never made it before but I like curry, I’ve eaten it before so I wanted to give it a whirl.

What happened next was pure magic.  Honestly, I didn’t expect it to turn out so good.  I don’t have exact measurements but here’s loosely what I did:

Using a food processor, I pureed the pumpkin and coconut milk until creamy.  I had to do multiple batches because I have a crappy food processor- you might be able to do it in one.  Add pureed pumpkin to a large stock pot.

In an iron skillet, cook onions and celery in the olive oil until nice and brown.  Don’t skimp on this, you want them to taste all roasty and toasty.  Once fully cooked, add to food processor with a little bit of the vegetable stock and process until mostly smooth.  Add to soup along with the rest of the broth.  Stir until fully combined.

As far as the spices goes, here’s where it gets dicey- I don’t measure.  I used about a teaspoon of turmeric, a couple of teaspoons of powdered garlic, and about a tablespoon of ground cumin.  I also used fresh cracked pepper and no salt.  The bouillon adds enough salt for me, you may need to salt your batch depending on the stock you use.  Once you have the herbs mixed in, heat the soup on medium low until warm.

I topped my soup with toasted tempeh.  It was the perfect accompaniment to the soup and offered (protein) a bit of substance to make it more of a meal.  I took 8 oz of tempeh and boiled it for 20 minutes.  Once boiled, I drained it and broke it into small crumbles which I tossed in an iron skillet of heated olive oil.  As the tempeh was cooking I added fresh cracked pepper and Liquid Braggs (you could use soy sauce if that is all you have).

Once done, grab yourself a warm bowl of savory goodness and top with the toasted tempeh.  Yum.

And if you have any leftovers