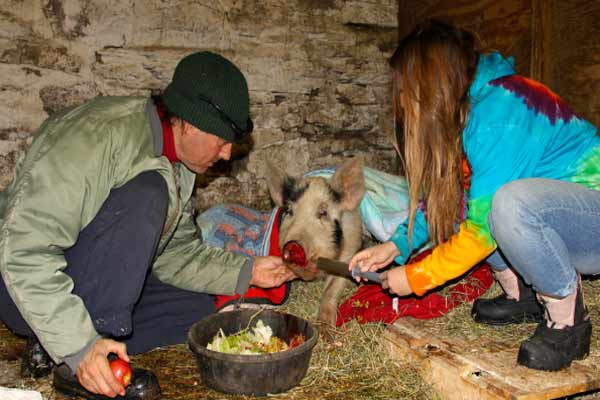 The emaciated little pig struggled to breathe as blood poured from his snout, and yet his eyes were filled with hope. Under filth-encrusted sores and protruding bones, he glowed with such sweet purity that I had to turn away, my heart seared.

On the night of Thursday, February 20, an extremely sick pig found his way to Indraloka Sanctuary, located in Mehoopany, Pennsylvania. He arrived covered in filth and sores, with ulcers on his feet, blood pouring from his snout, and protruding bones. He had muscle atrophy. He had a severe case of pneumonia. He was anemic. He struggled to breathe.

He was rescued by a humane police officer, who responded to a concerned call from a citizen who had noticed that their neighbor had left two pigs to sit in their backyard throughout the winter. In snowy conditions and weather that sometimes reached sub-zero, the two starving pigs would sit tightly next to each other against the raging elements to try and stay warm and alive.

These two pigs were there to be raised as “backyard meat.”

One pig was surrendered and brought to Indraloka, while the other was found dead. And although vets had warned the sanctuary that this pig may not survive, they stood by his side and fought for his survival as he fought himself. They named him Jeremiah, which means “God will lift him up.”

That first night, the sanctuary owners gave him fresh water, which he drank with a desperate thirst. They lay with him all night as they placed him in a warm bed of hay with pillows and blankets. His body told everything about his past, but despite that past he allowed them to care for him. My own words cannot clearly describe this heartbreaking scenario as well as the first person narrative found on the sanctuary blog, written by founder Indra Lahiri:

The last several days have been a blur of vet visits, medicines, feeding his broken body by hand and even by syringe when necessary, and prayers for his survival. Long-term pneumonia left his airways so scarred that blood and mucus spewed from his nose as he battled for air. Painful ulcers on his feet and legs from being forced to live in his own filth caused his legs to swell unnaturally.

And yet, throughout all of it, his eyes held mine kindly and steadily. Jeremiah’s purity remained wrenching in its deep sweetness even as he fought for his life.

As of today, Jeremiah’s health is miles beyond what it was the night of February 20th. His pneumonia is gone, he vocalizes happily with the caretakers of Indraloka. He can now walk despite predictions that he would not, just two and a half weeks after he arrived at the sanctuary. Through the long nights of suffering and pain, the days are now new and full of potential. Indraloka lifted him up, and Jeremiah himself had the will to fight, and he won.

If you’re interested in following Jeremiah’s story further, you can follow Indraloka Sanctuary on Facebook, or visit their website. You can also help out by volunteering or donating to their current fundraiser for Jeremiah.

Do you own or operate an animal sanctuary?  Let us help raise awareness with you. Find out more.