Goodbye to the Queen

The sun rarely shines in the winter in Ohio but it was shining the morning of December 31, 2014, the eve of a new year. I appreciated the sun and the warmth it provided as I helped to bury Gypsy who had passed the night before- assisted, after a three year battle with renal failure and a stroke. As I stood shivering in the thirty degree weather watching dirt hit the top of the box that Gypsy would be buried in, I thought about her life.

Gypsy was the first rescue kitty I ever took in way back in November of 2000. I was living with my girlfriend and two cats already- Kitten and Lakini. We had just arrived home from Thanksgiving dinner with my parents when we heard a cat outside our front porch. This cat wasn’t simply meowing, he/she was screaming as if in pain. Opening the front porch that night we found Gypsy, staring inside with a look like, “Finally, it’s about time.”

She walked up onto the porch with no encouragement at all and made herself at home, hollering all the while. I didn’t know it then, but Gypsy would continue to “talk” like this for the rest of her life- usually in the middle of the night when you’re trying to sleep. Gypsy wasn’t a cuddle cat but that didn’t stop me from making a makeshift bed out of blankets on the floor to sleep with her that first week, and the one after that if I’m honest.

From the get-go Gypsy let everyone know that she was the boss. She became instant rivals with Kitten, the established alpha cat of the house. Uncannily similar in appearance and temperament, these two would squabble the rest of their lives. When Kitten surrendered to cancer at age 10, Lakini assumed the new rival position.

As anyone who rescues cats know, once you take in one cat it somehow opens the door for five or six more. Shortly after Gypsy arrived, Dezzi showed up. Jahnni came, and just a few months later Stella Belle, Scowt, and Loki arrived. Now, years later, came Tully- pregnant, eventually giving birth to three kittens of her own. Rescue after rescue, kittens and cats alike, Gypsy made sure to let each one know who was in charge earning her the well-deserved nickname, Gypsy Queen. No one messed with the Queen.

Gypsy was a gorgeous cat, of that there is no doubt. But much like a thorn on a rose, Gypsy would make you bleed if you touched her without an invitation from her first. A social cat, Gypsy would come to visit with guests- rubbing up against them invitingly. The unwitting guest bends down to pet the beautiful, and seemingly friendly, soft grey kitty with the silky fur- and this is where it went wrong. Petting Gypsy for 1.2 seconds, on her back, on her tail, on her bum, or on her ears always resulted in injury. She was cute and fast, you never saw it coming. One second you are petting a purring kitty, the next you are screaming looking at the pooling blood on your fingers wondering what the hell happened. That was Gypsy.

Some might wonder why I didn’t try to find Gypsy another home, after all she didn’t really get along with any of the other cats. Gypsy wasn’t what you would call laid-back cat. Don’t get me wrong, there were sweet moments- all kitties have them, but Gypsy was almost always kicking ass somewhere. And I did initially try to find her another home, but finding one proved really difficult. Generally speaking, young animals tend to fare better in our human world where youth and phyical beauty is not only desired, it is abundantly rewarded. Finding a home for a stray cat is always a challenge in and of itself, but finding a home for an older cat with an attitude problem can be impossible. Gypsy was 6-8 years old at that time, no one wanted her. So I gave her a home.  I accepted her for who she was, quirks and all, and she did the same for me. She was family.

I watched as the remaining dirt was shoveled on top of her grave, my tears cold upon my cheeks. I thought about how much I was going to miss Queen. Later I would think about her last moments and my part in ending her suffering, and how absurd it is that I have the power to end a life. I would let myself feel a few brief moments of anger at the whole that is human domination. I would convince myself I did the right thing, if taking a life can ever be the right thing. I would think and rethink every moment from the time I met Gypsy to the time she died, examining each memory to ensure that I gave her as happy of a life as I could, that she was cared for- that she had the proper healthcare for her illnesses. The what ifs and could haves would plague me for days, ensuring that I don’t sleep well.

I would think all of that later. Right then, with the left over fall leaves settled over the freshly dug ground, all I thought about was Gypsy resting now in her favorite place in the yard. She was a spitfire, a handful- a mischievous minx who did what she wanted, when she wanted, and how she wanted to do it. She kicked ass and took names. She was sassy, soft, and sweet (sometimes). She was the queen and I loved her. 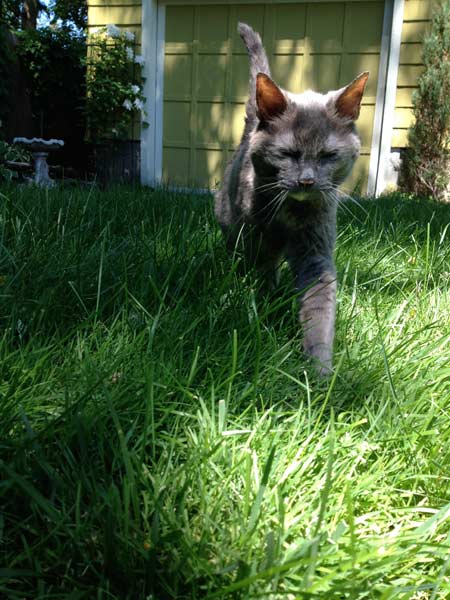