I am always on the lookout for farm sanctuaries in my area, and over the summer I was thrilled to find one only an hour and a half away from me in the beautiful area of Kent – F.R.I.E.N.D Farmed Animal Rescue. There aren’t a great number of farm sanctuaries in England, which makes F.R.I.E.N.D extra important in providing a place of residence for rescued farm animals, and spreading the vegan message.

Started in the early 90s, F.R.I.E.N.D is run by Marion and Mark Eaton, who have devoted their life’s work to caring for rescued farm and domestic animals and promoting a vegan lifestyle. Upon entering the sanctuary, I was immediately greeted by Tommy, the sanctuary’s devoted dog and tour guide, but Mark was on hand to show me round as well.

The first thing that surprised me about the sanctuary was how the animals were happily roaming free together; there were no designated areas for specific animals. Mark explained that F.R.I.E.N.D was a happy family, and the animals prefer to be kept all together.

“The animals get on really well with each other. Sure they have the odd squabbles just as people do, but overall its a very happy community.”

The first area I saw hosted a group of turkeys that were overseeing the day’s activities, ducks, a couple of pigs and the farm cat. These animals have all come from different backgrounds; some were unwanted pets, but the vast majority have come from factory farms. All the animals were unique and beautiful, but my attention was drawn to one turkey in particular, and specifically to her beak. Mark explained that this is the result of debeaking on factory farms.

“Chickens and turkeys are often de-beaked on the factory farms to stop them pecking at others. It involves a lot of suffering, but as they are kept in such close proximities, it’s seen as the only solution.”

Debeaking is usually accomplished by slicing off part of the beak with a hot blade, shortly after the chicks have hatched. It is a painful and sometimes fatal procedure. (1) 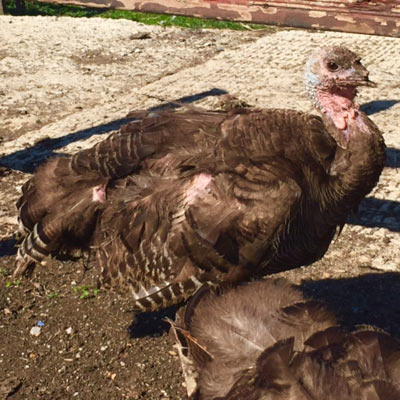 Holly (who I later had the privilege of naming, in remembrance of turkeys that are bred for Christmas) had been through this hellish procedure and was one of the worst cases Mark had seen. She seems happy and content today, although she would have endured a very different fate had she not been rescued.

Next, I visited an area that could accurately be described as a pig’s paradise. Indulging themselves in a mud bath to cool down were two types of pigs: younger farm pigs that were around six months old and, although a fair size now, would grow to be much larger, and those that were previously micro pigs. Micro pigs have been very popular over the last few years.

“The micro pig phase meant for a lot of unwanted pigs. Many people didn’t realise they wouldn’t be ‘micro’ size forever.”

Presuming that these were the only pigs living here, I was shocked to see another area with even more of them! These were larger, older pigs, with a couple of micro pigs in between. By this point, I realised that I may have slightly underestimated F.R.I.E.N.D, having expected a small sanctuary caring for a handful of animals. I was surprised to be making my way over to even more land, comprising a group of very content cows basking in the sunshine. These cows had been rescued from the dairy industry, a cruel industry that involves so much suffering to mother cows and their babies, that many people are blissfully unaware of. 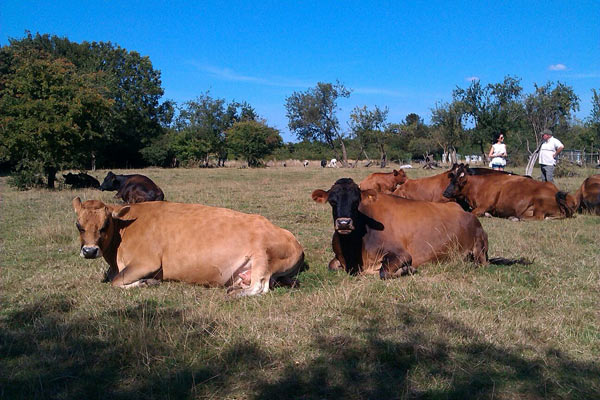 A cow’s natural lifespan is about 20 years, but cows used by the dairy industry are typically killed after about five years because their bodies wear out from constantly being pregnant or lactating.

RELATED READING: The Dairy Industry: Misery for Mothers & Their Babies

On average, F.R.I.E.N.D has around 150 animals, and caring for these is a 24/7 vocation. I wondered if it ever got too much for Mark and Marion to handle.

“We have a few volunteers that come and help out. Groups such as London Vegan Meetup volunteer every month which is a big help. But to be honest, with just my wife and I most of the time, it is a lot of work. We rely solely on public donations which go to help pay for feed, essential equipment and veterinary bills and are always looking for new ideas to incorporate into the sanctuary, or events we can hold; we held our first music festival this year. F.R.I.E.N.D’s number one priority is caring for the animals, whilst at the same time promoting a vegan lifestyle. After all, if everybody were vegan, there would be no need for these sanctuaries in the first place.”

The final stop was helping with feeding time for the pigs; boxes upon boxes of fresh vegetables were distributed to the hungry pigs, who were very grateful. However, I started to wonder, are public donations enough? Mark then explained that this is the most common question he is asked: how does he do it? At which point he put both hands together and looked up towards the sky – he prays. 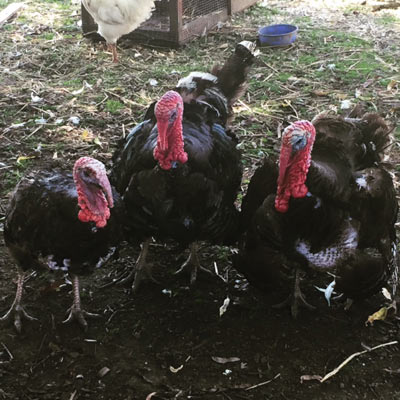 Places such as F.R.I.E.N.D are so important in enabling people to see farm animals as individuals that have a zest for life, just like humans. For all the people around the world that are working to improve the lives of farm animals, Mark and Marion are amongst the farm sanctuary owners on the front line, actually taking in victims of the factory farming industry and doing the best they can for them. Rescuing the number of farm animals that F.R.I.E.N.D has is not an easy task, but it is clear to see that their passion for promoting veganism and caring for the animals, the ambassadors for other farm animals around the world, far outweighs anything else. I am proud that F.R.I.E.N.D is on hand to take in animals in England that are in need of love and care, and hope that more people support the sanctuary and make a connection with its delightful residents.

F.R.I.E.N.D will also be at the Animal Aid Christmas Without Cruelty Fayre in London.