This week’s sanctuary spotlight features a sanctuary that is very close to my heart: Farm Sanctuary in Southern California. In March 2015, I packed my bags and embarked on a trip I had been planning ever since I first watched The O.C. But surprisingly enough, it wasn’t the sandy beaches, glorious weather, and endless shopping I was most excited about – although these were definitely a bonus – it was visiting Farm Sanctuary. After learning so much about this sanctuary, I wanted to experience it for myself and find out how it has inspired so many people to take up a vegan diet, open a farm sanctuary of their own, or just to take time to think about the lives that the majority of farm animals are subjected to today. 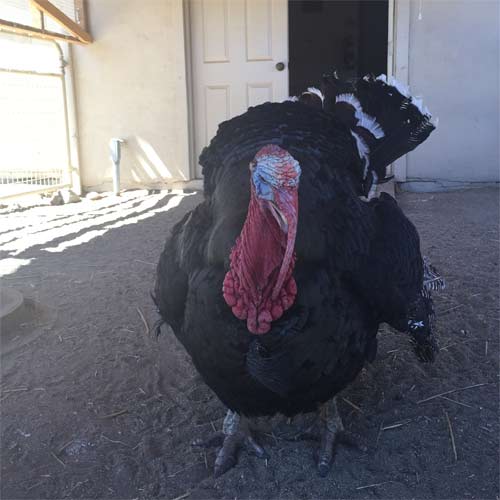 More than a Sanctuary

Many of you will be well aware of Farm Sanctuary and the incredible job they do. But in case you are unfamiliar, Farm Sanctuary was founded in 1986 by Gene Baur and Lorri Houston, and is the nation’s largest farm animal rescue and protection organisation. They are driven by their inspiring mission, “To protect farm animals from cruelty, inspire change in the way society views and treats farm animals, and promote compassionate vegan living.”

You may also know that Farm Sanctuary is so much more than just a sanctuary. They are constantly expanding and coming up with new ways to convey their important message, with co-founder Gene Baur appearing on such mainstream television shows such as The Daily Show with Jon Stewart, extending their already long list of high-profile supporters and releasing hugely successful books including the latest, Living the Farm Sanctuary Life. The rescued animals live happily at their sanctuaries in Watkins Glen, New York, Northern California, and in Acton, near Los Angeles. I visited the latter, which is the smallest of the sanctuaries.

Education is paramount to Farm Sanctuary’s aims and motives. They believe that if people take the time to get to know the animals residing there, they will see that they each have their own unique personalities and feel a broad spectrum of emotions, just like humans. For this reason, Farm Sanctuary holds regular tours around the sanctuary so you can not only meet the animals, but learn about the inspiring journeys that led them there.

On a typically hot and sunny Sunday in the heart of California, volunteer Kelly led us, a group of intrigued visitors, around the sanctuary. First I met the pigs, who were just waking up from a nap session. I was completely taken aback by how huge these animals were, and all of a sudden I had a scary realisation. I love pigs, yet I had never actually been close enough to touch one before, and had only ever seen one at a sanctuary in England miles away from where I live. I realised how strange it is that the products that come from a pig (sausages, bacon, etc.) are literally everywhere but, in England at least, there are no pigs. Of course, they are there somewhere, but are hidden far away from sight, so to get up close and personal to give these huge pigs a belly rub was a pretty surreal moment for me. Their mannerisms really reminded me of a famous quote by Winston Churchill about his love for pigs: “I am fond of pigs. Dogs look up to us. Cats look down on us. Pigs treat us as equals.”

The pigs here were not competing for my affection, but were still quite content for me to be there. In stark contrast to these peaceful animals, I was shown a cage the size that a pregnant sow on a factory farm would be living in. Kelly explained that this would be the reality for the majority of mother pigs, with no room to walk or even turn around properly. This surprised and shocked several of the visitors. 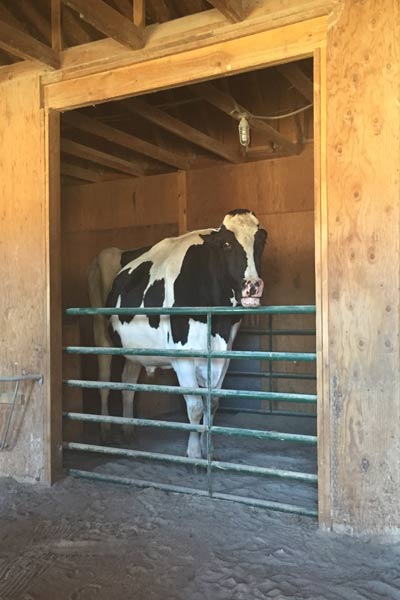 Next we moved onto the cows, and at this point I began to notice a pattern: again, the animals were so gigantic! Kelly then explained that to keep up with consumer demand, the animals would have been raised using growth additives on the factory farms. Because they are seen as nothing more than a commodity, it is more efficient to produce larger cows, so that more meat is produced. At this point, I really began to think about something that Kelly mentioned at the beginning of the tour: the animals living at Farm Sanctuary are ambassadors for their kind. Although the number of animals there are only the tiniest percentage of farm animals alive today, they represent all those cows, pigs, chickens, etc. that are suffering in cramped, horrific factory farms. At Farm Sanctuary, they aren’t seen as simply another commodity, and although meant for the food industry, they are thriving in their well-deserved freedom. 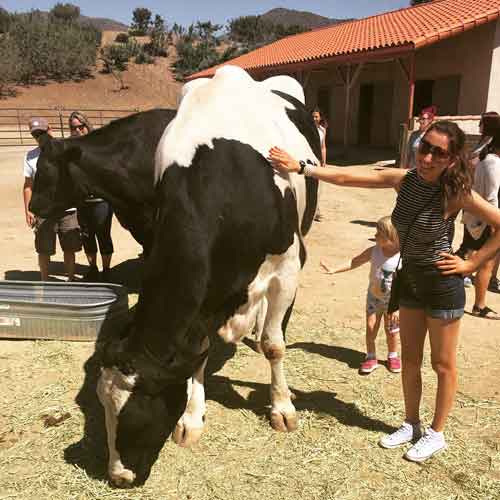 Pinto, a male cow, was going to be used for veal. It was so inspiring to see him having grown to such a phenomenal size, when he was originally only meant to live to 16-20 weeks old. Like many others on the tour, I took a moment to think about how all the animals here were destined for very different things. 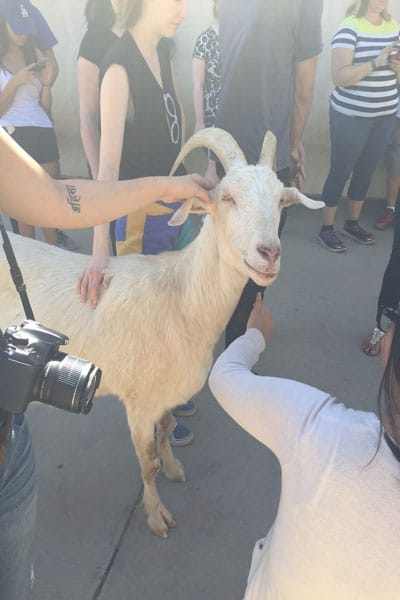 Our last stop was to spend time with the incredibly cheerful goats. They seemed to be the crowd pleasers and were overjoyed with all the attention they were receiving. To me, they summed up my overall feeling towards Farm Sanctuary. The fact that these animals are free to not only survive, but thrive at the sanctuary stresses how they are capable of living so differently to the suffering they are reduced to on factory farms. 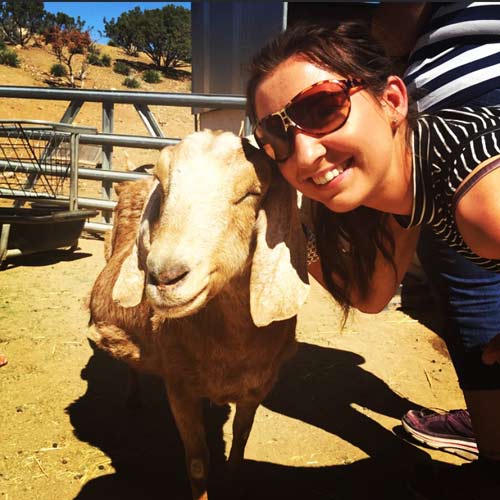 My Your Daily Vegan profile photo is with one of these happy goats from this very Farm Sanctuary visit!

And here began my belief in farm sanctuaries. Witnessing the reaction of the people around me, I left this magical place feeling hopeful that such sanctuaries dohave the power to spark change, armed simply with education and some adorable animals. Farm Sanctuary has accomplished so much in the time it has been open, and I know that  they and all the other sanctuaries around the world are making an impact. I am so happy that I got to visit, and little did I know it would spark my determination to visit any many farm sanctuaries as I can! I would strongly recommend a visit to any of the three sanctuaries, for vegans and non-vegans alike. At a time where the suffering of animals happening around us seems hard to avoid, we must remember that there is hope. Farm Sanctuary has played a huge part in creating this hope.

Upcoming Event:  Celebration For The Turkeys, taking place at different locations throughout November.

Tours:  Tours take place throughout the year at the different sanctuaries. Contact the sanctuary for individual visits.