Last week Susan Voisin over at Fat Free Vegan Kitchen posted a recipe for Fat-Free Onion Cream from something she caught over at Food52 by ChefSteps. Basically, it’s roasted onions pureed into a cream with a bit of lemon and salt in it. Susan mentioned it would make an excellent base for all manners of things, and I couldn’t agree more!

My brain started thinking about what I could try.

I mentioned on Twitter the other day that me and my wife are reducing the amount of oil that we eat. I don’t mean that we restrict all fat; we still consume avocados, olives, and nuts, just in much smaller amounts than we had previously.

While there are a lot of reasons that we made this decision, it largely has to do with this article, Why I’ve Finally Stopped Eating Oil, on No Meat Athlete.

[I’m not a dietitian, and I don’t play one on the internet, so don’t take what I’m saying as medical advice.]

Cooking without oil is not something that I am familiar with doing. People often say that they had to re-teach themselves how to prepare meals once they moved to a vegan diet, and I feel the same way about using oil.

Instead of using a bit of olive oil in the skillet to sauté my vegetables, I’m using water. I’m roasting in rich vegetable broths, and things seem to be okay. I’m not saying I’ll never roast carrots in a bit of oil again, but for the most part, I won’t.

I’m using more spices than I had previously, and I’m getting more creative in the recipes that I’m concocting. 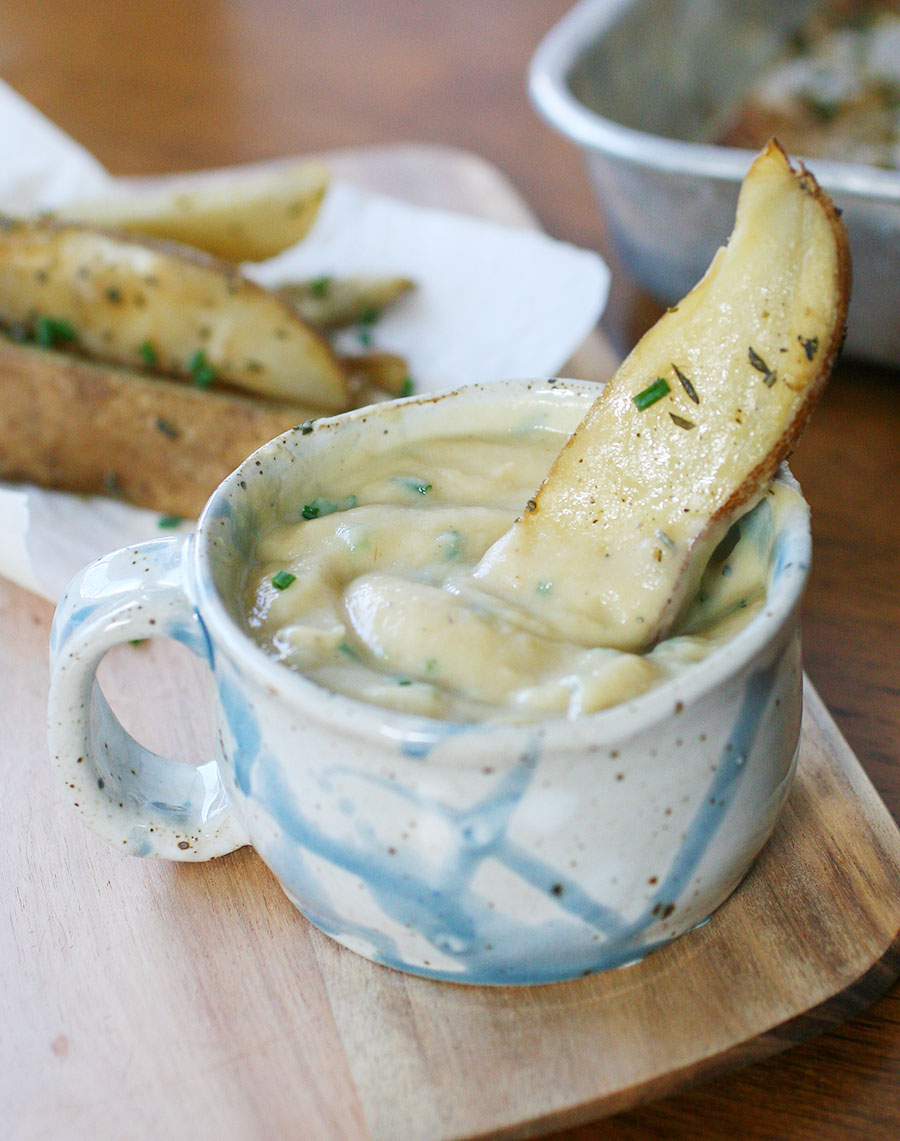 The trick to getting a rich, thick cream is roasting and pureeing the cauliflower. It’s quite unbelievable in its silkiness and makes a great neutral base for other sauces.

I took the cauliflower cream and blended it with a batch of the onion cream until dreamy. Then, I blended in some lemon juice and a bit of salt.

Add some fresh chives and viola!

A thick sour cream perfect for dipping roasted potatoes or dropping on top of a perfectly baked potato. 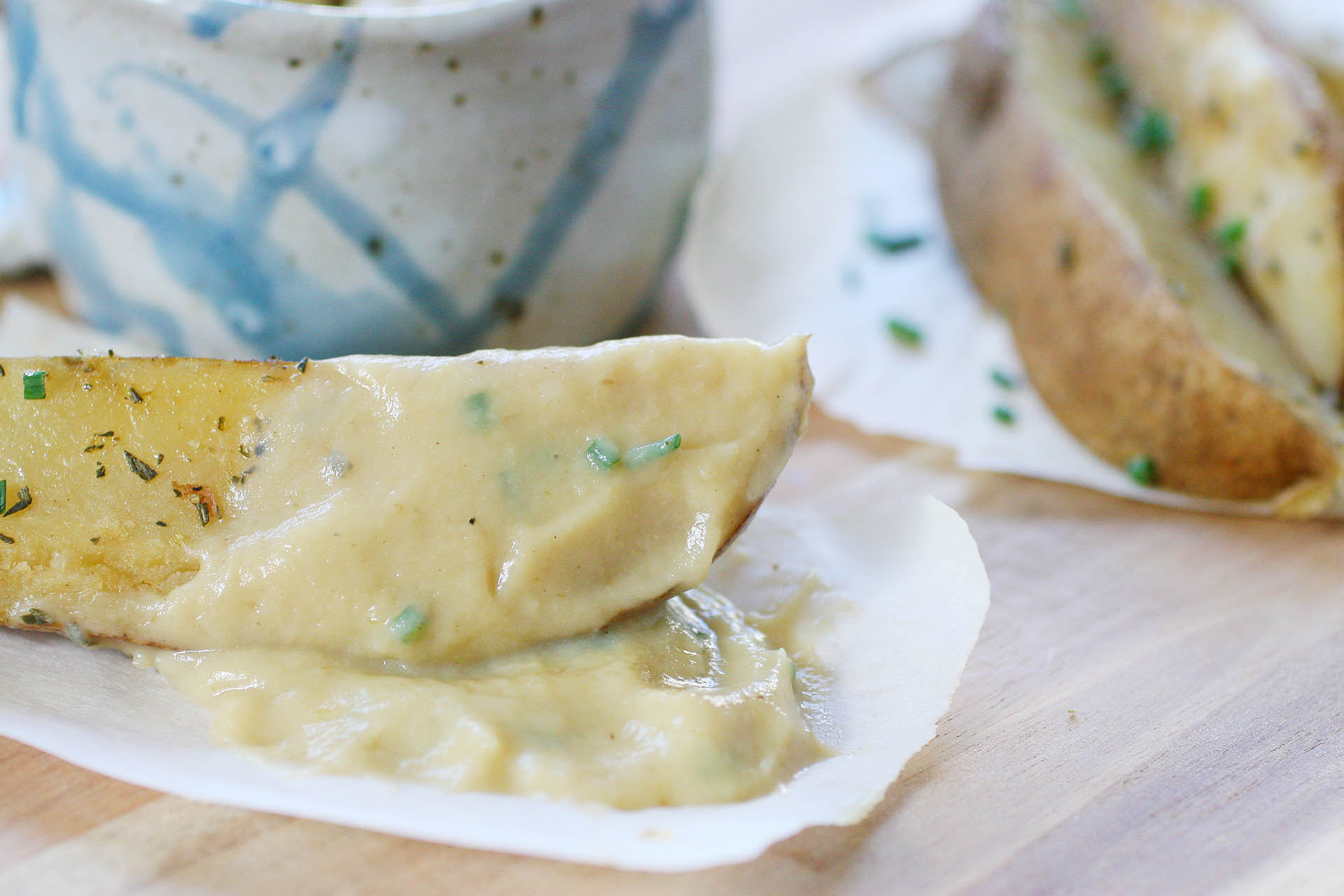 One quick note about this cauliflower cream: It is not bright-white like a dairy-based cream. Instead, it’s off-white. If you prefer a whiter cream, try using steamed cauliflower rather than roasted.

Doing this will make the cream less thick because the steamed cauliflower retains more water than roasted, but it might create a brighter cream. If you do decide to steam cook the cauliflower rather than roasting it, omit the water during blending.

This cream has the same tart flavor you’d expect from dairy-based sour cream. You can adjust the tartness by adjusting the amount of lemon juice. I like tart foods, so the lemon juice levels in this recipe reflect that. Adjust the recipe to reflect your taste.

When I told my wife that I was making sour cream out of cauliflower, she was skeptical. She was skeptical when I talked about the onion cream. Her skepticism remained as I measured lemon and salt into the blender.

Even as I put the plate of fresh, hot roasted potatoes alongside a bowl of cold, creamy cauliflower cream in front of her, she was skeptical. But then she took a bite and was a skeptic no more.

This vegan cauliflower cream was good on roasted potatoes, but I can imagine it on any fried or baked potato. I mentioned it earlier, but I’d love to try this as a pasta sauce by changing it up with some garlic powder, basil, and black pepper.

This cream would work well as a stroganoff or pot pie gravy. The possibilities are limitless.

This cream is gluten-free and oil-free, of course.

If you make this sauce or a version of it, let me know. I’d love to hear about your creations!