The New York American Museum of Natural History unveiled a never before seen tapestry and it’s a pretty big deal.  What makes the 11-by-4-foot tapestry so special?  It’s made completely out of spider silk.

This cruel tapestry took four years to make, and apparently there’s no other like it in the world.  The tapestry is gold because that’s the natural color of the golden orb-weaving spider, the spiders who spun the piece.

It was Simon Peers who conceived the project.  But he wasn’t the first.  A French missionary dreamed up the idea over a century ago, but failed at attempts to make it work.  Peers teamed up with fashion guy, Nicholas Godley, to design the tapestry.  The two then went out and found local weavers to help, well, weave.  Godley says, “They did think we were insane.  It was actually hard to find people who were willing to collect and work with spiders. I think most people are arachnophobes. I mean, I am, and they bite.”

I mean, wow.  How superfluous- to exploit a million little animals for a project simply because, “it’s never been done before.”

I suppose that most people don’t really consider spiders as animals because of their small size and icky nature.  But did you know that spiders have a central nervous system?  That they care for their young, sharing food and carrying them around on their backs?  They are social, building communal webs that could house anywhere from a few spiders to 50,000 individuals.  And even though that sounds totally creeptastic to me, it also appears that spiders are sentient.  That means that they have a right to life and we should respect them.

I don’t kill the spiders at my house.  If they become problematic, I remove them by scooping them into a cup and placing them outside.  But for the most part, the spiders don’t want anything to do with me.  They would prefer it, thank you very much, if I left them alone.  So I do.  In fact, they rid my house of other unwanted creepy crawly things.  It’s almost as if I’m getting nature’s exterminators for free.  Sweet deal, really.

So these incredible beings are silked with a small machine.  But get this, the machine was designed centuries ago when the first attemps to silk spiders were made.  So we are using a machine that is centuries years old, to hold the spider down, and we believe that it doesn’t harm the animal?

“A very careful person simply pulls the thread out of each spider and wraps it on a spindle.”  A very careful person.  Weavers, whose skill is weaving.  Surgically extracting silk from an animal a mere four inches long with a massive and complex sensory system, one cannot be careful enough.  After they’re “silked,” they are released “back into nature,” unharmed, of course.  And how do Peers and Godley know the animals are unharmed?  Well, Peers is a “textile maker,” and Godley is a “fashion expert.”  Who could better understand the emotional and physical well-being of a wild animal than people who work with clothing?  We all know the track record regarding treatment of animals in the clothing industry.  The human variety has been abused for years slaving for poor wages in deplorable conditions to make high fashion clothes.  Furry animals have been skinned alive for their contributions.

Godley says, “The spiders are harnessed … held down in a delicate way…so you need people to do this who are very tactile so the spiders are not harmed.”  Spiders are wired for extreme sensory perception.  I think holding one down “delicately” to extract their silk is akin to holding down a human animal with a backhoe and extracting some fluid from them with a shop-vac.

Peers says, “It’s called dragline silk…A spider can produce up to seven different types of silk.  The dragline is what frames the web; it’s the thicker silk on the outside. Also, it’s extremely strong. The first panel that we wove, we were quite stunned by the fact that it sounded a bit like guitar strings, pinging like metallic guitar strings. I mean, it is a very, very unusual material.” 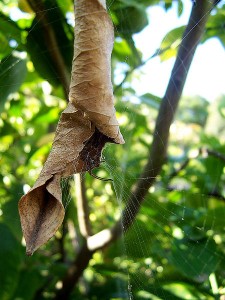 Hey Peers, it’s not “material.”  To the spider, it’s an integral part of it’s life.  It’s a home, it’s a means to catch prey (aka FOOD), and it’s a womb.  The spiders cannot live without it.

The rest of how the tapestry was made, just left me shaking my head.  The author is consistent with the use of the term, “a very careful person,” when describing the weaves.  Does it make it any better that they were careful?

A better question is, “Does it make it hurt any less, is it less invasive to the animal?”

The article says, “A very careful person simply pulls the thread out of each spider and wraps it on a spindle. It’s then put on a hand loom and woven.  The main threads consist of 96 twisted silk lines. The brocaded patterns in the tapestry — stylized birds and flowers — are woven with threads made up of 960 spider silk lines.  Peers says they never broke a single strand, yet the tapestry is as soft as cashmere.”

Yes well, at least the thing is soft, right?

Peers and Godley say they spent a half-million dollars of their own money to make the tapestry.  Who’s money did they want to use?  They spent $500,000 of their own money to exploit another living, feeling animal.  How can people continue to support the exploitation of any animal (saying the tapestry is “amazing” and “an extraordinary accomplishment”), and all the while fighting to protect others?  Exploitation is exploitation, regardless of species.

Then think of all the wonderful (and necessary) things that the $500,000 could have done.  Feed starving human animals, provide homes for thousands of unwanted non-human animals, medical care for abused humans and non-humans……

Find out more about how amazing spiders really are by clicking on the Wikipedia Spider page.