Lifespan of flies is longer than calves 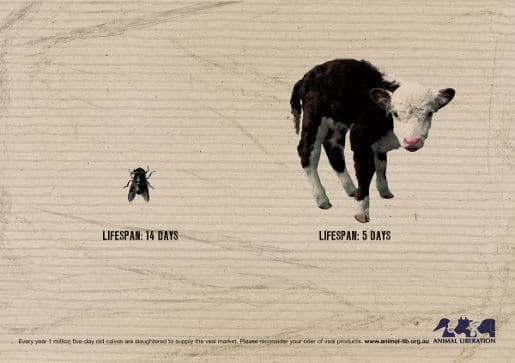 “Every year 1 million five-day old calves are slaughtered to supply the veal market.”

This is a 2008 ad by Animal Liberation in Australia that I found pretty dramatic.  Did you know that the veal industry is a result of the dairy industry? Well, like other mammals, a cow will only produce milk once she’s given birth.  Makes sense, nature has a nasty habit of doing things completely right without the need for human intervention.  But we couldn’t exploit the cows if we just let them produce milk in natural cycles, so we impregnate them (over and over again, in unnatural cycles) to keep them producing milk- for their babies, which we take away from her (we wouldn’t want all that milk going to just her baby and not a large corporate grocery store now would we?) and if we can’t use the cows (meaning if they aren’t girls who can start the cycle over again), we chain them into a veal crate so that they can’t move (hey, no one likes tough veal).  Then, we finally kill the calf.

Meanwhile the mother of the calf cries and searches for her lost young.  Just like a human would if a human lost her child.

Do I sound bitter?  Yeah, probably.  I’m heartbroken for those poor mothers and children.  No, they may not be the human variety, but that doesn’t mean that they matter any less.  As a human, I am capable of moral and ethical choices.  I am also capable of compassion.  Indeed, it’s what makes me the superior species- if there could even be such a thing since I can’t fly, breathe under water, run 70 miles an hour, or any of the other amazing things non-humans can do.

And it’s exactly why I am vegan.

Incidentally, it surprises me sometimes when I read or hear that folks don’t (or didn’t) know the connection between dairy and veal.  I don’t know why that it surprises me, I had to learn it, too- no judging here.  So, for educational (and ironic) purposes, here’s what Veal – Wikipedia has to say:

Veal is the meat of young cattle (calves), as opposed to beef from older cattle. Though veal can be produced from a calf of either sex and any breed, most veal comes from male calves of dairy cattle breeds.

There are five types of veal: