For instance, how much do you know about lobsters? Some people aren’t aware that lobsters aren’t red unless they are cooked.  We teach our children that lobsters are naturally red, look at any cartoon lobster and see. Try using Google for an image of a lobster and you’ll be hard pressed to find one that is a lobster in its natural habitat (and still alive). Lobsters are fascinating- maybe a bit angry, but you’d be too if your legacy was a smiling face on cheap plastic bibs.

Male Lobsters are quite territorial and will fight over pretty much everything, all of the time.  They duel constantly to establish dominance over each other and to gain the best house.  Lobsters form these little neighborhoods and one male establishes himself as the alpha.  Once he does, he continually goes out and beats up all the other lobsters- just to keep reminding the other lobsters who’s in charge.  That’s some thug life stuff right there.

Lobsters can also recognize each other as individuals through the scent of each others urine- which is decidedly more disgusting than a hand shake.  Urine, it seems, is pretty potent to lobsters- female lobsters use it to cajole males into a romantic mood.  When ready to mate, she goes to the alpha males shelter (apparently being turned on by watching the males get beat up) and squirts pheromone-laced urine into his little house.  The males love this and spreads it around get himself in the mood.  I like candles myself, but to each their own.

The female has to do that several times (and a few other courtship rituals like dancing- talk about work) before the male will let her in.  Once she gets in, she has some serious work to do.  The female lobster can only mate once she has molted her shell.   So, by mating with the alpha lobster the female actually gets protection when she is at her most vulnerable.  Aw, sweet- right?

Once that happens the lobsters enter into a kind of domesticated bliss for about ten days.  The female lives with him until her new shell hardens up, then she moves out.  That’s it, they’re done with each other.  Don’t feel sorry for the male lobsters though, there is a new female waiting in line to mate with him.  In fact, all the females in the neighborhood mate with the alpha lobster.  The beta males, poor guys, never get any of the ladies.

Did you know that female lobsters carry their children for nine months like us?  True.  Also, they can live to be 100 years old.  And, they have a sophisticated nervous system- meaning, they can feel pain.

Sadly, as amazing as these animals are, most people simply see them as a luxury meal at a seaside restaurant.  When we aren’t killing them for food (20 million a year in the US alone), we are poisoning them with the pollutants we dump around our coastal grounds.  See, lobsters bioaccumulate various pollutants in fat rich tissues, and it’s not known what the long-term effects of these pollutants have on the health of lobsters.  What we do know is that accumulated pollutants in any living thing isn’t good, so it’s probably safe to say that it isn’t good for lobsters either.

Another thing we know about lobsters- they are used as neural circuit models, models of hormonally-induced aggression, and are used to better understand the aging process of muscles. In other words, humans test on lobsters just like they test on millions of other animals.

You can help lobsters by rejecting the idea that they are food and living vegan. Because seafood is not food at all.  Sea life are millions of animals deserving better.

Love Lobsters? Who doesn’t?! Show some lobster love in our Lobster Shirt! 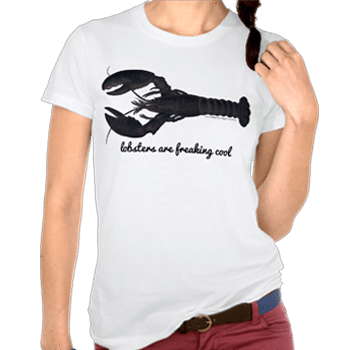 Because Lobsters really are freaking cool!