How Vegan is the Starbucks Pumpkin Spice Latte? 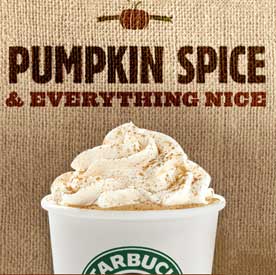 Everything is nice, except the milk that's in it.

Fall is quickly approaching.  The leaves are falling, the air is starting to get cooler, kids are going back to school, and pumpkins come into season.  And with that comes Starbucks Pumpkin Spice Latte.

I’ve written about the latte in 2009 before in Fall ushers in some hidden dairy products, which has consistently been one of our most-read posts- particularly this time of year.  So I thought I’d update it.

In 2009 the ingredients for the Pumpkin Spice Latte were as follows:

I called Starbucks customer service today and got the ingredients for the 2011 version of the beverage, which is:

So, the 2011 Pumpkin Spice Latte made with soymilk and no whip is not vegan.

I said it before but it bears repeating:

It is a valuable lesson in what I like to call, “veganomics”.  Always check the ingredients, never assume, and don’t be afraid to express disappointment that the offerings aren’t vegan.  The more we speak up on the issue of hidden animal products in our foods and beverages, the more people will hear.  The more people that hear, the more people think.  And the thinking leads to education, which finally leads to self morals and ethics.  So in a round about way, telling Starbucks you love the Pumpkin Spice Latte – but won’t buy it because of it’s hidden dairy products – can lead to others discovery of animal cruelty.

So listen up Starbucks, vegans would like to drink your Pumpkin Spice Latte.  Quit adding the crap like condensed milk and please start serving up some vegan lattes.  You’ve made great strides already by offering up vegan fare.  Let’s keep the momentum going and get a full menu that vegans and non-vegans can enjoy, and let’s leave the animals (alone) off of it.

PS Starbucks: Your customer service representative was super nice on the phone.  I appreciate how she went the extra mile to help me get an ingredient list.  Bravo!  I only wish she had told me her name.