Open Thy Vegan Mouth and Speak Out 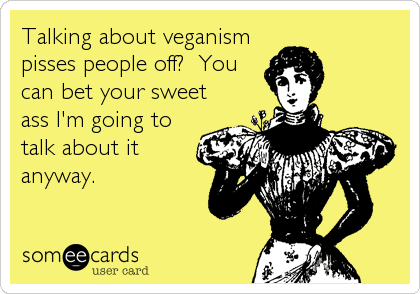 I was once told that there are two things you don’t discuss in polite company, religion and politics.  The idea was that these topics are controversial, and by discussing them one could inadvertently offend someone.  Search Google for “don’t discuss religion and politics” an it’ll net you about 540,000,000 results.  It’s a big topic but the general consensus is the same: don’t do it.

I’ve never been a big believer “taboo topics” myself, rather- I believe our own silence creates a missed opportunity for real discussions about real issues.

Discussions and debates are necessary to develop real solutions to real problems.  Necessary.  You know what else is necessary?  An open mind.

I’ve read good advice, bad advice, and ridiculous advice.  Lately I’ve even seen vegans encouraging other vegans to not talk about veganism unless someone else brings it up first.  Here’s the thing, veganism isn’t any different than talking about anything else.  Can it elicit passionate responses?  Yes.  But ask a diehard Cleveland Browns fan if they like the Pittsburgh Steelers and you’ll get a passionate response.  The only advice you need for talking about veganism is: don’t treat veganism as a taboo topic that you have to coerce someone into talking about, and keep an open mind.

Every person, every single one, has something valuable to share.  The fact is, people are more alike than they are different.

Most people will tell you that they are compassionate, they love their families and friends.  Perhaps it’s not a lack of compassion that prevents them from becoming vegan- perhaps it’s a lack of knowledge.  Everyone is born vegan but we are taught from birth how to consume animals in every possible way.  Sometimes, veganism is unlearning learned behavior.  Believe people are good before proven bad.

But let me be clear.  Respect does not equal acquiescence, and it shouldn’t. Real conversations about real issues need to be had.  People deserve to know the truth.  There are injustices happening to non-human animals every day, ignoring them isn’t going to make them go away.  Not only that, not having these conversations with people is an injustice iteself.  If you have this knowledge about an injustice, then shouldn’t you share it?

If an injustice was happening to you and someone saw it, wouldn’t you want them to speak out on your behalf?  People helping people.  Because, in essence, that’s what vegan conversations are all about- people helping animals.

I’m sick of hearing that vegans need to keep their veganism to themselves.  They shouldn’t, you shouldn’t.  Speak up and speak out.