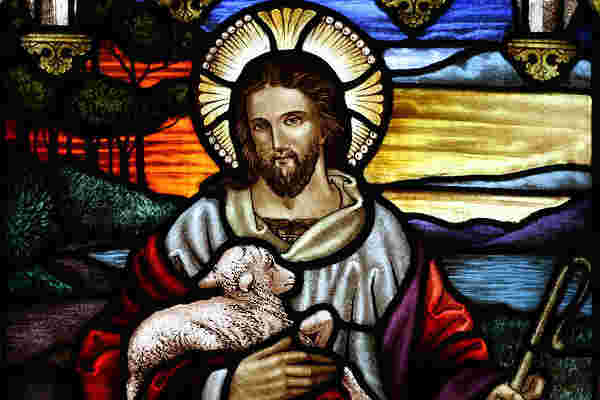 I could go on quite a tirade about why I believe people who commit heinous acts “in the name of Jesus Christ” need to stop, because they’re a bit confused about things. It’s my opinion – and I mean this in the best sense – that Jesus was a hippie. And a non-violent Son of God probably doesn’t want you committing violence towards others in his name.

Let’s talk about violence towards animals. Was Jesus a vegetarian? First of all, I don’t think whether or not he was vegetarian bears any weight on whether you or I are. We’re talking about a man who lived 2,000 years ago. Times were different. “Jesus ate meat, so I can, too” does not a good argument make.

But let’s consider the fact that he didn’t eat animals. Recently the Animal Voices podcast interviewed Andy Alexis-Baker, editor of the book A Faith Embracing All Creatures on Christianity and animals. The discussion led to Bible references and there was no mention in the text of Jesus eating meat, though it did mention him eating fish once, after he was risen.

One of my main gripes about the Bible is that I do not accept it as the Word of God. At best, perhaps it is man’s interpretation of the Word of God, and it has been translated into many languages and versions across the centuries. Wouldn’t it therefore be fair to suspect that some words have been mistranslated, and maybe “fish” did not in fact mean what we think it does?

In Kamran Pasha’s research on Christianity, he came upon Keith Akers’ book The Lost Religion of Jesus: Simple Living and Nonviolence in Early Christianity – a text that speculates that the Jesus’ crucifixion was a direct result of his stance on animal rights and his rejection of ritual animal slaughter.

This hypothesis is all the more interesting considering another that was brought about at the turn of this century. Thirteen years prior to Pope Francis taking the name of a saint known for his love of animals, there was a candidate to succeed Pope John Paul II, Cardinal Giacomo Biffi, who theorized that the Antichrist was “disguised as a philanthropist supporting creeds like vegetarianism, animal rights or pacifism,” but his true aim was to undermine the Catholic church.

Of all of the “evil hides among us” stories I’ve heard over the years, I must admit that I was taken aback by the suggestion that an animal rights pacifist is the Antichrist. Compassion? Non-violence? It doesn’t make sense to me. But then, neither does the fact that the Catholic church has a history tainted by both violence and intolerance.