What You Should Know Before Bringing Home an Easter Bunny 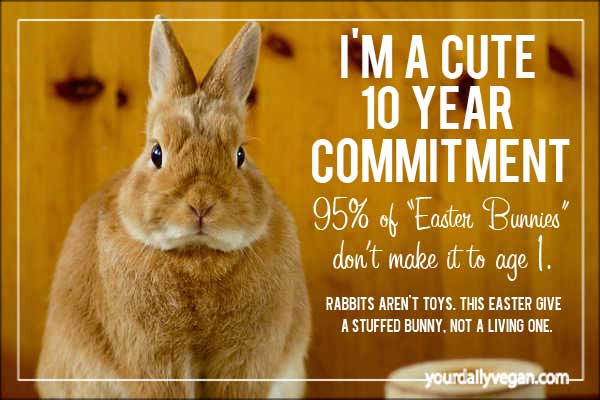 Did you know that thousands of domestic rabbits are purchased for Easter? After cats and dogs, rabbits are the most prevalent animal you’ll find at a shelter. But some statistics say that 95% of “Easter bunnies” given as gifts don’t make it to age one.

Not that anyone should ever purchase an animal from a pet store, but in some cases, pet stores sell the rabbits up to a full month before they should be separated from their mother at eight weeks old. Did you know that rabbits don’t wean until aged 6-7 weeks?

Many bunny buyers have no idea that caring for a rabbit is a ten-year commitment, including house-training (rabbits can be kitty litter trained), bunny-proofing your house (rabbits like to chew on wires, among other things), several hours of daily playtime, and spaying or neutering. Contrary to popular belief, rabbits are not the “perfect” animal for small children, who are often too excitable for them. Rabbits like the ground and feel frightened when they are held and restrained, leading them to kick and scratch, which can cause injury to whoever is holding them. They also have fragile spines and if they are dropped, their backs could break.

When some people realize they are in over their heads, they will release their family pet into the wild – a dangerous choice, since domestic rabbits are not the same as their cousins and don’t fare well out there at all.

As with any decision to take an animal into your home as a companion, the decision should not be taken lightly and should be thoroughly researched. If you’ve done all the preliminary work and still want to rescue a rabbit, contact your local animal shelter or a rescue organization like Hug-a-Bunny Rabbit Rescue, the House Rabbit Network, or Rabbit Rescue.

Learn more valuable information about the lives of rabbits at rabbitron.com.