Al Gore Not Necessarily Vegan, but Heck Do I Want Him to Be 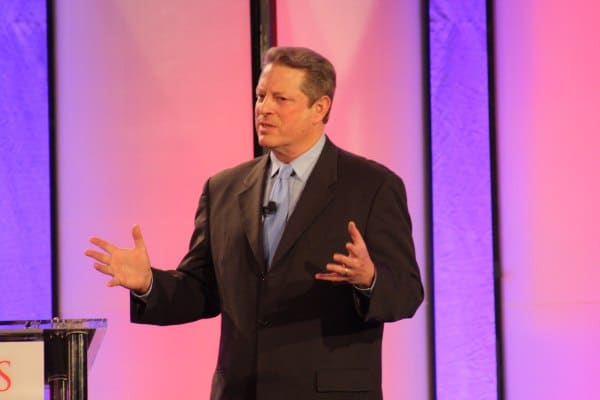 You heard the news, right? Al Gore is eating a vegan diet. If you’re like me, you saw An Inconvenient Truth years ago and have been wondering why someone so concerned about our environment couldn’t make the connection.

I think it’s great (and about time) that Gore isn’t eating animals. The Clinton/Gore ticket is primarily plant-based – how’s that for interesting? But I’ve said it before and I’ll say it again – let’s not get too excited, calling Gore “vegan” in the way that you and I use the term each day.

I have to remind myself of this fact. You see, I was talking to my mother (a big Clinton fan) about this “news” the other day, and I kept calling Gore “Al Vegan.” Relaying this message to someone later in the week, I did the same thing.

What does this mean? I think it’s an example of how much I want Al Gore, you, and everyone I know to really, truly be vegan. When I get pissed about how the word is being diluted, it’s not because I want to be part of some exclusive club. Let me be clear: I care so much about the definition of “veganism” because I want people to come to it – on their own journey, in their own time – with a clear understanding of what it means. I want people to understand that veganism isn’t a part-time choice, or a diet-plan, or just something you do at home when it’s convenient. It’s not “everything but my new, leather-trimmed Coach bag” or “everything but cheese.”

This is not to say that I think a veg-curious person should toss the baby with the bathwater (that saying is all kinds of weird, isn’t it?). If you can’t give up cheese right now, and have eschewed animal products otherwise, good on you. Let me know how I can help! But you aren’t vegan, and my telling you so doesn’t make me too rigid.

I don’t want people to settle for what newspeople, writers, and celebrities are telling them is good enough to be called vegan. I want them to strive for the best they can do – for the planet and for the people, yes, but for the animals, more importantly! It’s getting easier and easier to be vegan in a non-vegan world, but if we let popular opinion define veganism for us, it’s going to hit a brick wall. Let’s not settle for vegan before six, or vegan except for a neighbor’s backyard eggs. Let’s raise the bar a little!