A Wake-Up Call at the NYC Vegetarian Food Festival

As I walked through the New York City Vegetarian Food Festival for the first time ever a couple of weekends ago, I couldn’t help but feel awe-struck and overwhelmed with that feeling you get as a vegan when you know everything in the room is safe to eat. I turned to my partner and said, enjoying the fact that this sentence was passing my lips, “It feels like I’m in a vegan mall!”

And man, wouldn’t an all-vegan mall be the best?

The second I walked in the door there was ice cream, the smell of veggie drum sticks, raw protein bar samplers (of which I took many), chai cookies, seitan gyros, hummus and pretzel packs for on the go (of which I took many, many). Just passing by the next aisle of tables, I had bites of Gardein, Treeline Cheese, Regal Vegan cheese, and Beyond Sushi.  Of course, that was when I could actually pass through the crowds of people that would draw themselves to free food like moths to a lamp. I include myself in that group. 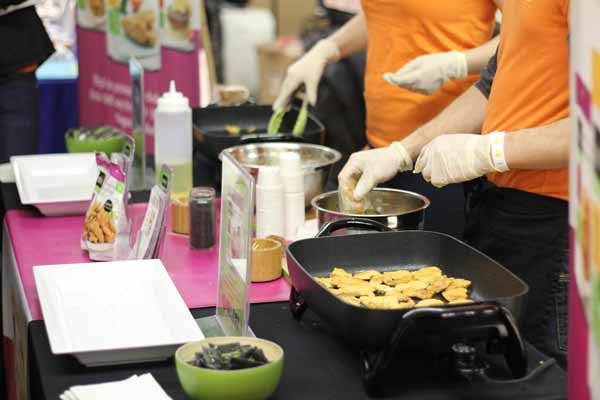 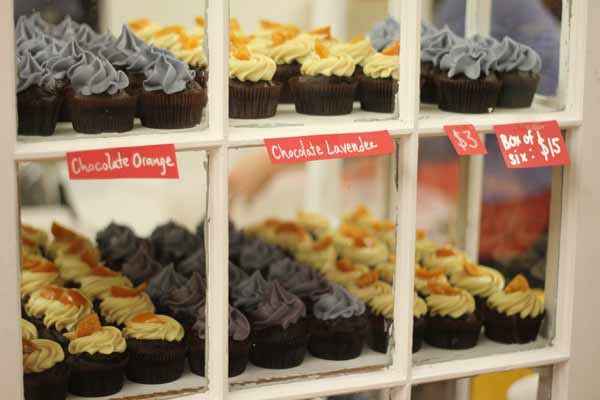 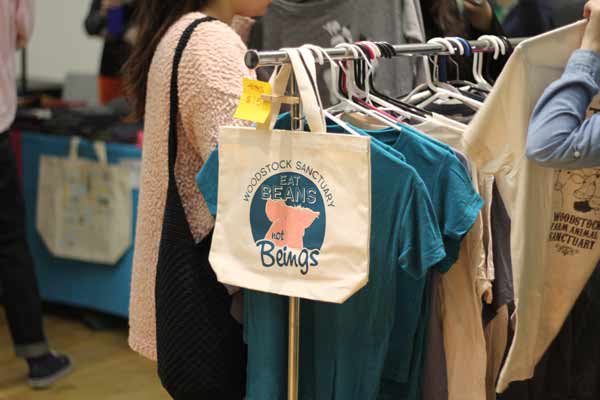 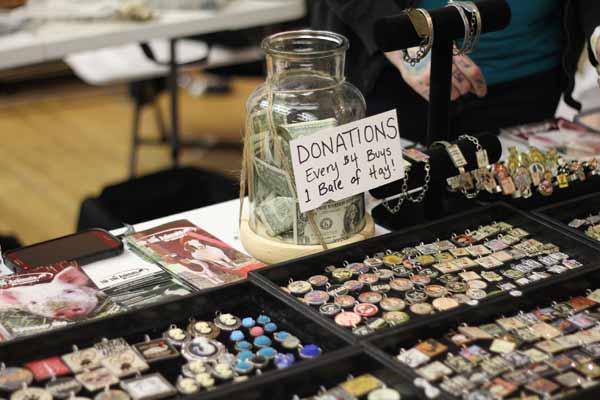 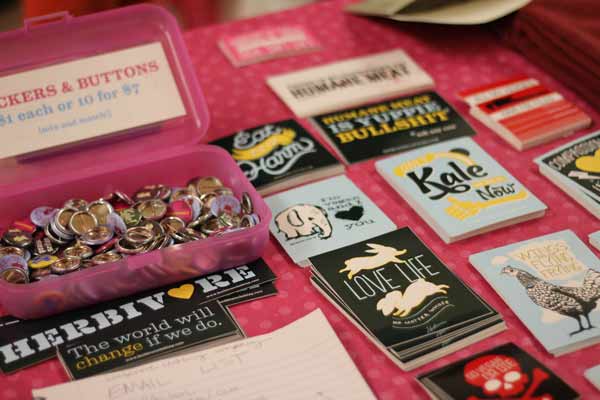 With us was a backpack and reusable bag that would slowly fill as the day progressed. I bought a really lovely unisex t-shirt from Herbivore Clothing Company that had my name all over it, and kept on moving. Our bags began to overflow with bean-flavored chips, protein powder samples, chocolate bars, cashew cheeses and yes, more hummus packs. 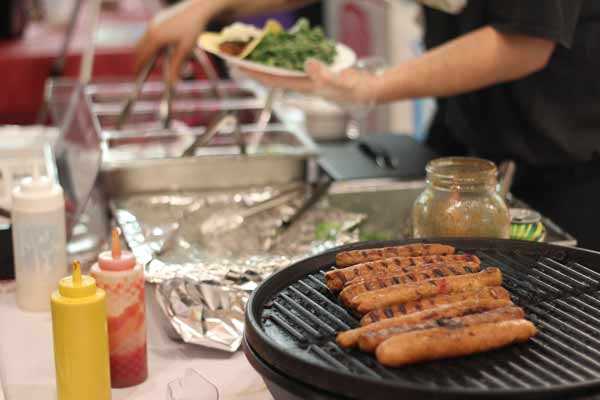 And the eating did not stop from booth to booth. I finally got to try those amazing looking sour cream and onion chips from Earth Balance. And we tried possibly the two best items at the entire fest: local New York vendors Yeah Dawg!, who make the innovative vegan hot dogs made from natural ingredients like root vegetables and seeds, and Alchemy Creamery, a raw organic ice cream shop that also makes ice cream push-up pops in unique flavors.

I followed my nose. If a booth looked to have no free offerings, it was my prerogative to keep moving forward, in search of that next snack. Bumping shoulders nonstop with the hordes of attendees, I barely spoke except to say “excuse me” as the crowds bottle-necked in tight spaces or if I just needed to reach to get that coupon.

My mind felt distracted, even as I saw all of my favorite sanctuaries present at the event; they never looked as crowded as the Peanut Butter & Company table did at any point in time. I was down that food-rabbit-hole as well. At least, until I realized there was a second floor. It was at the top that my eyes fell upon Lucy, a beagle.  Lucy was just one of 120 beagles representing the BeFreegle Foundation, a group that helps rescued beagles find homes after a life of animal experimentation. 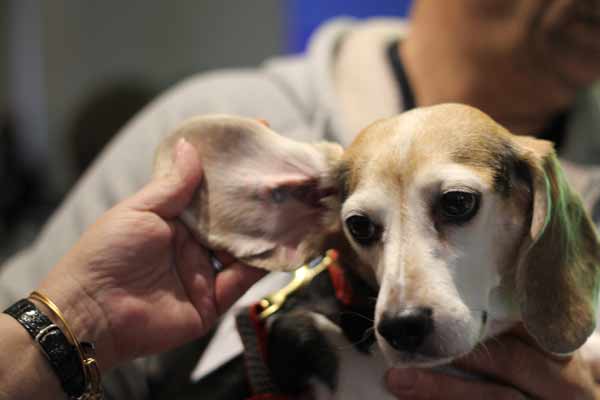 Suddenly my own little vegan world became grounded once more. Lucy’s demeanor spoke to me, from her calm eyes to her trusting nature in spite of everything that had happened to her. I couldn’t believe that in the midst of this celebration of vegan food innovations and snacking, she was here with us, pain and all. And perhaps she, as well as BeFreegle Foundation, was celebrating, too.

Seeing Lucy reminded me, in the flash of a second, why I am vegan, and made me feel like perhaps there should be more, even just a little, of this side of veganism at the festival. I realize the title, “Vegetarian Food Festival,” says it all, but along with the handful of sanctuaries and AR-type groups (Sea Shepherd, Mercy For Animals, etc.), there was only one presentation throughout the whole weekend connected to the ethical side of veganism, on Saturday, the day I didn’t attend. Sunday, there were no such panels or presentations.

I get easily excitable about food; I think all vegans do. I think we love getting excited when we suddenly have one hundred options instead of one, and for me (and especially my partner) it’s a silly little thrill that makes us happy.  I can’t fault any one for attending a food festival looking for a parade of new treats. I just know that the sensation that came over me from seeing Lucy, holding her, stroking her head, and looking her in the eyes was just as surprising, if not more, than any new food. 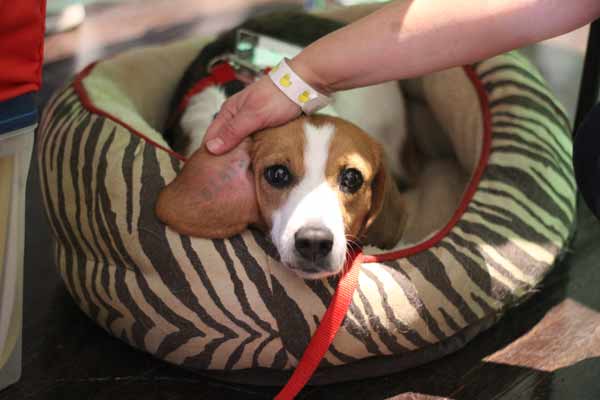 It’s because animals are the vegan makers. Meeting animals at a sanctuary, meeting a beagle that was once tested on in a spot not even far from where you are standing, in the very same state.  Seeing Lucy’s tattoo under her ear is an image with staying power. She is a spokesperson all on her own. Who knows what her presence stirred – perhaps it pushed an attendee’s on the-edge friend who was just there for fun into full force veganism, or taught someone that beagles are just one of many animals tested on for goods we use.

As a first time attendee of the festival, I had fun. In fact, I have so much hummus now I’ll have lunch for two weeks. I highly recommend attending if you’re vegan and want to try the latest new products or food from local vendors. And to the festival runners themselves, I implore them to include more discussions on the side of veganism that isn’t just food or health, but animals. Having Lucy there was a start, and I know someone left that day a bigger animal advocate because of her.