Is Morrissey Vegan Yet? 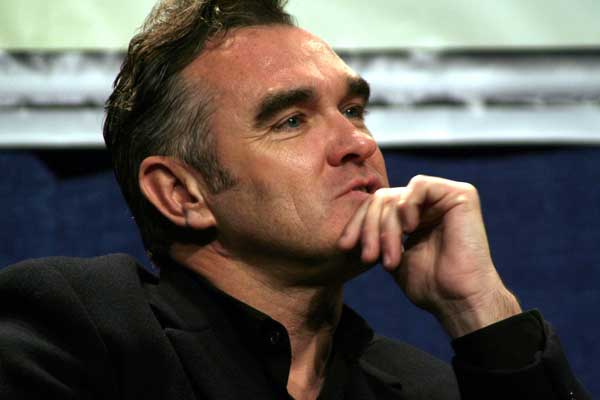 Is Morrissey vegan yet? He keeps making statements, offensive statements that I sometimes agree with. And yet, I keep reading that he isn’t vegan.

How can a man who talks about electrocuted fur victims with such passion, who says he’ll walk away when introduced to a meat-eater, how can he not be vegan?

Why do I care? How is this different than Beyoncé & Jay Z?

Because Moz takes the ethical stance. I mean, he’s been singing “Meat is Murder” for decades. He’s got to know that cheese and leather are, too, right?

If he doesn’t, he’s dropped the ball. If he does and chooses to look the other way, he’s a hypocrite.

Why do I care? How is this different than Bill Clinton & Al Gore?

I am a walking contradiction. I hate the misappropriation of the philosophy I subscribe to, and yet I am fascinated by celebrity culture. I watch Tori Spelling’s umpteenth reality show with reckless abandon. I get excited when I discover that Mayim Bialik, formerly Blossom Russo and currently Amy Farrah Fowler, is an ethical vegan. I get disappointed when Snow White herself, Ginnifer Goodwin, gives up veganism and mocks it on late night television.

So, back to the topic at hand: Morrissey. I know, he really offends people. But sometimes, sometimes he says the things I’d like to say when I’m at my most exasperated, my most fed up, my most utterly befuddled by people who turn a blind eye to the exploitation of billions of sentient beings every day.

2009: Morrissey leaves the stage at Coachella, explaining “The smell of burning animals is making me sick. I can smell burning flesh . . . and I hope to God it’s human.” (Ok, I would only say half of that statement, if I in fact had a sense of smell.)

[sic]. Though that is nothing compared to what happens in McDonald’s and Kentucky Fried s—- every day.”

2013: On cancelling an appearance on Jimmy Kimmel after learning the Duck Dynasty crew was also scheduled: “As far as my reputation is concerned, I can’t take the risk of being on a show alongside people who, in effect, amount to animal serial killers.”

2014: Just this week, at a Denver, CO concert: “Of course freedom does not just mean for humans. I drove past the Denver Zoo, which boasts 4,000 animals from around the globe but I suppose what they should really say is 4,000 trapped, unhappy, suicidal, imprisoned animals.” and “I drove through Greeley, which is of course the murder capitol of Colorado. And if you don’t believe me, ask a cow.”

The guy’s got to be vegan, right? Someone please settle it for me, once and for all.