Editor’s Note: Since the news broke, there have been several online petitions asking Ringling Bros. to send the elephants to an elephant sanctuary rather than the CEC. I found this one that shows testimony from the general manager of the CEC admitting that elephants are routinely chained up at night and males aren’t permitted to be outside on the grass, among other things. These elephants deserve better. Let’s work together to get them to a proper sanctuary where they can live out their days in peace. Also be sure to check out 7 Ways to Help Elephants Right Now. – KD

The news that Ringling Bros. is retiring elephants from their circus was shocking. It was also very well-received by much of the animal rights community. Is it perfect? No, far from it. But it’s a win for those elephants if it means they aren’t going to be beaten anymore so they’ll perform tricks.

Listen, I know – it’s going to take three years to get the Ringling Bros. elephants off the performing circuit. And Ringling’s parent company, Feld Enterprises Inc., doesn’t have any plans to send them to a sanctuary. And the circus is still going to be a horrible place for all of the other animals that are forced to perform, at Ringling and in other circuses throughout the world.

I get that. And believe me, I understand not cheering for some token “victory” that means nothing – it’s one of the reasons I was so underwhelmed by the “cage free eggs” decision that HSUS and United Egg Producers agreed on a few years ago. “Cage free” doesn’t mean “egg and chicken free.” It doesn’t mean no more chickens, living and dying in horrible conditions.

Here’s why I think an “elephant free” circus is different. Not perfect, but different.

1. One of the reasons behind Ringling’s decision is public perception.

People are aware of the treatment of elephants in the circus, and they don’t like it. Bullhook bans have been sprouting up in cities across the country – the people are out there, and they know what’s going on. Feld Enterprises says it’s not reacting to its critics, but fighting legislation about where they can bring their show is expensive. Well, perhaps they aren’t reacting to the tugged heartstrings, but they are certainly reacting to the tugged pursestrings. Legal aid at the defense of animals matters. Hitting a corporation’s profit margin matters. Are any of us really expecting a corporation that exploits animals for profit to suddenly care about animals? No, that would be naïve. We need to speak to them in the language that matters to them: money. If public perception affects their profitability, you can bet it’s behind their decision.

2. This change could mean more is on the way.

Again, Ringling doesn’t seem to have any plans to release its lions and tigers, and it just added a new camel act to its show. We need to change that – through protest and through education. But maybe no longer having elephants perform in the most well-known circus in the country will help elephants in the smaller circuses. And maybe another large mammal who has gained public awareness over the past few years will gain some help from this (looking at you, SeaWorld). In fact, wouldn’t it be logical to assume that Ringling has been watching the post-Blackfish backlash against SeaWorld? Wouldn’t it also be logical to assume that they see retiring the largest mammal in their possession as a direct response to that backlash? It makes them look good to the public at large. So, let’s get to work on making them end animal use all together. Let’s make them stop using smoke and mirrors and really change things!

3. There won’t be any new elephants born, bred, or captured… to perform.

This last one comes with a big caveat. The performance piece of the puzzle is ending. But let’s take a closer look.

The 13 performing Ringling Bros. elephants will live with others at the Center for Elephant Conservation in central Florida once they stop performing.

With a total of 43 elephants, Feld owns the largest herd in North America, and spends about $65,000 yearly to care for each one. New structures will be needed to house the retiring elephants at the rural center, which is close enough to Orlando to attract tourists eventually if that’s what Feld decides to offer.

Kenneth Feld said initially the center will be open only to scientists and others studying the Asian elephant, but he “hopes it expands to something the public will be able to see.”

Unfortunately, it sounds like these performing elephants aren’t going to get the peace, quiet, and privacy from human eyes that they deserve. It’s quite obvious that Feld still sees them as an attraction.

Of note: the Center is where Ringling Bros. elephants have been trained re: beaten and bound with ropes to break their spirits. For more about what has been done to elephants at the Center, you can read the very explicit declaration of former handler Samuel Dewitt Haddock Jr. To be clear, the Center for Elephant Conservation is not a nice place. But if you’re asking me if I’m going to celebrate the fact that they won’t be beating the shit out of their elephants, yes, I will be.

The Center also conducts what they call “breeding research,” artificially inseminating captive females to “enhance genetic diversity” and “ensure a healthy Asian elephant population throughout the world.” It’s a breeding farm. Sadly, this isn’t going to stop. Elephants will still be sent to zoos and sold or traded off as property. Again, Ringling, and the Feld Corporation, does not care about its animals.

It’s horrible to have to say this, but the elephants in Ringling’s possession (and I use that word because Ringling very much still sees them as property) were doomed from the start. It’s heart breaking to have to say that they will never have a chance at sanctuary, or at a life they can live on their own terms. But if they aren’t going to be beaten anymore, and paraded around towns to “bring in the circus,” that’s got to be an improvement over what they’re currently living. Not nearly enough, but something.

It’s clear we have a long way to go, and I wish that meant better for the Ringling Bros. elephants. Not getting beaten with a bullhook is a little better. Not breeding more elephants for performance is a lot better. Ending the mindset that animals are attractions would be best.

The decision to end the use of elephants in Ringling Bros. circus does not mean anyone should rest on their laurels. There is still work to be done and there are still animals that need us. 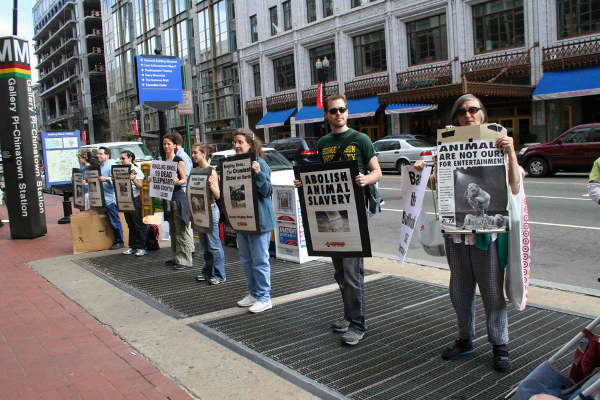