Ricky Gervais is on a rampage. Have you heard? He is going after trophy hunters hard, and he tells you so in his own words in his April 22nd Facebook post: 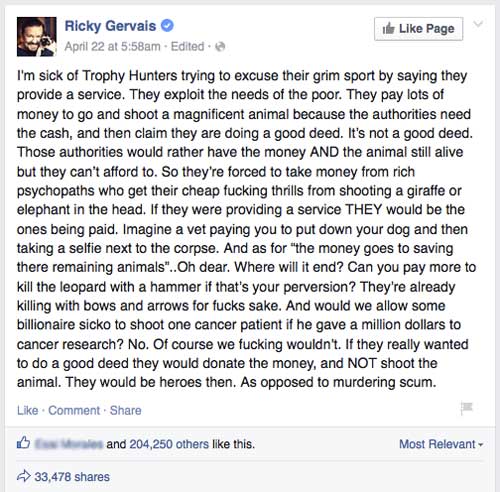 I don’t like trophy hunting any more than Ricky Gervais does. But last I heard, Ricky Gervais eats animals – not giraffes, rhinos, and elephants, but fish, and cheese, and “humane” meat.

I’m having a really hard time with this.

I know it’s not uncommon. There are plenty more people out there who love some animals and eat others than there are vegans who – love them or otherwise – do not eat or use animals. And on both sides, there are so many people who are throwing praise Ricky’s way. “He’s a hero! He’s a voice for the animals! Trophy hunters are disgusting! Let’s give the animals guns and make it fair!”

How many of these pro-Ricky Gervais comments are made by vegans? How many are made by people who eat animals? Would they want to give the cows, chickens, and pigs weapons in the factory farm where they are processed into meat cuts? How about the caged foxes and minks who are going to be electrocuted for their fur?

What weapon will we give the Beagles who are used for research and testing?

Some vegan websites have joined the Ricky Gervais praisers, and some animal activists have called them out for doing so. Of course, this means people are pointing fingers in all directions. “At least he’s doing something! Why are you so judgy? VEGANS ARE SELF-RIGHTEOUS JERKS AND I AM GOING TO GO EAT A STEAK WHILE I PROMOTE RICKY GERVAIS’S HEROIC FIGHT AGAINST TROPHY HUNTERS.” (Sorry, my caps lock got stuck.)

I understand why this situation is heated, no matter which side of the line you stand on. But how do we debate this rationally? How do we get people to see that demonizing trophy hunters while eating farmed animals is hypocritical? Moreover, how do we lead well-intentioned omnivores to the conclusion that a pig is a dog is a giraffe, and that speciesism has no place in animal rights?

Why must any point we bring up be deemed, “Something is better than nothing, would you rather he didn’t speak up? The animals don’t care if Ricky Gervais is vegan, they care if they get to live.” As if the fact that an individual animal has his interests at heart means we, as human beings, should not be looking at the bigger picture. Or that our grasp of the bigger picture is incorrect.

“Animals don’t care why – they just care that they get to live.”

Yes, of course, but if most humans are speciesist, that means some animals get to live, and some do not. In this case, people think trophy kills get to live, but factory farm animals don’t. In the case of Meatless Mondays or Veg Weeks, it means animals get to live on certain days or certain weeks, but not on others. And in the case of vegetarians, they aren’t directly contributing to death in their minds, except, you know, veal = dairy so they are.

I understand why there is a popular opinion that single issue campaigns don’t work and I don’t entirely disagree with that opinion. But I’m not saying that people shouldn’t care about the victims of trophy hunters – they should. I’m certainly not saying they should stay silent on the matter – they shouldn’t.

What I’m saying is that we need to have a larger discussion and try to make it easier for people to relate the animals they live with to the animals they eat to the animals in zoos and circuses to the animals used in fashion… the list goes on and on, until it circles back to us. It’s not some trite cliche that we are all Earthlings. And in the way that matters – the one that starts with sentience – we need to grab that common thread and hold on, very literally, for dear life.