It’s July 14th again. I’m finally sitting down to write. I have sat down to write every July 14th for the last twenty years. Sometimes I write in a journal, keeping my darkest thoughts and grief to myself. Other times I write an article that is just a little too personal to make me feel completely comfortable hitting “publish.” But I still do.

You see, July 14th is a special and bittersweet day. It is my son’s birthday. Today he would have been 20 years old. Would have been because my son was stillborn.

There is an abundant supply of explanations and medical terms that describe what happened to my son- but they’re just words. None of them change what happened. Jonathon was full term and was born several days before my due date and two days after his father’s birthday. Circumstances meant that I was forced to have a natural birth, knowing that my son was already gone.

My son would be 20 years old today. I can’t help but wonder about the man he would have grown up to be. I’ve been a vegan for more than a decade now; would my son share my values? Who would he look like at twenty? Would he be taller than me? Would he be kind and gracious? Would he be happy? It is a surreal feeling to wonder about a child that you only knew through pregnancy. For nine months I carried him- for nine months I felt him move. And to lose him, well, it’s devastating in a million ways.

My son is gone and he took my motherhood with him. Jonathon will be my only child. But because he died, I am forced not to mention his existence. People don’t want to talk about dead children, they just don’t. Hospitals aren’t equipped to deal with them, and parents of stillborn children are left to fumble their way through a devastating time with little advice or support. Worse, without their children being acknowledged as children.

I know what it is like to create life, to carry it inside you, and the pain of childbirth- yet I’m not called a mother. I never had an opportunity to mother my child, it’s true, but I am a mother.

For the past few years I’ve been writing about Jonathon here on YDV, I’ve done so from my viewpoint as a mother. First in this post, Don’t Take the Babies, and then again in We Don’t Need to Be the Same to Care. In each, I compare the loss of my child to that of a non-human animal- noting that both are painfully the same.

I imagine that cows, chickens, pigs, horses, birds, deer, racoons, squirrels, and any animal that creates life, brings it into this world, would feel the same if they lost a child.  I imagine that their grief is as painful as mine.  And like me, I doubt that these mothers ever forget their children no matter how many years pass.

The pain of loss is universal and not limited to species. Neither is grief.

Billions of female animals are exploited for their reproductive capabilities every year. Mothers are enslaved, manipulated, tortured, and eventually slaughtered for human profit. Their children are either forced back into the cycle of use or immediately killed for being the wrong sex. As a mother, I can tell you that the loss of my child is one of the most painful experiences that I have ever or will ever have. Yet every day, hundreds of thousands of baby animals are taken from their mothers within a few hours of being born.

Take Riya Aurora for example, a 4-year old Guernsey cow on a dairy farm in Ohio. A mother who experienced the loss of her first three calves:

She was purchased, forcibly impregnated, and had her first three calves taken from her shortly after their births so her milk could be used for sale and consumption in the human market. She suffered chronic, treatment-resistant mastitis for years which ultimately lead the farm to discard her at auction, but not before impregnating her once again in an attempt to raise profit by selling her as a “bred cow.”

Riya did go to auction. Luckily, a young woman and her mother stepped in and purchased her at auction and transported her to Lasa Sanctuary, an animal sanctuary in Ohio. But like so many other cows, Riya was permanently scarred from her time on that dairy farm. She had a severely compromised udder that required months of treatment to subdue.

Riya was pregnant when she arrived at sanctuary. And, after several months, she gave birth to a girl who would later be named Skye Julian. It should have been a wonderful time – after all, both mother and child were at sanctuary. 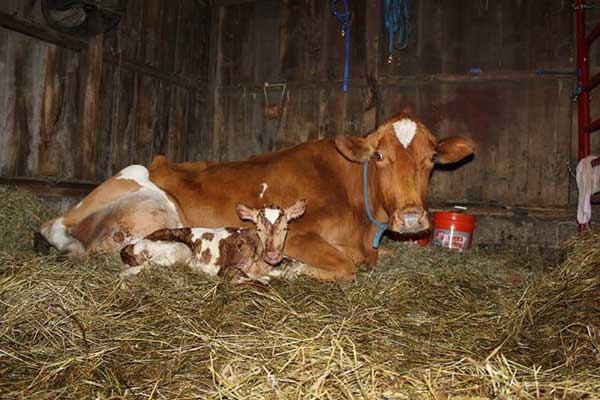 But the damage from the dairy farms had already been done:

What we didn’t know was that Riya’s complicated mastitis never left.  It had hidden dormant, most likely for years, and when she freshened (lactation started) the increased bloodflow to the infected area sent the infection surging throughout her body.  She became septic and went down Wednesday morning with what appeared to be simple Milk Fever, a life threatening but treatment responsive condition caused by decreased calcium levels common after calving.

We dreamed of Riya and Skye grazing side by side for life. We dreamed of victoriously breaking the cycle of Riya having her babies taken from her.  It’s such a cruel twist of fate that though we were able to save her from auction and ongoing life on a dairy farm, in the end the farm still broke their bond, this time by taking Riya away from her baby.

It’s a challenge to avoid blaming ourselves sometimes, the questions and guilty insecurities never leave.  But the truth is simple.  The farm did this to her. The dairy industry did this to her. She deserved love, compassion, respect, freedom, and family and what she got there was a life of infection, imprisonment, and broken bonds.  The farm knew she was sick, they knew this could happen, but they chose profit. It’s Riya’s face that will forever flash in my mind when I hear someone say they can’t give up dairy.

You can read Riya’s full story on the Facebook page of Lasa Sanctuary here, Remembering Riya.

When I think about the exploitation of non-human mothers, I immediately think of the dairy industry. It employs some of the most heinous crimes against mothers in our industrialized food system. And yet, most people have positive feelings about consuming animal-based dairy products. They are shocked to learn how milk is actually produced, and about its direct connection to the veal industry. I want to change that. And I want to start by saying that loss is universal. Animal or human, it doesn’t matter. Grief transcends species.

Happy Birthday, Jonathon, you are loved.

Please learn more about how the dairy industry exploits mothers by visiting the Vegan Dairy Guide. Quitting dairy has never been easier. From gourmet cheeses to creamy nut milks, vegan choices are abundant. I’ve put together a shopping guide to help point you in the right direction. And, if you’re interested in making non-dairy milk products at home, well, I’ve got you covered there, too. You can do it. Dump the dairy. Let me show you how.