It’s solidly September now, can you believe it? Soon falling leaves, pumpkin spice mania, and colder weather will be upon us. I love fall; it’s my favorite of all the seasons.

Cooler temperatures mean that I crave a hot meal in the morning, and my staple, go-to hot breakfast is oatmeal. Rolled, old-fashioned, steel-cut, or instant; I don’t care, I love them all. I want you to love them all too.

Let’s take a look at the different oatmeal types, and then I’ll give you ten mouthwatering vegan recipes that’ll have you getting up early to make.

Here are five varieties of oatmeal. If you discover that you don’t care for one variety, try another! The textures and taste can vary greatly from type to type.

Rolled Oats. You know these guys, they’re the old fashioned oats of your childhood. Oat groats are first steamed and then rolled into flakes you’ve grown up eating.

Whole Oat Groats. A groat is another name for a grain kernel. Whole oat groats result from merely harvesting oats, cleaning them, and removing their inedible hulls. You can most often find these in health food stores. They take the longest to cook.

Steel Cut Oats. If you cut groats into two or three pieces with a sharp metal blade, you get steel-cut oats. They cook quicker than oat groats because water can more easily penetrate the smaller pieces. Steel-cut oats are also sometimes called Irish oatmeal.

Scottish Oatmeal. Instead of cutting oats with a steel blade, the Scots traditionally stone-grind them, creating broken bits of varying sizes, which some say results in a creamier porridge than steel-cutting.

Rolled Oats. Rolled oats (sometimes called old fashioned oats) come from oat groats steamed and then rolled into flakes. This process stabilizes the healthy oils in the oats, so they stay fresh longer, and helps the oats cook faster by creating a greater surface area. 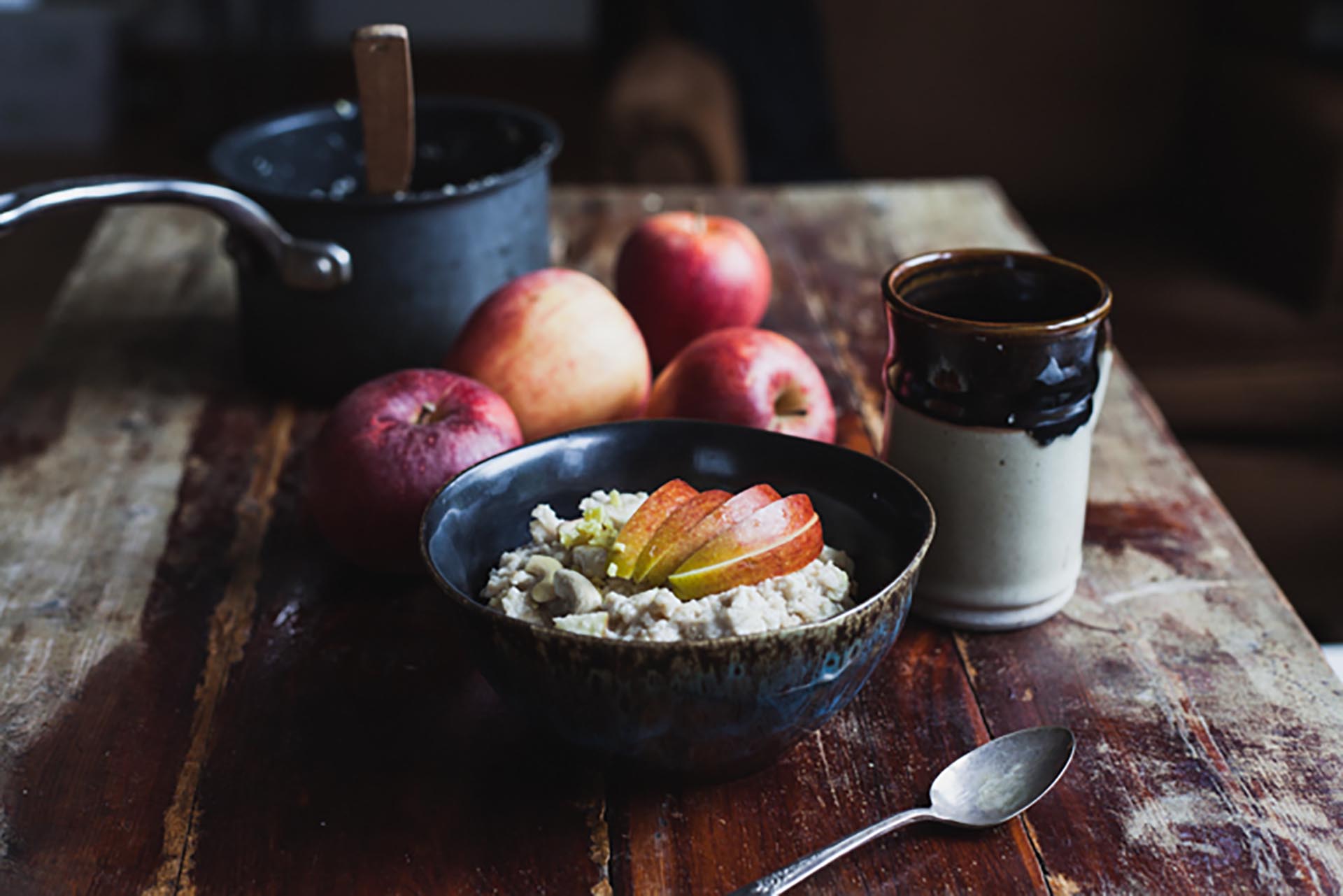 I looked all over the web for recipes that would be reminiscent of fall or that sounded cozy (can oatmeal be cozy? I’ve decided it can). These recipes are completely vegan and gluten-free by using gluten-free oatmeal or raw by using sprouted oats. Most of these call for rolled oats, but you could just as easily substitute for a different type of oat like the ones listed above.

Fall screams pumpkin-flavored everything and these oats from Minimalist Baker sing with fall flavor. Pumpkin married with cinnamon and then topped with maple-cinnamon pecans creates the perfect sweet bite.

Start your day with power with this creamy apple-spiced steel-cut oatmeal made with chia seeds, pumpkin seeds, fresh apples, and bananas from Happy. Healthy. Life. It’s cozy in a bowl.

You’ll find no shortage of oatmeal recipes featuring pumpkin pie flavors, but I love this one from My Darling Vegan because it’s super simple and made with everyday ingredients. I love simple vegan recipes, so this is a win.

Two recipes from Minimalist Baker? You bet. This recipe is infused with sweet potato puree, cinnamon, and brown sugar. Want to take these oats to the next level? Dana recommends you top them with Pumpkin Maple Pecan Granola if you’re feeling fancy, or a few raw walnuts or pecans if you’re not. Either way, it’s fall in a bowl.

This overnight oats recipe is from one of my very favorite bloggers, Rawmazing. Made with typical fall flavors like pumpkin, cinnamon, nutmeg, and ginger and raisins, maple syrup, chia seeds, and sprouted oats. They’re perfect for those following a raw, vegan diet, super simple to make and super nutritious—the perfect combo.

Fall is apple season! It’s the perfect time to make these apple-packed oats from Thyme & Love. Packed with maximum apple flavor from cooking the steel cut oats in apple cider, these oats get even more apple goodness with chunks of fresh apples. It’s a fall apple party for your mouth.

Brandi over at Vegan 8 hit it out of the park with this recipe. Get the flavors of freshly baked cinnamon rolls in a creamy oatmeal breakfast complete with a delicious cinnamon roll icing topping.

Are you ready for a bowl of warm oatmeal filled with pumpkin and walnuts? This recipe from Feasting on Home is quick, easy, and hearty. It’s chock full of fall flavors.

This recipe from Two Spoons features my favorite fall flavors; maple syrup and apple butter. The combination is fall personified.

Finally, a roasted pear and fig oatmeal from Hell Yeah It’s Vegan. This bowl of porridge has everything I love about fall, warm roasted fruit tossed with ginger and cardamom. Is it wrong that I think a bit of So Delicious Vanilla Cashew Milk Non-Dairy Dessert would-be an excellent addition to this dish? No? Is it not just me that eats ice cream with breakfast? That’s good to know.

Do you have a favorite oatmeal recipe that reminds you of fall? Let me know in the comments.