How to Feed Vegans at Thanksgiving

My wife Charleen and I are the only vegans in either of our large extended families. There are no vegetarians either, not even among our friends. We do have vegan friends — but they live further away from us than we’d like — so we don’t get to see them often. Mostly it’s just us at social events as the only vegans.

We’ve been living vegan for almost thirteen years now, which means we’ve been baffling our non-vegan friends and families during the holidays for a long time. My experience has made me a pro at navigating tricky holiday situations with well-meaning loved ones who don’t quite understand what the whole vegan thing means.

I was discussing this with Charleen the other day, and a thought struck me: For the most part, vegans know how to navigate Thanksgiving, it’s the non-vegans who don’t.

That got me thinking.

I’ve already put together an extensive Vegan Thanksgiving Guide that features several shopping guides and more than 150 vegan recipes. There are even separate raw vegan and gluten-free menus, it’s everything you need to plan and create a festive holiday. It’s perfect for vegans or people who are looking to try delicious vegan recipes.

But what about non-vegans? The people not looking for vegan recipes to replace family holiday favorites? Or the people who love a vegan but have no idea how to feed one. People who, even after years of vegan meals together, still ask if you eat fish.

[I’m not making fun, the question is more common than you’d think.]

It’s the non-vegans that I want to talk to today. Did you accidentally invite a vegan to Thanksgiving dinner, or maybe even intentionally ask one? Are you freaking out because now you don’t know what to feed them? Can they drink booze? You don’t know!

I can help with that. 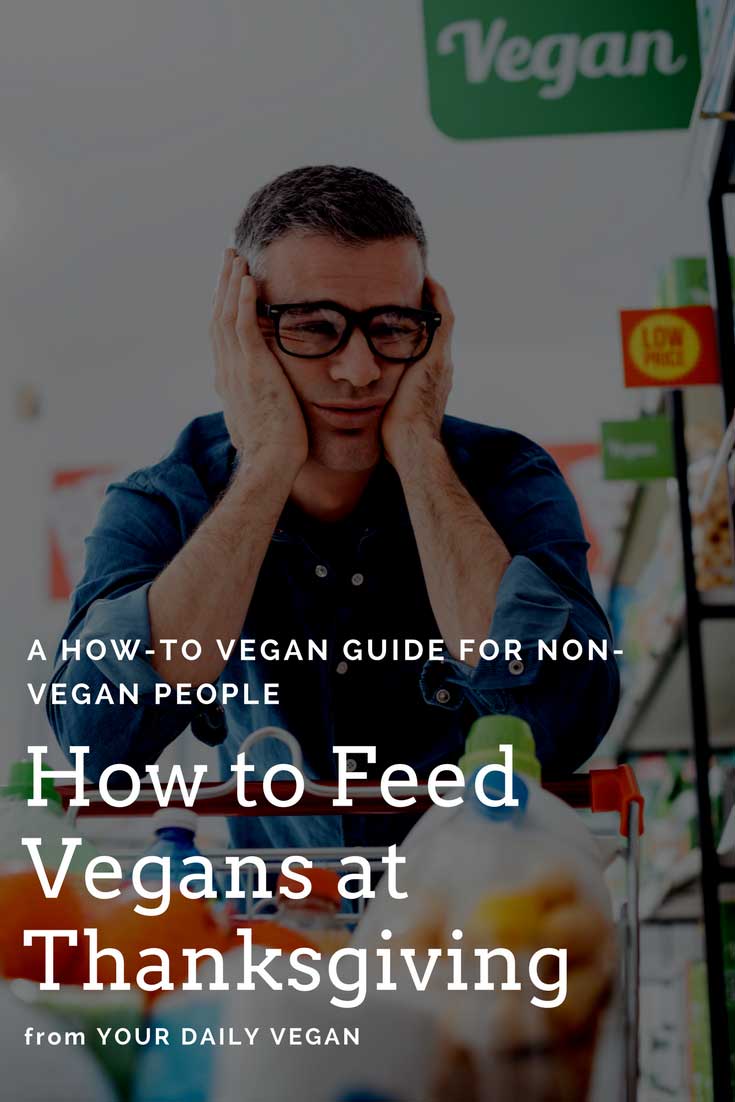 What Do Vegans Eat On Thanksgiving?

The first thing you should know is that inviting a vegan to Thanksgiving dinner doesn’t mean that you can’t serve your family’s traditional meal. Many families have cherished recipes — especially holiday recipes — that have been passed down through generations as a meaningful tribute to loved ones now gone. Mine does.

Instead of changing the menu, change the ingredients.

Generally speaking, turning a non-vegan dish into a vegan one can be as simple as an ingredient swap. Substitutions don’t work for every recipe every time, but many times the best solutions are also the easiest ones.

Here are common non-vegan ingredients found in many classic Thanksgiving dishes, with a few tips on how to make them vegan-friendly. 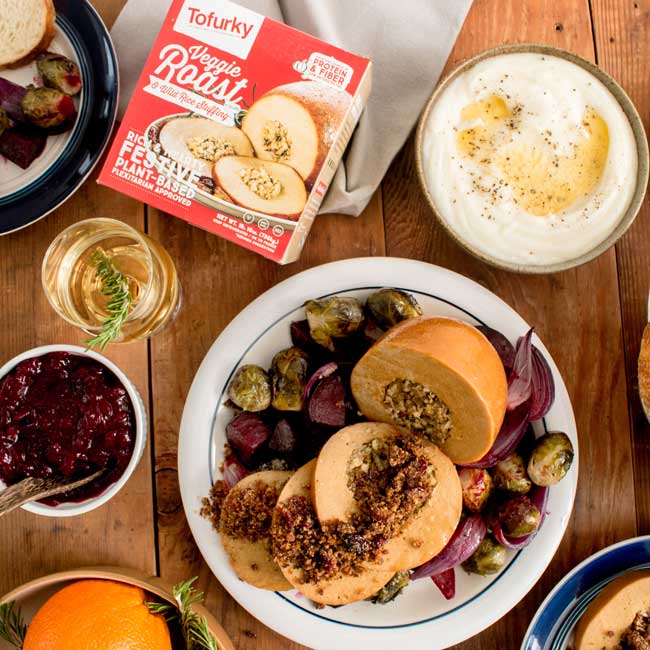 I’ve served vegan turkey alternatives to my meat-loving extended family and never had left-overs once.

You’ll find vegan options at natural grocers like Whole Foods and Trader Joe’s, but you can also buy them at many local grocery stores and even some box stores like Target. Look for brands like Tofurky, Field Roast, or Gardein in the refrigerator or freezer section where other meat-less products are.

Don’t worry; you don’t have to remember all of this. Here’s a visual guide to all the Best Vegan Meat Alternatives for Thanksgiving. 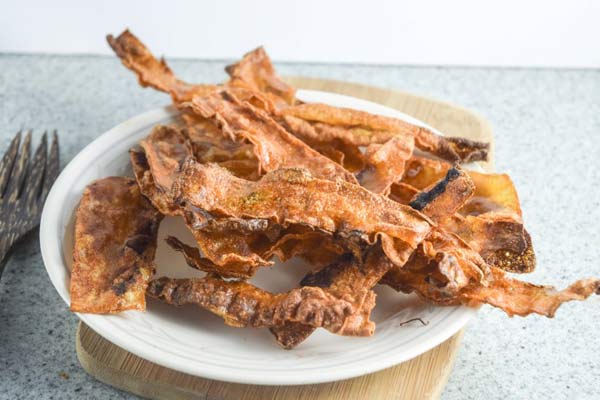 I’m sure I don’t need to tell you that bacon isn’t vegan. The reason that bacon makes this list has to do with the German potato salad that my Oma made for every holiday. It’s a recipe passed between the mothers and daughters of our family for generations.

Perhaps you have a recipe which calls for bacon that’s special in your family too. I have good news for you; replacing bacon is easy; there are plenty of plant-based options, including many homemade versions.

For all things crispy, salty, and plant-based visit this Vegan Bacon Guide. 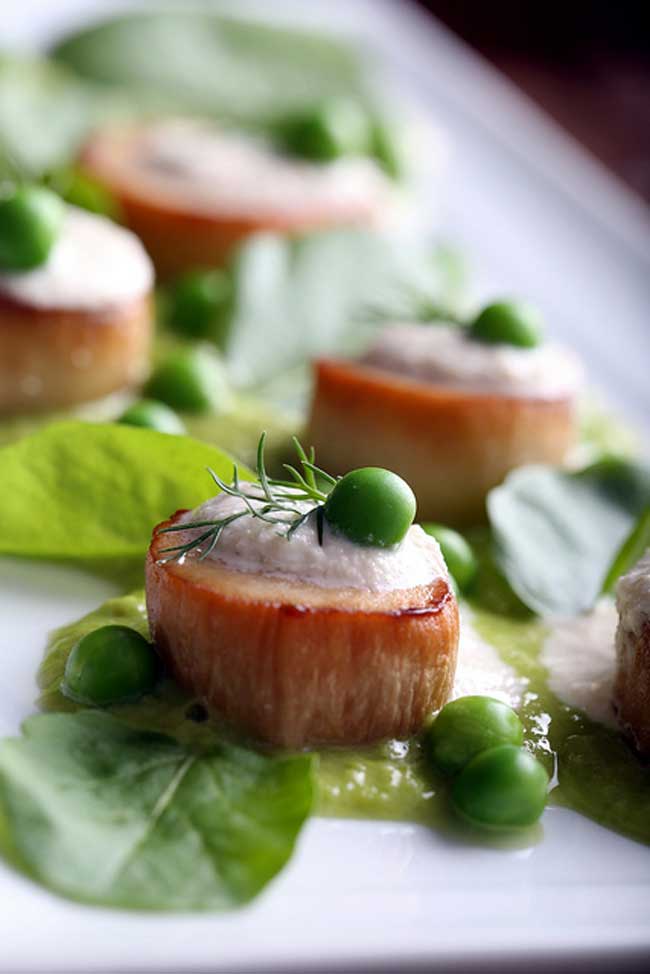 Turkey and ham are apparent, well-known non-vegan main dishes for Thanksgiving, but what about fish and other sea life? Are fish animals and do vegans eat them? This question is much more common than you might think. Yes, fish are animals, and no, vegans don’t eat them.

The good news is, there are several fish-free options for vegans.

Sophie’s Kitchen carries a full line of vegan seafood including scallops, fish fillets, lobster, tuna, and even smoked salmon. If a breaded fish fillet or mini crab cake is what you’re after, Gardein makes fish-less ones. 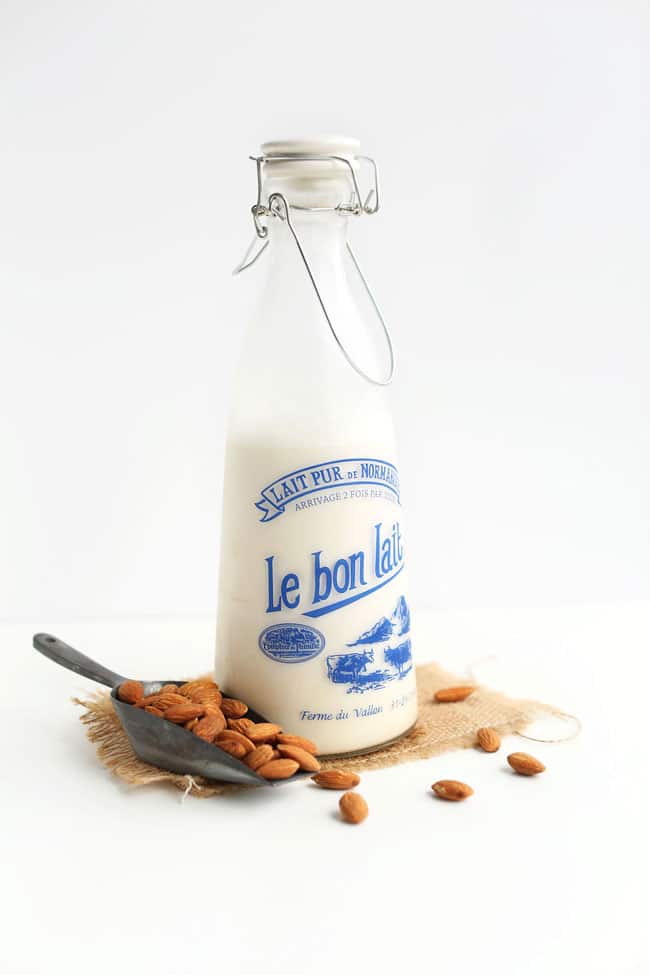 Does your family’s favorite mashed potato recipe call for a good pour of milk? Classic mashed potato recipes do. This comfort food is a staple, and it’s also America’s favorite Thanksgiving side dish. Milk can add a creaminess to mashed potatoes, but it’s not the only place it’s hiding in holiday meals, it can be in bread baskets, on dessert plates, and in drinks too.

Replacing dairy-based milk in recipes is super simple, but it does help to know which dairy-free milk will work best in the methods you’re trying to create.

In general, soy milk is an excellent choice as an alternative in any recipe. It’s thick and creamy, just like you’d expect milk to be. Plus, you can find soy milk in almost any mainstream grocery store. Heck, even Walmart stocks dairy-free milk, which is why it is my go-to recommendation for plant-based milk. Almond milk is just as versatile as soy milk is, though the texture is thinner, and it’s also easily found in grocery stores. Other options include rice, oat, flax, hemp, or pea milk.

Whichever dairy-free milk you choose, it’s important to remember to buy the unsweetened or original version. Some plant-based milk contains flavors or sweeteners, which can add unwanted sweetness to dishes. Look for dairy-free milk in the refrigerated case where the dairy-based milk lives.

You probably know that butter is a dairy product made with milk from animals like cows, goats, or sheep, but what about margarine? Does margarine contain dairy, and is it a suitable butter replacement for vegans? Well, yes and no.

Margarine is just a blend of vegetable oils, but some brands contain small amounts of dairy products such as whey or lactose- both animal products which vegans avoid. Several brands don’t, however, making them accidentally vegan.

Generally speaking, you will be able to find vegan butter or margarine in any grocery store; even some Walmart stores stock it. Be sure to check the label carefully before purchasing. Some non-dairy butter products will call themselves “butter substitutes” or “non-dairy buttery spreads.” Look for whey, lactose, casein, and caseinate on the label, which are common dairy derivatives frequently used in margarine.

Get a complete list of vegan-friendly butter brands — plus some recipes to try at home — in this Vegan Butter Guide. 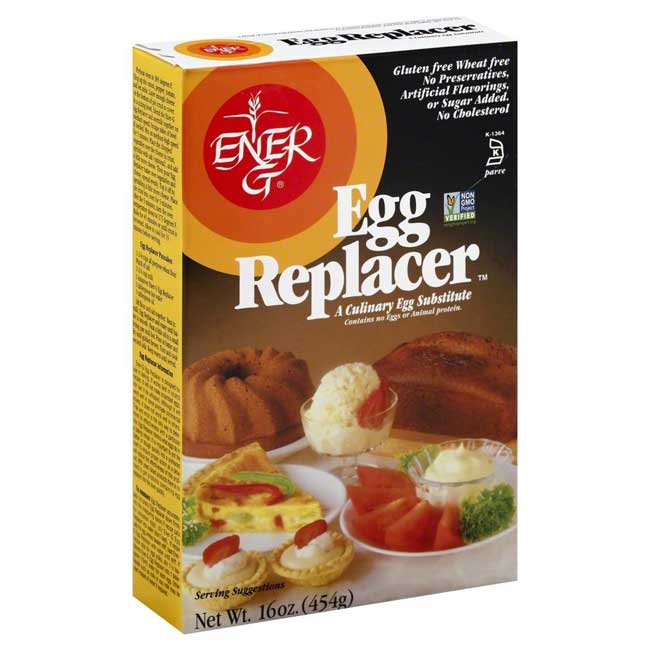 I get questioned about eggs a lot as a vegan. The reasons why might not seem evident at first, but vegans don’t eat eggs, so we’ll avoid those holiday dishes that contain them. Luckily like milk, eggs are incredibly easy to replace in recipes, and there is no shortage of options.

But, all egg replacers are not interchangeable. What might work in one recipe won’t in another, or even change the flavor of the finished product. For simplicity and ease, I recommend first-time vegan bakers and chefs use a powdered egg replacer like Ener-G Egg Replacer or Neat Egg, which are widely available. Look for them in the baking aisle of well-stocked grocery stores.

If you’re looking for a product that doesn’t just replace eggs but mimics them instead, look no further than the Vegan Egg from Follow Your Heart, found both in the baking aisle and the dairy case along with the eggs. 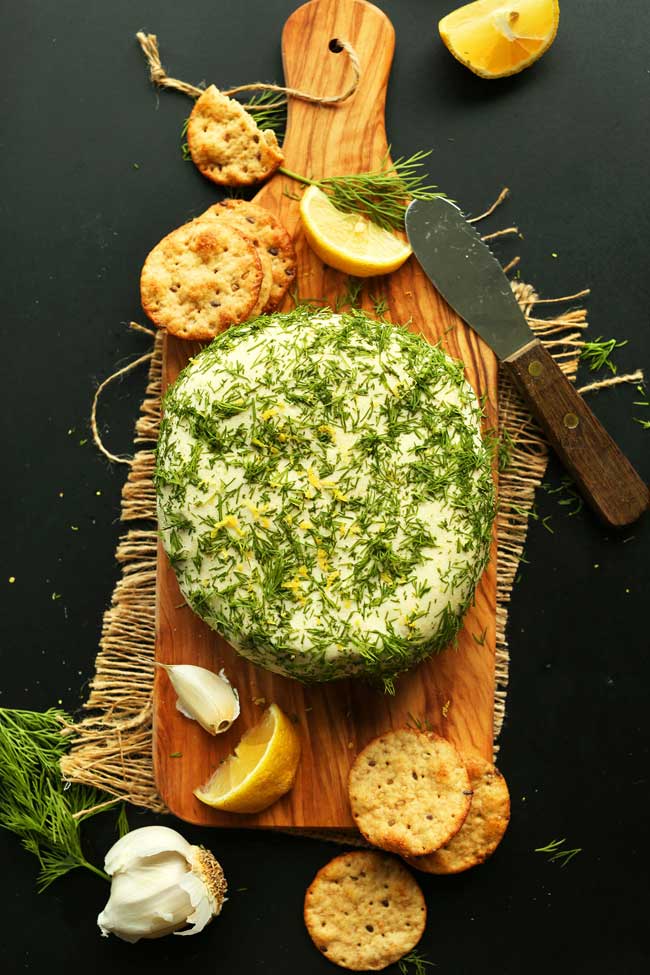 If you can’t imagine how vegans live without cheese I have a secret for you; we don’t. But instead of dairy-based cheese, vegans choose cheese made from things like nuts, nut milk, seeds, or even beans. And with so many different types available, you’re sure to find one that you love.

Looking for melty cheeses? Find bags of shredded cheeses by companies like So Delicious, Daiya, or Follow Your Heart. Or, maybe you’re searching for spreadable cheeses like cream cheese? Find tasty options from brands like Kite Hill, Daiya, or Tofutti. Are you looking for sliceable blocks of cheese for party trays? Companies like Follow Your Heart and Daiya make a variety of flavors. For gourmet, artisanal cheeses I highly recommend anything from Miyoko’s Kitchen.

If your family traditions are anything like mine, pumpkin pie always made an appearance on the Thanksgiving table. My mother would serve generous slices of our favorite pie with — and this is my favorite part — mounds and mounds of whipped cream. It was dessert, perfected.

In my family, we favored the whipped cream that came in those blue plastic tubs. Any chance I got, I would grab the biggest spoon possible and eat as many mouthfuls as I could. To this day, whipped cream remains one of my favorite foods.

I stopped eating dairy-based whipped cream when I went vegan, and at that time, there wasn’t a vegan version that had the same thick, luscious creaminess of my childhood favorite. That was, until now.

So Delicious Dairy-Free CocoWhip is everything that is right and good about whipped cream. It’s thick and creamy, so it reminds me of the dairy whipped cream of my childhood. And nope, I’m not even being paid to say that. I love the stuff, and I think you will too. Look for it at health foods and natural grocers in the freezer section. You’ll defrost the whipped cream in your fridge for a few hours before you use it.

If you can’t find Cocowhip, look for other vegan whipped toppings in a can like Soy-a-Too or (believe it or not) Reddi-Whip brands. 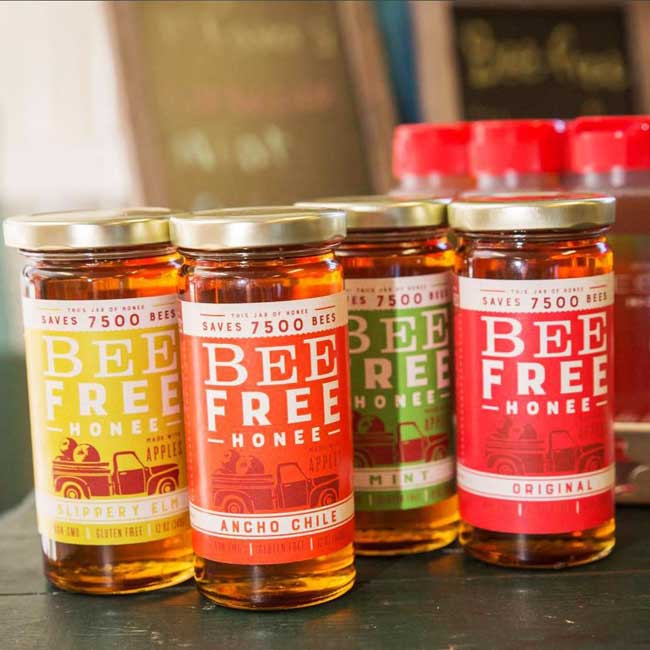 Believe it or not, honey is a hotly debated vegan topic. (Want to know why? Click here.) The condensed version is this: honey comes from bees, and so vegans avoid it. But like other non-vegan ingredients, finding a vegan alternative is simple. Here are a few:

You can also find honey alternatives at health food stores and well-stocked markets. Look for Bee Free Honee or Just Like Honey (Rice Nectar) near where other honey is sold.

When I was a child, holiday dessert tables were never complete without my aunt’s 20-layer gelatin dessert. There’s probably weren’t twenty different layers, but in my child-like mind there was and I loved them all. It wasn’t until I decided to live vegan that I learned how gelatin was made.

Let’s put it this way: After that, I wouldn’t eat gelatin even if I wasn’t vegan. It’s that gross.

Vegan gelatin exists and can be found at most health food and natural grocers in the baking aisle where the other (grosser) gelatin is. The brands that I have found to be the easiest to find are Bakol Jel Desserts and Simply Delish Jel Desserts, and both come in a wide variety of flavors.

A quick note about marshmallows: They contain gelatin which means that delicious looking ooey-gooey marshmallow-topped sweet potatoes will be off limits to your vegan guests unless you use vegan marshmallows. No problem, simply swap out those gelatin-filled mallows for ones made by Dandies. They’re everything you expect a marshmallow to be, without the cruelty.

If you’re not familiar with vegan foods, it might surprise you to know that not all alcohol is vegan-friendly. Some beer and wine go through a clarifying process that uses animal products such as isinglass (fish bladders), egg whites, or gelatin. And because alcohol is commonly exempt from labeling requirements that other food products have, these ingredients are rarely listed on the packaging.

Luckily, there’s a website to help with that. Barnivore is without a doubt the go-to website to check the vegan status of most popular beer and wines.

More good news: Hard liquors like bourbon, whiskey, vodka, gin, and rum are vegan, as are nearly all distilled spirits except those with a cream base or those with honey.

Even better news? You can find vegan-friendly beer, wine, and liquor at almost any store. Here are a few popular brands that are suitable for vegan guests.