Vegans Must Be Environmentalists

In the U.S., the gray wolves have lost their protected status, but in the Antarctic, whales are experiencing a reprieve from Japan’s annual hunt. 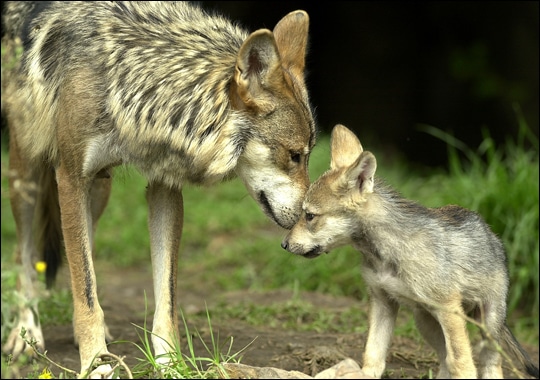 The wolf is due to be delisted from the Endangered Species Act as part of the current U.S. budget proposal, brought about by the actions of congressmen Mike Simpson and Jon Tester from Idaho and Montana, respectively, and endorsed by President Obama.  The congressmen believe the issue of wolf management is best dealt with by individual states.  Meaning, they want to protect their big game hunting and livestock economies.  It doesn’t need discussing here how we feel about livestock production or animal hunting.  Their claim is that the wolf populations have rebounded in their states since being reintroduced to the Rocky Mountain region, and now have become a nuisance.  The cycle of livestock production and its impact on wildlife management has been flawed for centuries.   Wolves were hunted to near extinction in the name of protecting livestock and for their fur- wolves rarely attack humans.  Then they were reintroduced as part of a management program.

To be fair, the wolves have increased their populations in Montana and Idaho- they have plenty of prey provided by humans in the form of livestock and managed game such as elk.  Wolves love easy and fatty prey such as cattle. They certainly don’t mind eating elk and deer either.  The livestock ranchers have a profit to protect and the game hunters don’t want to share.  The result is a circle of death with hunting dogs being killed by wolves as well.  The gray wolf still maintains very low numbers in Washington, Oregon, and Utah, but the delisting from the Endangered Species Act will no longer protect these wolves.

Human’s attempts to regulate the populations of other species frequently have produced unintended and disastrous results.  The fate of the gray wolf is evidence.  We’d have done better to share resources.  The Gray Wolf: Delisted by politicians without the consult of science.

Meanwhile, the Japanese Antarctic summer whale hunt has been suspended– for now.  Their whale quota for the season, usually ending in March, of just under 1,000, has far from been reached thanks to the Sea Shepherd Conservation Society, the anti-whaling “enforcement group.” Sea Shepherd ships chase whalers and employ such tactics as ramming, scuttling, video documentaion, and other nautical (and non-nautical) type maneuvers like blocking the stern so harpooned whales can’t be hauled in.

Since 1986, when commercial whaling was banned by the International Whaling Commission, Japan has been killing whales under the guise of “scientific research.”  Two other nations, Iceland and Norway, outright defy the ban by hunting commercially.  Those who kill whales do so for reasons no different from those who hunt any animal- cultural tradition, economic profit, and sometimes, unfathomably cruel, selfish desire.  Sea Shepherd, who does not work on behalf of the IWC, assumes the responsibility of enforcing the ban- often in a militant fashion.  But how else does one drive whaling ships out of the Antarctic seas toward South America, forcing the hunters to call it quits?  Certainly not by being nice.  Sometimes we have to draw a line in the sand and take a stand for something.  Because sometimes that’s what the situation demands.

The mission of Sea Shepherd should be an inspiration to all who want to make a positive difference in the lives of animals- “To end the destruction of habitat and the slaughter of wildlife in the world’s oceans in order to conserve and protect ecosystems and species.”

A win (an end to whale hunting) and a loss (the delisting of wolves)- both equally significant in terms of the lives they affect.

Live vegan- not only by eating vegan, but also by protecting habitat for species other than ourselves.  Yes, that means us vegans must be environmentalists. Eat local and in season. Be conscious of non-food items you consume, as well.  Protect the wild we have left- it’s barely enough for the animals and plants remaining in it.