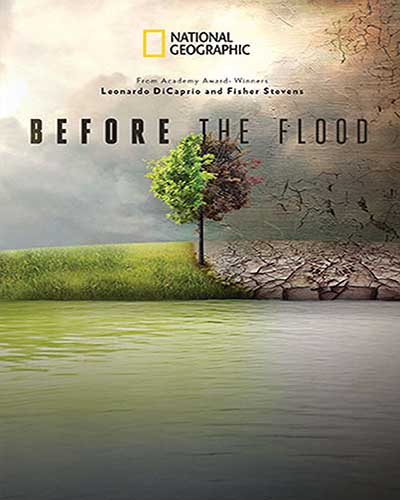 Before the Flood is an account of the changes due to climate change, as well as the actions to prevent the disruption of life on the planet.

Before the Flood is an account of the changes due to climate change, as well as the actions to prevent the disruption of life on the planet.

If you could know the truth about the threat of climate change — would you want to know? Before the Flood, presented by National Geographic, features Leonardo DiCaprio on a journey as a United Nations Messenger of Peace, traveling to five continents and the Arctic to witness climate change firsthand. He expeditions with scientists uncovering the reality of climate change and meets with political leaders fighting against inaction. He also discovers a calculated disinformation campaign orchestrated by powerful special interests working to confuse the public about the urgency of the growing climate crisis. With unprecedented access to thought leaders worldwide, DiCaprio searches for hope in a rising tide of catastrophic news.

From Academy Award-winning filmmaker Fisher Stevens and Academy Award-winning actor, environmental activist, and U.N. Messenger of Peace Leonardo DiCaprio, Before the Flood presents a riveting account of the dramatic changes now occurring around the world due to climate change, as well as the actions we as individuals and as a society can take to prevent the disruption of life on our planet.

Beyond the steps we can take as individuals, the film urges viewers to push their elected officials to support the use of alternative energy sources such as solar and wind power. “We need everyone to demand bold action from their political leaders and to elect representatives who have their best interests at heart, not the interests of corporations to perpetuate a cycle of greed and destruction,” says DiCaprio. “This documentary shows how interconnected the fate of all humanity is — but also the power we all possess as individuals to build a better future for our planet.”

Before the Flood was produced by National Geographic and Ratpac Documentary Films and directed by James Packer. Find out more about the film at beforetheflood.com.

“This is one of many documentaries about climate change; many aren’t much fun, but with DiCaprio at its center, this one offers crucial, current information, as well as a measure of hope. Actor/producer Fisher Stevens, who won an Oscar for his powerful dolphin documentary The Cove, directs Before the Flood, beginning with a reference to Bosch’s painting The Garden of Earthly Delights and then traveling all over the world. DiCaprio starts out with a pessimistic outlook, but he keeps an open mind as he meets and talks with politicians, specialists, and scientists. He finds that, while problems persist, there are also many solutions that have begun to be implemented. Overall, it’s one of the most universal and possibly most helpful and hopeful of the recent climate change documentaries.” – Editorial Review. Common Sense Media. Before the Flood Review. 21 Nov 2016

“The release of Leonardo DiCaprio’s new film Before the Flood, near the end of a US election in which climate change has gone all but unmentioned, is to be celebrated.  As is the fact that it has been made available free online, and within the first 2 days of its release, has already been viewed 3.5 million times, as well as trending on Twitter.  Ah, the power of celebrity.  It powerfully reminds the world of the urgency around climate change, which can only be a good thing.” – Rob Hopkins. Post Carbon Institute. Leonardo DiCaprio’s ‘Before the Flood’: A Review. 2 Nov 2016