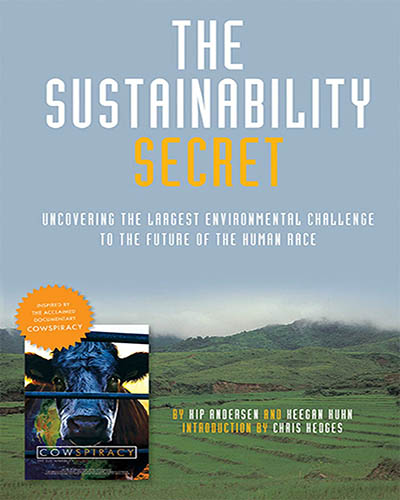 The groundbreaking 2014 documentary Cowspiracy presents shocking truths about the effects of industrial animal agriculture on the planet. The leading cause of deforestation, rainforest destruction, greenhouse gas production, water consumption and pollution, habitat loss, species extinction, ocean dead-zones, topsoil erosion, and a host of other environmental ills, animal agriculture is the biggest issue facing the planet today. And one of the most controversial environmental secrets in the world of conservation.

Filled with anecdotes, statistics, research, interviews with the filmmakers and contributors, and unabridged transcripts from the film, this companion book supplements and expands upon the documentary in every way. With all this and more, The Sustainability Secret reveals the absolutely devastating environmental impact large-scale factory farming has on our planet and offers a path to global sustainability for a growing population.

Kip Andersen is the executive director of Animals United Movement (A.U.M.) Films & Media—a nonprofit dedicated to producing films and media promoting sustainable, compassionate, and peaceful living. He is the co-director of the groundbreaking documentary film Cowspiracy: The Sustainability Secret.

“If you care about the future of all life on this planet, start here. The Sustainability Secret should be a wake-up call for anyone concerned about sustainability; we simply cannot ignore the devastating environmental impact of our diet any longer. The good news—yes, there is good news—is that we make a difference at every meal.” — Will Potter, author of Green Is the New Red

“The Sustainability Secret proves we have the power to slow, if not stop, the madness of environmental destruction and its consequences for all life on Earth. With a clear and deliberate focus on the facts, authors Kip Andersen and Keegan Kuhn expose the environmental community’s stunning willingness to ignore animal agriculture’s destruction of ecosystems. I will carry this book with me because its illustrations demonstrate every essential point as to why animal agriculture must end now and how wonderful it is that we already have its replacement–veganic agriculture.” — Will Anderson, author of This is Hope: Green Vegans and the New Human Ecology

“The Sustainability Secret vividly exposes the single largest contributing factor to our demise and that of other species, which is the consumption of animals and the supportive animal agricultural systems, and then provides a pathway toward a healthier, more peaceful and just planet by re-connecting us to the stark realities of food choice and sustainability, urging all of us to act, and to do so now.” – Dr. Richard A. Oppenlander, researcher, consultant, and author of the award-winning Food Choice and Sustainability and Comfortably Unaware