Horse Exploitation Has to Stop 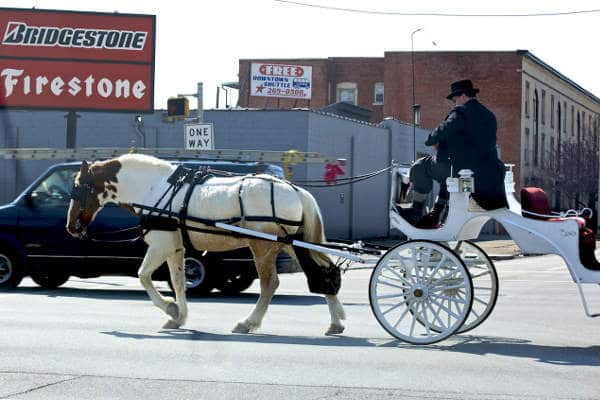 Recently in New York City, another example of why horse carriages don’t belong in a metropolitan area occurred. Spartacus, a Central Park carriage horse, was spooked by a city bus (I can’t imagine why), bucked and started to run. The carriage fell over and he was pinned underneath it. It seems that Spartacus made it out of this situation unscathed (at least physically), but those who don’t agree with a horse carriage ban don’t seem to see this as evidence that one is needed.

Animals are not here for us. “It’s an institution!” isn’t a reason to keep doing something that shouldn’t be done. (Hear that, Liam Neeson?)

On my way to work in the morning, I pass an everchanging cluster of billboards, usually advertising dead animals in the shape of hamburgers, unfunny Adam Sandler movies, or car dealerships. One changed billboard caught my eye – there was the familiar British slogan we’ve all modified for our own use, except this time it said “Keep Calm and Derby On.”

There’s a horse racing track very nearby, so the billboard makes sense. Except when you stop and think about how utterly fucking wrong it is for a horse to be raced until he is no longer able, and then what? Where does he go? What about those horses in the Kentucky Derby this weekend?

Animals are not here for us. “It’s entertainment!” isn’t a reason to keep doing something that shouldn’t be done.

If humanity continued to do things just because they’ve always done them before, we would never progress beyond the elementary, the time-wasting, the difficult, and the simply cruel things in our history. “We’ve always had slaves, so we always will.” “Women can’t vote now, so why should they ever?” “Health care isn’t a right, why make it one?” “Stop trying to invent the telephone, this paper and pen works just fine.”

Horse exploitation is a very clear example of keeping something going because it’s tied into many different things: tradition, entertainment, and (let’s not forget) money. There are new traditions to be made, new entertainment to be found, and different ways to make money.

Leave Spartacus and his equine brothers and sisters out of it.