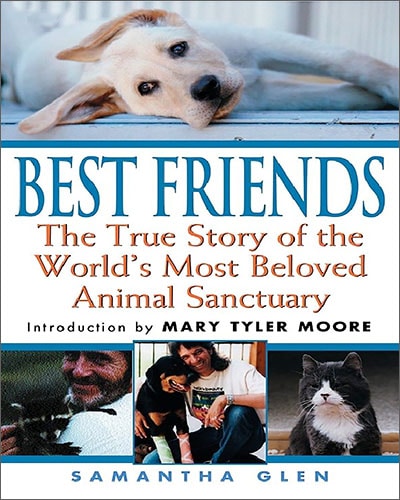 Best Friends: The True Story of the World’s Most Beloved Animal Sanctuary Overview

Discover Best Friends animal sanctuary. It’s a place where every animal is safe and who will never be euthanized.

It all began with a group of young men and women. They pooled every penny they had to buy 3,000 acres of desert in Utah. The sanctuary would go on to become the most famous no-kill animal sanctuary in the world.

A haven for more than 2,000 animals, from the furry to the feathered to the stiff-legged.

The group originated in England in 1966 as the Process Church of the Final Judgment. They relocated animals from its Arizona ranch to property in Kanab, Utah.

Samantha Glen is the co-author of Out of Harm’s Way. She has also written Family: Everyday Stories About The Miracle of Love, which the Family Channel honored with its Seal of Quality.

“…Glen tells the poignant but also hopeful story of the sanctuary’s beginnings as well as the stories of some of the animals that have come to live there. The well-written and informative book also features an introduction to by actress Mary Tyler Moore.” – Booklist

“The largest no-kill animal sanctuary in the country, Best Friends houses between 1,800 and 3,000 creatures–from dogs, rabbits, and birds to sheep, pigs, and horses–75% of which are adopted and many of which have special needs. Located on 3,000 acres in Angel Canyon (formerly Kanab), Utah, the shelter was founded in 1982 by several friends. This is the story of their efforts to execute their grand plan, from locating an appropriate piece of land to building various shelters, taking in ever-growing numbers of abused and abandoned animals, finding a reliable veterinarian, and raising funds needed to keep their huge project afloat. . .readers [are] drawn in by the authors’ 25-city radio tour and 20-city television campaign will find distinctive, memorably drawn portraits of many animals. . .” – Publisher’s Weekly

“…A heartwarming and inspiring tale of love, dedication, and courage, this book belongs in every library where there is interest in environmental issues and animal rights.” – Library Journal