Take Action! No Permit for Hi-Q’s CAFO in Ohio. 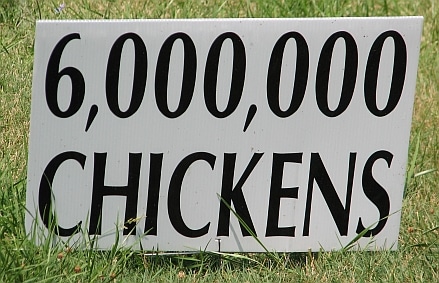 Hi-Q Egg Products wants to build a facility in Ohio for the purpose of commercially exploiting the egg-laying capabilities of hens.  Hi-Q, owned by two men in Iowa, wish to make “liquid egg products,” for use in food service and the commercial food industries.  Basically, they want to make a profit by slaughtering animals, polluting your environment, and hiring people to do heinous work for barely a living wage.

On February 22, the Director of the Ohio Department of Agriculture, Jim Zehringer (a former poultry and fish farmer), will begin reviewing the findings of a state hearing regarding whether or not Hi-Q should be allowed permits to proceed with a 6 million hen operation.

This would be the state’s second largest egg producing facility.  Ohio Fresh Eggs is the largest.  Google Ohio Fresh Eggs– there isn’t any good being said about them. 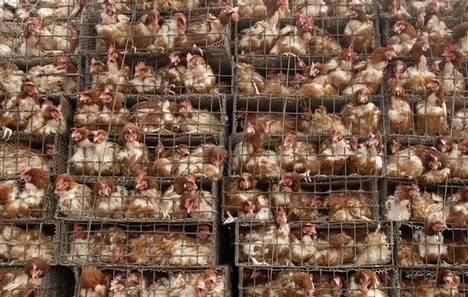 It is estimated that over 60% of the world’s eggs are produced in industrial systems, mostly using battery cages, like these.

Battery cages are typically the size of a file drawer and confine five to seven hens, giving each bird only 67 square inches of floor space – an area smaller than a notebook-sized piece of paper.

The Ohio EPA believes that water will run off the property and contaminate streams leading to Bokes Creek, which drains into the Ohio River and ultimately affects all waters.  An EPA report has found that Bokes Creek  is already contaminated with pollutants from other nearby chicken farms housing  3 million chickens.  Hi-Q claims that their facility is designed for no discharge and will not leak contaminants into streams.  Yes, we’ve all heard that one before.

Just a moment to remind you that these are chickens we’re talking about- animals- just like your dogs and cats- just like you.  Compassion should not be limited to a being’s perceived intelligence.

What you can do:

Ohio residents (and non-residents too, because Ohio likes visitors and would welcome those who wish to relocate) can take immediate action by contacting  Director Jim Zehringer at [email protected] to let him know that Ohio does not need, nor want, yet another factory farm imposing cruelty onto animals, polluting our environment, and endangering human health.

Also, send your comments to the ironically named Ohio Livestock Care Standards Board at [email protected]

Finally, the single most effective method to shutting down Concentrated Animal Feed Operations (CAFO) is to reject the use of sentient beings as food.

Voice your opinion soon, there isn’t much time. The Director begins his review February 22, 2011.

Watch this interesting video to learn more, like why the local residents are silently opposed to the egg producing facility, for fear of being sued.