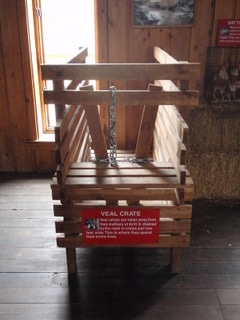 We have received word that the ironically named Ohio Livestock Care Standards Board, has voted 6 to 5 to approve the continued use of veal crates in the state.

Wayne Pacelle of the Humane Society, says that this vote jeopardizes an agreement made last year by the Humane Society and agricultural trade organizations, where a ballot initiative would be halted if agribusiness agreed to certain animal welfare recommendations.

Ohio Agriculture Director Jim Zehringer said the vote can be changed after a comment period in April.

As of now, the standards for keeping baby calves in crates, so that people can profit from and eat veal, are:

[box] [/box] In November, “the board voted 7-4 to require veal calves under 10 weeks of age to be able to turn around, and it voted unanimously to require veal calves 10 weeks and older to be housed in groups of at least two animals per pen, with enough space to turn themselves around.”  And, interestingly, at a subsequent meeting in February, “more than 30 Ohio veal farmers had signed an affidavit saying they did not intend to continue their operations in the state, unless they could confine the calves individually for the first 10 weeks of age.”  Money talks, integrity walks.

Farm Sanctuary’s Gene Baur has released a statement in response to Ohio Livestock Care Standards Board.  Here’s a snippet:

Monday’s vote by the Ohio Livestock Care Standards Board (OLCSB) to allow veal calves to be confined in crates so tightly that they can’t even turn around for most of their lives violates the widely publicized agreement that was reached last June between agribusiness interests, including the Ohio Farm Bureau Federation, and the humane community to avoid a ballot initiative that would ban the inhumane confinement of animals in veal crates, gestation crates and battery cages across the state. By endorsing veal crates, the OLCSB has demonstrated an interest in upholding the status quo at the expense of improving animal welfare. We urge the OLCSB to reverse its vote and to act in accordance with June’s compromise agreement. Otherwise, the humane community will have no option other than to move forward with the initiative.

The initiative being a statewide ballot measure banning veal crates, gestation crates, and battery cages.  Perhaps the initiative was the better idea?  Certainly better than the creation of the ironically named Ohio Livestock Care Standards Board.

Do your part to end the heinousness of the veal business:  decrease demand, (go vegan) reject the use of sentient beings as food- then get to getting vocal about it.

If you missed the First Take of Ohio’s negligence at regulating agribusiness using the ironically named Ohio Livestock Care Standards Board, be sure to check it out to find out what you can do to help.

Charleen Angle writes for Your Daily Vegan as the Resident Vegan Contributor.  An unapologetic vegan, her writing refects her strong and passionate voice for the billions of animals that die needlessly each year.