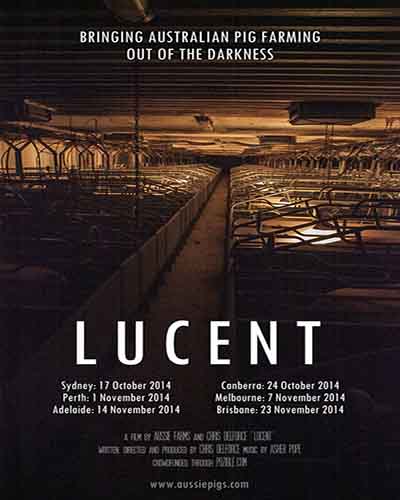 Lucent is a feature-length documentary that explores the darker side of Australia’s pig farming industry through a combination of hand-held and hidden camera footage, highlighting the day-to-day cruelty accepted by the industry as standard practice.

Lucent was produced and directed by Chris Delforce. Find out more about the film at Farm Transparency Project.

“This is the eye-opening footage animal activists claim is happening in pig farms across Australia. The footage, allegedly shot across 50 farms and piggeries across the country, shows pigs confined to sow and farrowing stalls, some with dead babies nearby and others with bleeding sores. Others appear distressed and in pain. The footage forms the basis for a new feature-length documentary, Lucent, which was compiled by animal rights activist Chris Delforce in the hope it would “make people sit up and question where their food really came from.” Lucent. . .also focuses on practices such as prolonged confinement, surgical mutilation without pain relief, as well as “filthy and crowded ‘free range’ sheds and the use of gas chambers at all major pig slaughterhouses”. And activists claim the most shocking thing of all is that the treatment and confinement of the animals in this way is totally legal.” – Debra Killalea. news.au.com. Lucent Documentary on Australia Pig Farms Reveals the True Price We Pay for Bacon. 8 October 2014

“A new documentary vows to expose the dark underbelly of pig farming and allegedly contains video of pigs sleeping in their own urine, buckets of stillborn piglets and the bashing of animals with metal rods. Animal rights activist Chris Delforce has put together a documentary called Lucent which contains footage taken from inside 50 Australian piggeries and slaughterhouses.

The disturbing footage allegedly includes the confinement of pigs in cramped cages, mutilation of piglets such as cutting notches into their ears and cutting off their tails, and castration – all without the use of pain relief.

‘They’re confined in filthy conditions where pigs are forced to sleep in their own urine and waste,’ Mr Delforce told Daily Mail Australia.