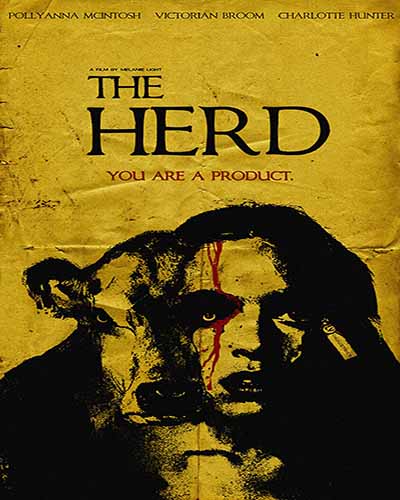 The Herd is a short horror film that replaces cows with humans, and by doing so shines a light on the suffering in the dairy industry.

The Herd is a short horror film that replaces cows with humans, and by doing so shines a light on the suffering in the dairy industry.

The Herd is different from all the other short horror films. It embraces and extenuates not just filmmaking as a craft but also as a moralistic form of storytelling. It exists as not just a dark and transgressive horror short it also asks questions as to how we approach the sentient of other beings and the importance of the concept of individual freedom in modern society.

A number of kidnapped and trafficked women find themselves imprisoned in a squalid medical facility. For Paula, her continued survival relies on her basic human function. Escape, on any level, is seemingly impossible as the women are condemned to a life of enforced servitude at the whims of their captors; for one reason only – their milk.

The Herd replaces female cows with female humans, and by doing so hopes to promote a greater understanding of the suffering inflicted upon cows in the dairy industry.

The Herd is a short horror film that depicts graphic scenes which may be disturbing to some viewers. Please proceed with caution and awareness.

The Herd was written by Ed Pope and directed and produced by Melanie Light for Eat Your Heart Out Films. You can learn more about the film at www.melanielight.co.uk.

“In its short running time, just over 20 minutes, The Herd proves to be a deeply grueling viewing experience. Director Melanie Light pulls no punches, deftly avoiding falling into the realms of torture-porn and misogyny due to her matter-of-fact approach and distinct lack of sensationalism. The grimy aesthetic and bleak production design lean towards realism. The systematic cruelty is visceral, but its treatment is clinical, mundane even, which makes it all the more startling and effective. One of the most chilling aspects is the indifferent attitude of the brutish guards and the coldly detached behavior of the nurse (Pollyanna McIntosh) involved in the procurement of the women’s milk. Its brevity makes it feel like part of a bigger story, but to stretch it out to feature-length may have done a disservice to the impact of the message. While a lack of characterization could be the downfall of other titles, in The Herd it highlights how the individuality, dignity, and very humanity of these women have been stripped away.” – James Gracey. “The Herd.“ Exquisiteterror.com. 20 April 2015

“The Herd may be a short film, but it is certainly as hard-hitting as a feature film can be. Its concise format makes it easier for people to consume and even though the horror lasts only a short time on screen, the real horror, in reality, lasts a lifetime…A strong cast and screenplay amid gritty, damp, dark, and brutal settings create a tense thriller that ultimately contrasts its shocking but not surprising outcome featuring the talents of actress Sarah Jane Honeywell. The film shows us that the end product often hides the grim reality of what came before to produce it and both Light and Pope with their talented cast and crew have achieved their goal.” – Bat. “The Herd – A Short Film By Melanie Light [Grimmfest 2014 Review].” Horrorcultfilms.co.uk. 31 Oct 2014

“The parallels The Herd draws between female humans and female cows are eye-opening, shocking, and will hopefully make people question their food choices. Also clever is how this film briefly questions how so-called feminists can truly be feminists if they still consume dairy products. Why support (the) subjugation of any females, even if they are a different species? That’s like women attacking women!” – Sarah E. Jahier. “The Herd, The First Feminist Horror Film.” Spookyvegan.com. 2 Feb 2016