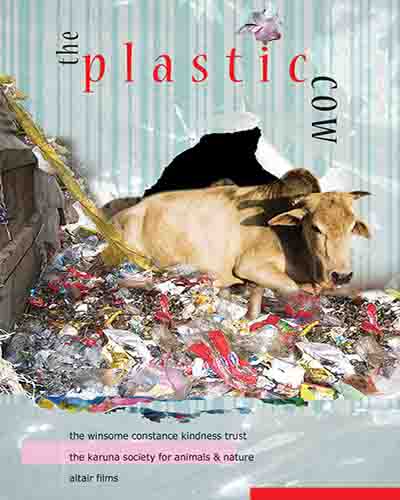 The Plastic Cow focuses on the plight of cows, who are increasingly becoming unwitting victims of the ubiquitous plastic bags, which we use and carelessly discard every day.

It’s very common now to find scores of cows, stray and abandoned by their owners because they’re unwilling to feed them, walking about unattended in cities and towns and, usually, congregating around garbage dumps. Among the junk they feed on there are the plastic bags that we’ve put our garbage and kitchen waste in and discarded. And, because cows can’t open these bags, they eat them whole for the rotting scraps of food inside them.

Unlike us, and many other animals, cows have a complex digestive process that doesn’t allow these plastic bags to pass out of their system. As a result, the toxic plastic accumulates inside their stomachs for years and, eventually, leads to a slow and painful death of the animal. Unless, of course, the cow is operated on and all the plastic waste is extracted from its stomach. In a surgery shot for the film, 53 kilos of plastic waste were extracted from one cow’s stomach! But, surgery, which is expensive and lasts many hours, is not the solution to this problem.

While this documentary looks at various issues, such as the cultural and religious importance of cows and the widespread use of plastic in almost every aspect of life today, and the amount of garbage we generate every day, the focus of the film is on the human cruelty to cows, who suffer because of our excesses and carelessness.

The Plastic Cow was directed by Kunal Vohra and produced by Karuna Society & Kindness Trust. Find out more about the film at karunasociety.org.

“Why is the fact that cows are consuming plastic in India relevant to the rest of the world? According to the film, plastic makes up the largest amount of waste on the Earth. At some grocery stores, thousands of plastic bags are used every day, and many people have entire drawers of old plastic bags at home. Some stores have tried to discourage plastic bag use by charging customers for bags, but many people are willing to buy them. If not saved for reuse, these bags end up in our garbage dumps, or worse, are just randomly tossed into the streets. While most countries don’t have a large roaming cow population as India does, our animals, even our own outdoor cats and dogs, often end up ingesting this waste. The reason plastic waste is so prevalent is because, unlike other forms of waste, it takes eons to degrade. To the Earth, it’s like a cold that you just can’t shake. The Plastic Cow offers strategies that could help reduce the problem of plastic, especially in the context of ensuring animals’ safety, though these strategies inevitably demand cooperation from those who use plastic.” – Erica Roberts. The Mindful Word. The Plastic Cow. 27 November 2013