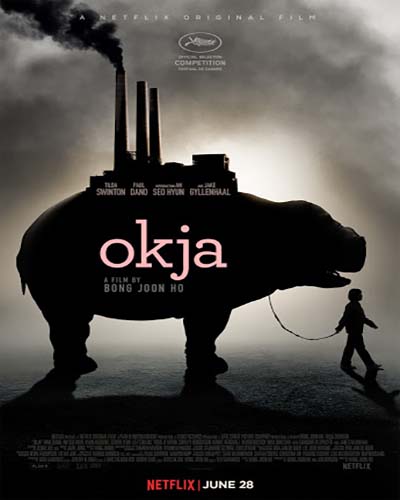 Okja looks at the bond between man and animal, creating a distinct and layered vision of the world that addresses the animal inside us all.

Okja looks at the bond between man and animal, creating a distinct and layered vision of the world that addresses the animal inside us all.

For 10 idyllic years, young Mija (An Seo Hyun) has been caretaker and constant companion to Okja—a massive animal and an even bigger friend—at her home in the mountains of South Korea. But that changes when a family-owned multinational conglomerate Mirando Corporation takes Okja for themselves and transports her to New York, where image obsessed and self-promoting CEO Lucy Mirando (Tilda Swinton) has big plans for Mija’s dearest friend.

With no particular plan but single-minded in intent, Mija sets out on a rescue mission, but her already daunting journey quickly becomes more complicated when she crosses paths with disparate groups of capitalists, demonstrators, and consumers, each battling to control the fate of Okja…while all Mija wants to do is bring her friend home.

Deftly blending genres, humor, poignancy, and drama, Bong Joon Ho (Snowpiercer, The Host) begins with the gentlest of premises–the bond between man and animal–and ultimately creates a distinct and layered vision of the world that addresses the animal inside us all.

Okja is a Plan B Entertainment, Lewis Pictures, and Kate Street Picture Company production in association with Netflix. Find out more about the film on Wikipedia.

“A century from now, the citizens of the future will look back and judge the current era for our eating habits. Oddly enough, even though many in the filmmaking community have strong feelings about respecting animals’ rights not to become dinner, the cause seldom finds its way on screen, which is perhaps the thing that sets “Okja” apart from, say, Paramount’s “Monster Trucks” — well, that and a potbellied Jake Gyllenhaal playing an in-your-face TV host; a guerrilla animal-rights group led by Paul Dano; and a double-dose of Tilda Swinton as a pair of ruthlessly competitive twins.” – Peter Debruge. Variety. Cannes Film Review: Okja. 19 May 2017

“How can this movie’s producer – Netflix – ever be content with just letting it go on the small screen? Apart from everything else, the digital effects are spectacular and the visual images beautiful. It’s a terrible waste to shrink them to an iPad. Okja is a Korean director Bong Joon-ho’s new “creature feature”, rather like his 2006 film The Host. But it’s also a lovely family action-adventure about a girl and the giant hippoesque pig, named Okja, that she has come to love like family. This exciting, charming, sweet-natured movie gives its audience heart-meltingly tender moments showing us their magical life together in the Korean mountains. Then it whooshes us to New York City and a world of cynicism, menace, and danger. This movie just rattles along with glorious storytelling gusto in the spirit of Roald Dahl, ET creator Melissa Mathison and Dodie Smith, author of 101 Dalmatians.” – Peter Bradshaw. The Guardian. Okja review – giant Korean pig plus Tilda Swinton equals glorious family adventure. 19 May 2017

“Okja stands firmly against many things that plenty of us don’t like: Big, greedy corporations, GMOs, people who seek to run whole countries as if they were businesses, and basic human cruelty. But this is one of those films where we’re persuaded to love the creature in question, only to see it abused so the filmmaker can drive home his points. It invites viewers to cheer the bad guys and feel superior for doing so.” – Stephanie Zacharek. Time. Review; Bong Joon Ho’s Okja. 19 May 2017