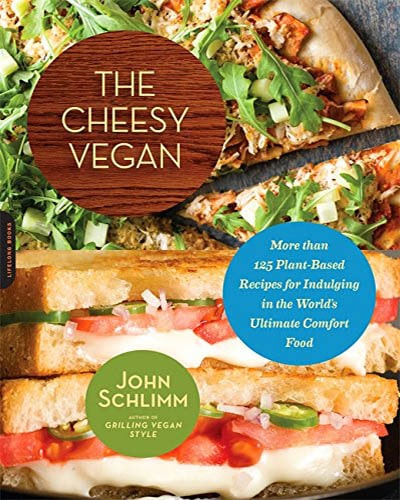 Long regarded as the missing link in the plant-based world, vegan cheese has come home to Main Street!

With more than 125 recipes for every cheesy craving, The Cheesy Vegan has you covered from breakfast to lunch to a hearty dinner with family and friends. From easy recipes for everyday cheeses (including Cheddar, Swiss, mozzarella) to ultimate comfort food like Mac ‘n’ Cheese, Cafe Broccoli & Parmesan Quiche, Triple Your Pleasure Fondue, and the Cheesecake Extravaganza, you can include in all your cheesy favorites … with none of the dairy.

John Schlimm is a member of one of the oldest brewing families in the US. He is the international award-winning author of several books, including The Ultimate Beer Lover’s Cookbook (awarded the “Best Beer Book in the U.S.” and “Best Beer Book in the World” by the Gourmand Awards), Harrah’s Entertainment Presents…The Seven Stars Cookbook, Tipsy Vegan, and Grilling Vegan Style, among other titles.

He holds a Master’s degree from Harvard University and travels the country speaking about cooking, entertaining, and public relations. He lives in Pennsylvania.

“Even omnivores may want to give John Schlimm’s…latest vegan endeavor a look. Vegans who were cheese lovers in a former culinary life will likely find this to be nothing short of revelatory. Schlimm’s cheeses are all approachable—even those who usually steer clear of the kitchen may take a gander. A terrific addition to any vegan’s library.” – Publishers Weekly. 23 Sept 2013

“Newer vegans or those who really really miss cheese will adore this cookbook.” – EntertainmentRealm.com. 17 Oct 2013

“This cookbook offers recipes that you’ll want to try, whether vegan or not.” – Edible Charlotte, Winter issue.

“Bake a cheesecake from the cookbook and take it to a party. You’re sure to be a hit.” – EatDrinkBetter.com 24 Nov 2013