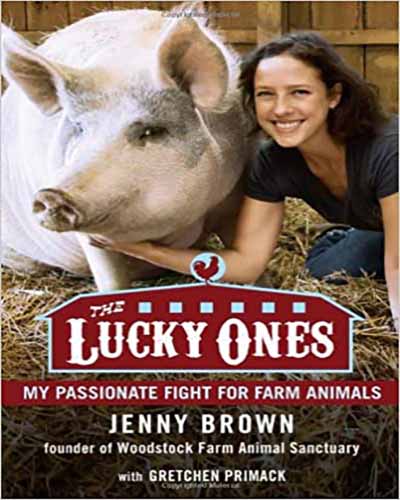 The Lucky Ones: My Passionate Fight for Farm Animals reveals shocking statistics about the prevalence of animal abuse throughout America’s agribusinesses.

The Lucky Ones: My Passionate Fight for Farm Animals reveals shocking statistics about the prevalence of animal abuse throughout America’s agribusinesses.

The Lucky Ones Overview

Jenny Brown was ten years old when she lost a leg to bone cancer. Throughout the ordeal, her constant companion was a cat named Boogie. Years later, she would make the connection between her feline friend and the farm animals she ate, acknowledging that most of America’s domesticated animals live on industrialized farms, and are viewed as mere production units. Raised in a conservative Southern Baptist family in Kentucky, Brown had been taught to avoid asking questions. But she found her passion and the courage to speak out.

The Lucky Ones introduces readers to Woodstock Farm Animal Sanctuary which Brown established with her husband in 2004. With a cast of unforgettable survivors, including a fugitive slaughterhouse cow named Kayli; Albie, the three-legged goat; and Quincy, an Easter duckling found abandoned in New York City, The Lucky Ones reveals shocking statistics about the prevalence of animal abuse throughout America’s agribusinesses.

Blending wry humor with unflinching honesty, Brown brings a compelling new voice to the healthy-living movement—and to the vulnerable, voiceless creatures among us.

Jenny Brown is the co-founder and director of the Woodstock Farm Animal Sanctuary—a not-for-profit organization and farm animal shelter—a vegan animal rights activist, and previously worked as a television producer.

Poet and journalist Gretchen Primack is the author of the chapbook, The Slow Creaking of Planets.

“For all the animals she has taken into her sanctuary and cared for, and the awareness she has raised and continues to raise for farm animals, Jenny Brown certainly proves that one person can make a difference. I am hopeful that her story will inspire many more people like it did with me, and that Woodstock Farm Sanctuary will continue in its great success and achievements for farm animals in need.”

Continue to the full article >> The Story of Woodstock Sanctuary

“Until last summer, when I read The Lucky Ones: My Passionate Fight for Farm Animals, by co-founder and owner Jenny Brown. The book was a page-turner, from Jenny’s inspirational childhood to her own awakening veganism. What I loved most about the book, however, was her anecdotes of all the resident animals at the sanctuary. And no other anecdote pushed me to visit the sanctuary more than the story of Dylan, the veal calf.”

Your Daily Vegan supports the vital work that animal sanctuaries do. Sanctuary Spotlight was launched to tell the stories of animal sanctuaries all over the world and highlights not only the animals who live at these places but the people who run them, too.

Experience the magic of a sanctuary for yourself. Find a sanctuary near you in the extensive Animal Sanctuary Directory or explore ways you can help by visiting Ways to Help Animals.