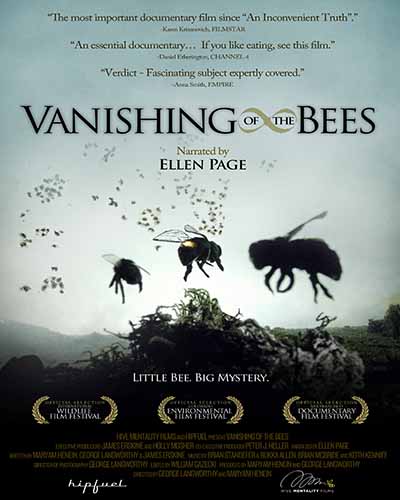 Vanishing of the Bees

Vanishing of the Bees examines the alarming disappearance of honeybees and the greater meaning it holds for mankind & mother earth.

Vanishing of the Bees

Vanishing of the Bees examines the alarming disappearance of honeybees and the greater meaning it holds for mankind & mother earth.

Honeybees have been mysteriously disappearing across the planet, literally vanishing from their hives.

Known as Colony Collapse Disorder, this phenomenon has brought beekeepers to crisis in an industry responsible for producing apples, broccoli, watermelon, onions, cherries, and a hundred other fruits and vegetables. Commercial honeybee operations pollinate crops that makeup one out of every three bites of food on our tables.

Vanishing of the Bees follows commercial beekeepers David Hackenberg and Dave Mendes as they strive to keep their bees healthy and fulfill pollination contracts across the U.S. The film explores the struggles they face as the two friends plead their case on Capital Hill and travel across the Pacific Ocean in the quest to protect their honeybees.

Filming across the US, in Europe, Australia, and Asia, this documentary examines the alarming disappearance of honeybees and the greater meaning it holds about the relationship between mankind and mother earth. As scientists puzzle over the cause, organic beekeepers indicate alternative reasons for this tragic loss. Conflicting options abound and after years of research, a definitive answer has not been found to this harrowing mystery.

Vanishing of the Bees was produced by True Mind and directed by James Erskine. Find out more about the film at vanishingofthebees.com.

“Vanishing of the Bees takes an intense look at a seemingly dire situation, yet the film is punctuated with timely humor to lighten the mood. And despite the many hurdles faced by beekeepers, there may be a glimmer of hope for bees in the telling of their story. Humans have worshiped bees throughout the centuries and looked to them for signals of things to come. If the bees are trying to tell us something, Vanishing of the Bees has captured their message, deftly portraying a saga that plays upon human emotion and stirring a deep-seated connection to bees that stands 10,000 years strong.” – Katie Hoppe. Civil Eats. Vanishing of the Bees Reveals an Ongoing Struggle for Pollinator Populations. 5 July 2011

Honey is one of the most hotly debated topics among vegans and non-vegans alike.

Vegans avoid honey and bee products because they are made from the lives of bees. This makes sense. After all, vegans do not consume (to the extent that is possible and practical) animal products, and a bee is an animal. Others disagree and believe that avoiding minutia ingredients like honey can harm the vegan movement by appearing too rigid or difficult.

This line of reasoning is ridiculous and doesn’t give people enough credit. Worse, it’s faulty information and only ends up confusing people who are unfamiliar with what veganism is and means.

So, does the cultivation of honey and bee products hurt animals and the environment? Are insects even animals? Are vegans just being extreme by avoiding honey? What is the big deal anyway? To answer these questions, we must first take a look at who we obtain honey from, how it’s processed, and whether or not there are better choices available to us.

Spoiler alert: There are.

Continue to the full guide >> Is Honey Vegan?