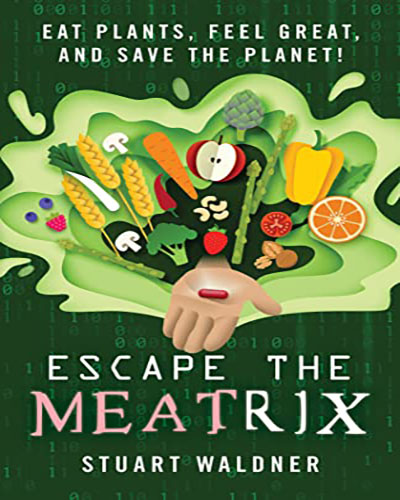 What if you suddenly discovered you were trapped inside a dystopian cult of oppression, murder, and profit—and that your greatest source of calories was an artificially invented diet created by powerful lobbies, designed to line the pockets of the 1% at the cost of your own health and the planet’s very survival? What would you do?

Escape the Meatrix chronicles Stuart Waldner’s eye-opening battle against climate change as he exposes the real reason veggies are more expensive than a burger (it’s not what you think); the shocking list of diseases that a plant-based lifestyle can slow, prevent, or even cure; and how America’s declining health is linked directly to corporate profit.

We might not like the truth, but the cost of ignorance is far too high. Will you take the blue pill and let the planet burn? Or will you take the red pill, open this book, and Escape the Meatrix?

Stuart Waldner didn’t set out to be an activist. After two decades of exploring Earth’s greatest wonders and connecting with sacred sites around the globe, he transitioned to a plant-based lifestyle in 2008. The better he felt, and the more he learned about the statistical connections between our dietary choices and the worldwide crises we’re about to face, the more he felt called to wake people up—for our health and for the planet. When he’s not working or playing with his dogs, he enjoys cooking and eating plant-based foods, running, and restoring windows in his 128-year-old Victorian home.

“Escape the Meatrix is a must-read for anyone who cares about the impact of their food choices. When it comes to eating animals and animal-derived products, false narratives passed down generationally mold us to believe that exploiting and killing animals for food is natural, normal, and necessary. This book will show you how those beliefs are aiding in the destruction of our planet and our morality when it comes to our treatment of non-human animals, and how we can be the change we need to be for future generations.”
– Jenny Brown, lecturer, animal rights activist, author, and co-founder of Woodstock Farm Sanctuary

“Overall, Escape the Matrix is a good book that can enlighten you about our choices in life. It is packed with overwhelming scientific evidence which supports how switching to a plant-based lifestyle can be the best thing we can do for our health and to save the planet. More importantly, Stuart sends out the message that even a tiny change can make a huge difference for future generations.” – Nikki Scott, Books That Make You. Choose the red pill and Escape the Meatrix.