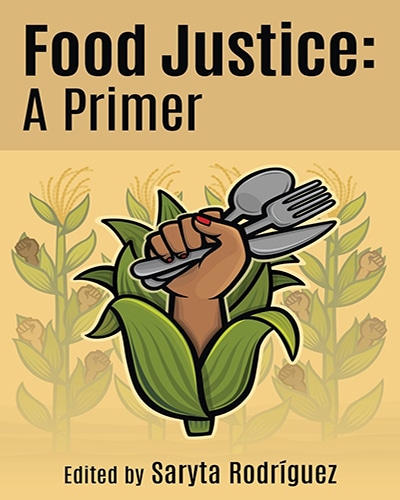 Food Justice: A Primer, edited by Saryta Rodriguez, is a collection of essays by activists,  academics, farmers, and others involved in the Food Justice Movement examining food justice and food sovereignty from a variety of angles.  These essays range in scope and tone from personal, hands-on experiences to macro-level observations of how communities’ ability to both access healthful, justly-produced food and determine for themselves how they are fed can be improved upon, including efforts currently underway toward these ends.

For too long, the Food Justice Movement has been senselessly divided between those who focus on the rights of humans and those who uphold the rights of nonhumans. In truth, the most just and efficient way forward to promote this cause is for these communities to come together and work in solidarity with one another, as myriad individuals and organizations around the world demonstrate with their hard work and careful analysis. This book aims to illustrate why this is necessary while confirming that it is possible, in hopes of inspiring further cooperation and collaboration between seemingly disparate causes under the umbrella of Food Justice.

Saryta Rodríguez is an author, editor, and social justice advocate. Their past writings have focused on food justice, veganism, race, and gentrification. Saryta is the author of the book Until Every Animal is Free (October 2015) and also contributed an essay, “Move to Berkeley! and Other Follies,” as well as part of the Introduction (regarding the distinction between intersectionality and diversity) to Veganism in an Oppressive World: A Vegans-of-Color Community Project (published in November 2017 by Sanctuary Publishers). Saryta currently edits for Sanctuary Publishers, while also accepting unrepresented clients. Originally from Bay Shore, New York, they currently reside in Harlem.

“This is an incredibly urgent intersection that needs to be addressed by both the vegan/animal rights movement and greater food justice movement. Rodriguez hits the nail on the head – we cannot solve one without the other. Animal rights activists need to understand that getting the world to “go vegan,” especially without consideration as to where our plant foods come from, will not automatically fix local, national, and global systems of food production and redistribution. Meanwhile, food justice activists need to understand that the production and consumption of animal products works directly against their own objectives. I’m thrilled that there is finally a book that addresses these discrepancies to both audiences. This is a new favorite that I will definitely be recommending to all my friends and colleagues.” – Karla R Vargas, co-founder of La Raza for Liberation

“Food Justice: A Primer critically examines the overlapping connections between various liberation movements, managing to do so unapologetically yet accessibly. This is the perfect read for anyone who cares about changing the world.” – Jasmin Singer, Senior Editor of VegNews Magazine, co-host of the Our Hen House podcast

“With 7.5 billion people on the planet today, there has never been a stronger disconnect between what we choose to eat and the impact those choices have on our planet and the living beings who inhabit it. Food Justice: A Primer draws critical connections between agriculture’s environmental impact, food scarcity, inequality, and justice for all– human and non-human alike. This powerful, collaborative effort is a must-read for anyone who eats.” – Hope Bohanec, Executive Director of Compassionate Living, Project Manager at United Poultry Concerns

“This incredible book is thoughtful, inclusive and comprehensive and provides the requisite readings and perspectives to fully understand and address the issues and challenges before us – locally and globally. Most importantly, it is a call to action that resonates with my favorite three words: Si Se Puede!” – Stephen Ritz, Top Ten Finalist of the Global Teacher Prize, Founder of Green Bronx Machine