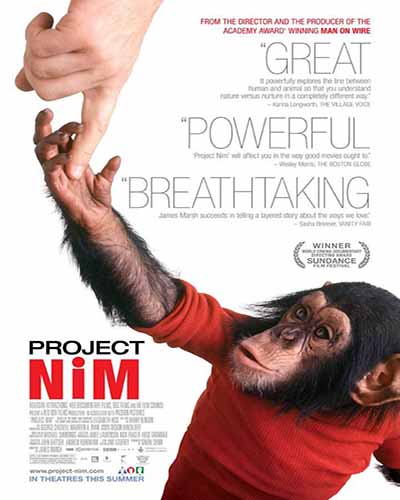 From the Oscar-winning team behind “Man on Wire,” Project Nim tells the story of the chimpanzee who was the focus of a landmark experiment to show that an ape could learn to communicate with language if raised and nurtured like a human child. Combining recent testimony from key participants with dramatic imagery and newly discovered archival film from the 1970s, the feature documentary follows Nim’s extraordinary journey through human society, chronicling his enduring impact on the people he meets.

Winner of the World Cinema Documentary Directing Award at the 2011 Sundance Film Festival and based on the book “Nim Chimpsky: The Chimp Who Would Be Human,” by Elizabeth Hess, Project Nim is an unflinching and unsentimental biography of an animal that science tried to make human. What it reveals about his true nature – and humanity’s – is comic, revealing, and profoundly unsettling.

In 1973, at the Institute for Primate Studies in Oklahoma, a baby chimp is born. A few days later, his mother is knocked down by a tranquilizer, and her screaming baby is seized and placed into the arms of a new human “mother.” Thus begins Project Nim, a university-funded experiment to show that a chimpanzee can learn to communicate with language if raised like a human. Under the auspices of Columbia psychology professor Herb Terrace, the chimp, Nim, is brought to NYC to live with Stephanie LaFarge, one of Terrace’s former students.

Though LaFarge knows next to nothing about chimps, her bond with Nim is immediate, but the collateral damage to her home and family eventually becomes a problem. Displeased with Nim’s unstructured upbringing, Terrace enlists psychology student Laura Petitto to ferry Nim back and forth to a Columbia classroom and teach him sign language. Eventually, he moves Nim and Petitto to the Delafield Estate, a Riverdale mansion owned by Columbia. As Nim learns to communicate using dozens of signs, the media latches on to Nim’s story, resulting in a cover piece in New York magazine.

Project Nim was produced by Lions Gate and directed by James Marsh. Find out more about the film at hbo.com.

“Project Nim, a new documentary by James Marsh, is a probing, unsettling study of primate behavior, focusing on the complex dynamics of power, sex, and group bonding in a species whose startling capacity for selfishness and aggression is offset by occasional displays of intelligence and compassion.” – A.O. Scott. The New York Times. Some Humans and the Chimp They Loved and Tormented. 7 Jul 2011

“Project Nim, a fascinating documentary, follows the life of a chimp named Nim Chimpsky as it’s raised like a human baby and then shuttled from one set of “parents” and “homes” to another. The chimp emerges from this experience as a more admirable creature than many of its humans.” – Roger Ebert. “Project Nim Movie Review.” Rogertebert.com. 6 Jul 2011

“I’ll be forever grateful to this movie for introducing me to Nim’s story, a tale so powerful and suggestive that it functions as a myth about the ever-mysterious relationship between human beings and animals.” – Dana Stevens. “Project Nim: A shattering documentary about a chimpanzee raised as a human.” Slate. 8 Jul 2011

“Based on a 2008 book by journalist Elizabeth Hess, the riveting Project Nim takes up cudgels on behalf of Nim Chimpsky, a chimpanzee roguishly named for MIT linguist Noam Chomsky. In the early 1970s, baby Nim was recruited — meaning, torn from his mother’s breast — by Columbia University researcher Herbert Terrace to be taught American Sign Language, the better to rebut Chomsky’s claim that language is unique to humans. That’s about as far as roguish goes in a story that plays out as a tragedy for the chimp while shining a harsh light on the hubris of those who tried to “humanize” him.” – Ella Taylor. “‘Project Nim’: A Chimp Learns, And Humans Don’t.” NPR. 7 Jul 2011