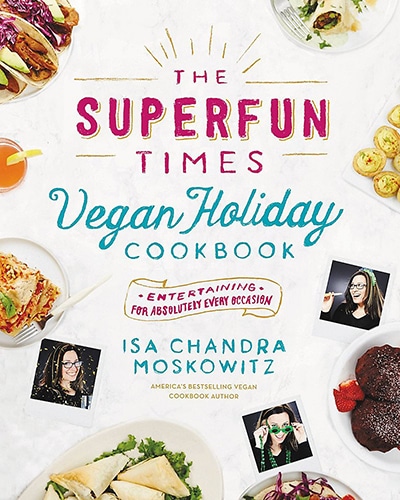 The Superfun Times Vegan Holiday Cookbook is here to prove that making festive vegan food for any occasion can be easy, delicious, and superfun.

Gone are the days of stressing over how to please family and friends with different dietary needs. Bursting with knock-your-socks-off, mind-bogglingly tasty vegan recipes for Cinnamon Apple Crepes, Cheeseburger Pizza, Biscuits and Gravy, Churro Biscotti, and so much more, The Superfun Times Vegan Holiday Cookbook will make everyone at your table happy-even meat eaters and the gluten challenged.

Isa provides everything you need to get your party started, from finger food and appetizers to casseroles, roasts, and dozens of special sides. Then comes a throng of cakes, cookies, cobblers, loaves, pies, and frozen treats to make you feel like the best dang vegan cook in the world.

You’ll start with New Year’s, stop for Valentine’s Day on the way to Easter and Passover, party down from Cinco de Mayo through the Fourth of July, and cook through Thanksgiving, Hanukkah, and Christmas. And with more than 250 seasonal recipes, you’ll mix, match, and remix for every celebration in between–filling your life with holiday cheer the whole year round.

Isa Chandra Moskowitz is the best-selling author of the hit books Isa Does It, Veganomicon, Vegan With a Vengeance, and many other titles. In 2014, she opened her first restaurant, Modern Love, in Omaha, Nebraska.

“The book is set up according to seasons, starting with the New Year. Moskowitz gives home cooks options for both New Year’s Eve and New Year’s Day brunch. She gave thought to ingredients, so black-eyed peas said to be good luck on a New Year’s Day menu, make appearances, including in a vegan Hoppin’ John bowl…Moskowitz is known for her baked goods and her baking-focused cookbooks, and holiday baking is no exception. Nearly every section includes at least a few breads, pies, cookies, and other sweets.” – Sarah Baker. “Chef’s ‘Superfun’ vegan cookbook for special occasions doesn’t stop at Christmas and Hanukkah.” Omaha World-Herald. 14 Dec 2016

“First of all, the book is huge. There’s that immediate vibe of great value when you feel the weight of it–which sounds lame but is true, and you know it. Everything from New Year’s day to Cinco de Mayo to Christmas and any possible occasion for gathering in between is covered, so there’s a lot of recipes here. The photography is sharp, bright, super clean without feeling sterile, and just so appetizing. I immediately turned to the harvest-y/festive chapters on Thanksgiving and winter holiday foods when I got it, and there are great recipes for classics like stuffing, mashed potatoes, Christmas cookies, and even a vegan “roast.” But there’s so much good stuff in this book that you could just make because you feel like it.” – Laura Wright. “Banana Eggnog Pancakes from Superfun Times Vegan Holiday Cookbook.” The First Mess. 30 Nov 2016

“Vegan food goddess extraordinaire, her cookbook does not disappoint with over 250 recipes. Each holiday, from New Year’s Day and Chinese New Year to Cinco de Mayo and Hallowe’en, she’s got your holidays covered. I love Isa’s recipes so it is no shock that I love this cookbook, with recipes that are a bit more glam than her last book, Isa Does It. If you want recipes to impress…this is where I’d turn to first.” – Janet. “Candy Cane Fudge Cookies + Superfun Times Vegan Holiday Cookbook Giveaway.” The Taste Space. 17 Dec 2016